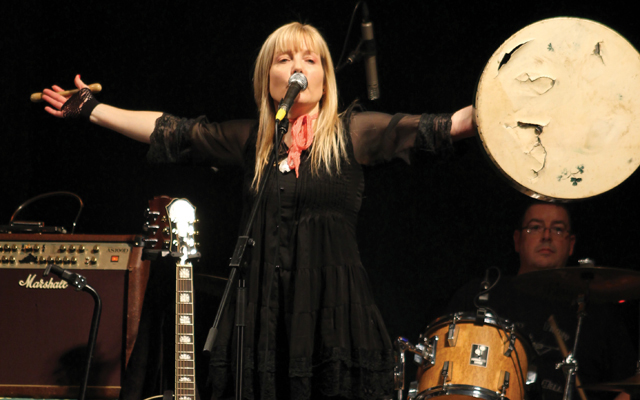 Its members have been playing together for more than 20 years, but now Celtic folk group The Band from County Hell is enjoying bringing its sound to new audiences after being voted top newcomer in a recent contest.
Despite having six critically acclaimed albums to its name, the band, which hails from Sleaford, won the public vote out of forty-seven new acts appearing on the Introducing Stage at The Great British Folk Festival 2014. Now the six-piece group is set to play the main stage at this year’s event when it comes to Butlins, in Skegness, on Sunday 6th December.

For band founder Steven McLelland – who also manages his own hair salon Designers Hair and Beauty – it’s a dream come true. He’s been passionate about music since an early age; as well as singing he plays the guitar, mandolin and mouth organ and is also the group’s main songwriter.

“It’s quite amusing really,” laughs Steven, who goes under the stage name Jock.

“We’ve been playing together for more than twenty years, yet we were up on the Introducing stage.

“What’s better is that the winner was chosen by a public vote, and there were some really fantastic bands in the running – we can’t wait to play the festival again.”

The Band From County Hell is very much a family affair, with fellow members including Steven’s wife Julie, the lead vocalist who also plays the bodhran (Irish drum) and their son Ben, an accomplished fiddle, whistle and accordion player.

The rest of the line-up comprises Phil Harris (known as Filthy) who plays bass, banjo and mandolin; Russ Smith (known as Vicious) who plays bass and guitar, and Mark McLaughlin on drums and bagpipes.

The band was put together by Steven, whose Irish family moved to Lincolnshire from Glasgow when he was fifteen.

“My family moved down here to escape the debt collectors,” he recalls. “When we arrived I was a very mixed-up youth. I was a punk rocker and used to charge around with a Mohican, listening to The Exploited and New Model Army – music has always been a passion, which comes from my grandparents and my traditional upbringing.

“I’ve always been singing and writing lyrics and then I was introduced to a band called The Pogues – a punky Irish band, which has heavily influenced me, along with growing up surrounded by Irish music.

“I’ve been lucky with my singing and writing over the years; I’ve sold songs to Manchester United and Glasgow Rangers which were published by Cherry Red Records. I have recently been commissioned to pen a song for Liverpool FC and Glasgow Celtic.

“The instrumentals and the wording have been written, we’re just putting it all together. Our penny whistles and the banjos are perfect for the sound which they were after,” Steven explains.

When it came to forming the band, Steven recalls that he put a box advert in the local papers and then waited for the responses to come in.

“It’s strange,” he adds, “When I first heard from Phil he sounded very posh and I thought he wouldn’t do at all.

“He’s actually a barrister and travels to London every day for his job – but it’s great, as this is completely different for him. Russ is a transport manager and Mark a professional drummer, teaching music.

“So we all go off and do our own thing and then somehow manage to come together and commit to what is always a busy gigging schedule.

“We had our own show at The London Palladium in 2001 – which was something very special, but we’re equally at home playing to small audiences as well as bigger ones,” he adds.

It was this show which almost proved a major turning point for the group, when it was offered the chance to turn professional. However, with young families to consider Steven, Julie and their bandmates decided to turn the opportunity down.

“The band is very much a family thing – we’re husband and wife, and our son was just five when he started playing and twelve when he first performed publicly,” says Julie.

“When we got the offer, it would have meant going on the road and we wouldn’t have been home much. It was a really difficult decision to make.

“Twenty years later, though, we know it was the right one for us and what’s been nice, is that we’re all getting that bit older and we’re getting these chances to play festivals, and winning this latest vote has opened other doors for us.

“We made our sacrifices and we’re getting a second chance.”

Over the years, as well as releasing six albums, The Band From County Hell has played with groups including The Levellers, most recently The Beat and two tours with Stiff Little Fingers, appearing at events locally and as far afield as Europe, including beer festivals and theatres.

The name, which they are often questioned about, is a nod to their Lincolnshire roots and relates to how the county was known during the reign of King John, when much of it was treacherous marshland.

As for the future, as well as December’s big event at Skegness on the horizon, the band is also anticipating the release of its seventh album next August.

“My songs are inspired by all sorts of things – whatever’s going on around me. A lot of this new album is about me finding my real father two years ago, which was a very emotional time,” says Steven.

“So a lot of the songs relate to my upbringing and where I come from, while others touch on the state of things, different people around us and living in Lincolnshire.

“It’s a beautiful place to live – so grand and vast. The people take a long time to accept you, and get to know you, but I love this place. There’s a real beauty in it.”

To find out more about Band From County Hell visit www.bfch.co.uk

The band is playing The Guildhall Theatre, Grantham on Saturday 20th February 2016 and Lincoln Drill Hall, on Friday 18th March 2016.