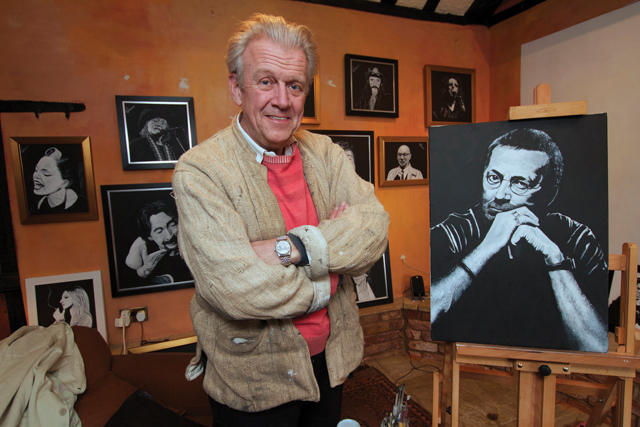 Following the beat of a different drum

In a 50-year career, Gilson Lavis has provided the beat for some of the biggest names in popular music: from Chuck Berry to Dusty Springfield, with chart-topping band Squeeze and for the past two decades with national treasure Jools Holland. His drumming still makes him happy, but the discovery five years ago that he could paint has taken that happiness to a different level.
His portraits capture music stars he admires, many of whom he has worked with, and they include the most striking impressions of Lulu, Lily Allen, the Rolling Stones and Dionne Warwick.

But the story of how he learned to paint starts with his addiction to drink. More precisely, how to kick it, and a decision to move to Lincolnshire after Squeeze had let him go for the second time in his career.

As a fifteen-year-old Gilson left his Luton home to join a Scottish rock band. Homesickness cut the adventure short but it wasn’t long before he was working as a jobbing drummer in clubs or on the road with headline acts where a pattern of drinking began.

“I got a job at the Talk of the Town in London playing for guest stars – people like Lulu, Tommy Cooper, Bob Monkhouse and even David Frost. And then I was what they called a pick-up drummer for American artists who came over here and toured.”

Essentially it involved replacing a star’s regular drummer unable to get the necessary paperwork to perform in the UK, and from here Gilson found himself touring with Chuck Berry, Jerry Lee Lewis and Tammy Wynette.

Fame came in the late 1970s after joining London band Squeeze, who were fronted by the brilliant songwriting partnership of Chris Difford and Glenn Tilbrook and featured a young Jools Holland on keyboards. They sang ‘Cool for Cats’ and ‘Up the Junction’ on Top of the Pops, they headlined at New York’s Madison Square Gardens… and then it all crumbled.

“We had that first wave of hits and I got really poorly with drinking. I was not really employable,” Gilson, now sixty-four, admits, “and the band broke up. Not really my fault; it was a volatile band – Chris and Glenn had always been very volatile.”

Gilson controlled the drinking, stopped the drumming and took to driving a cab. “I became a minicab driver and, during that time (around 1985) Squeeze reformed and went on the road for about eight years. But stupidly I picked up the drink again and moved up here to Lincolnshire.

“I’d been kicked out of Squeeze for the second time and I had no money, so I bought this derelict cottage twenty years ago.”

It was Gilson’s lowest ebb, he says, though the renovation work gave him a focus while he learned to quit drinking for good.

“Then Julian called me after I had been up here for about a year asking me if I wanted to do some shows as a duo. I didn’t want to go at first, I didn’t know if I could be in the music business and stay sober.

“Still, off we went doing charity work and little arts clubs and I never really wanted to do it full-time but I have trouble saying no to people, and then one day we suddenly had a bass player and a guitarist as well.”

The Jools Holland Rhythm and Blues Orchestra is now twenty-strong and plays live to 300,000 people a year. Taking a break from the band five years ago led Gilson to think about art.

“This particular trip there was a lot of nasty work going on,” he says, pointing at his face. “I had rented this place off the internet that I thought looked good but when I got there it was a hovel, so I had this dismal week in Budapest, alone and isolated and in a lot of discomfort from the dental work I was having done.

“The only entertainment was a television with one channel – in Hungarian of course – but what I did have was some paper and a pen.”

Those first sketches in felt tip – of the tour manager from the band, and another of his wife Nicky, who took some persuading that her husband had done it – convinced him he might be on to something. Gilson had shown artistic promise at school, in fact his teacher had suggested he should go to art school but the talent had remained untapped for more than forty years.

Now he’d got the bug, he couldn’t stop. “Being a compulsive person, I couldn’t stop doing sketches of people. I had found this new outlet for creativity. It was like this door opening and seeing this fantastic vista for the first time. I would sit here and sketch night after night.”

Using felt tip was a steep learning curve, he says (you can’t make a mistake with felt tip). Now, from initial pencil sketches, he specialises in black and white acrylic portraits in a way that is “hopefully quite dynamic. The strokes need to be quite firm. It’s easier with paints because if you go wrong, you go over it.”

Depending on its complexity, each painting can take anything from three days to a week to complete. Some of the stars Gilson has painted like Mel C, Ronnie Wood and Marc Almond have signed the finished work. Among his other subjects are Paul McCartney, Eric Clapton, Smokey Robinson, Mick Hucknall and Kylie Minogue.

Gilson confirms that some have been sold to the artists themselves but adds, surprisingly, that the only reason he started selling any of them in the first place was that he had too many.

His work has been warmly received in exhibitions in Dorset and is showcased at the Lincolnshire Gallery in Spalding. So is the art something that will nudge him to hang up his drumsticks?

“I’m a bit long in the tooth for the drumming,” he says, adding that the job has physically taken its toll.

“Fifty years of drumming and driving, and my spine is starting to collapse. I used to be 6ft tall and now I am 5ft 9ins, and that’s down to not working my spine as I should have.”

Gilson still drives himself to every gig, and anyone familiar with Jools Holland will know his band is one of the busiest on the circuit, with fifty dates already scheduled between now and the end of the year.

“I’m sixty-four so I have probably peaked now as a drummer,” he smiles. “The motivation of being a pop star or even being rich has gone, so now it’s seeing people enjoy themselves at shows but yes, I really enjoy my art. I still put my all into every show – doing less than that and you are cheating yourself and the audience but when I’m painting I’m truly at peace.”

For details on Gilson Lavis’s paintings, visit www.lincolnshiregallery.com or go to www.joolsholland.com for tour dates.