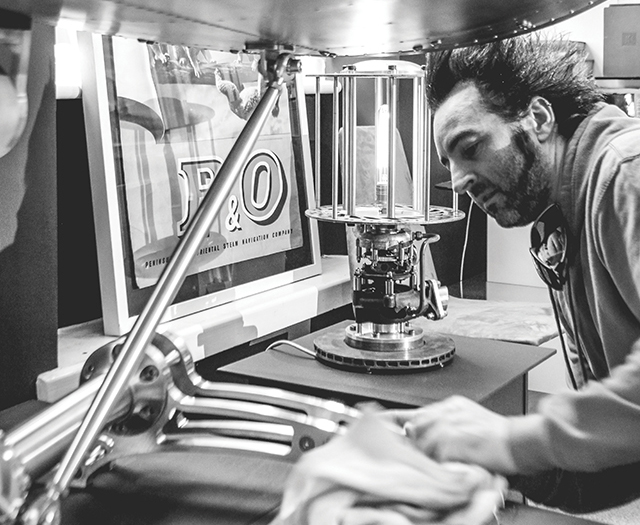 Fusion of old and new

“If I want something, I make it” – that’s the ethos of Lincolnshire engineer turned designer Mark Wilkinson, who tells Kate Chapman he is using his talents to transform items destined for the scrapheap into beautiful and functional homewares.

Mark is a firm believer that everything around us has the potential to be reused – from old car and motorcycle parts which he’s turned into stunning lamps, to an aeroplane wing which found a second lease of life as a desk.

And although he only officially launched his business Bear Industries a year ago, Mark’s work has already been showcased on prime-time television in the new series of Scrap Kings, currently showing on the Quest channel.

“There are lots of nice things I would like to have, but they are expensive, so my girlfriend Victoria and I have this saying ‘if you want it – you make it’ and that’s what we do,” says Mark, of Holbeach.

“I know I’m fortunate and lucky enough to have the facilities and the ability to be able to make these things, but it’s not just a case of sticking a lightbulb onto something, I apply my engineering skills to it and it’s great to see how the old and the new fuse and work together.

“I’m finding my work seems to trigger people’s intrigue, it makes them think about what it is and makes them question it, which I really like.”

Mark, who studied car design at Coventry University, had always been keen to start his own business repurposing items that would otherwise be thrown away.

He works as an engineer alongside his brother Rob, but for the past fifteen years has been collecting all sorts of items – or Wombling as he calls it – and making pieces as a hobby for himself, friends and family, as well as taking on the odd small commission.

“I just love making things, I always have since I was a child, and I’d always had the idea to do something like this and start my own business, but life just kept getting in the way,” says Mark.

“Then during a trip to the Cotswolds last year I got chatting to Caradoc Glaisyer, he’s the owner of Astley House Antiques, in Moreton in Marsh, and he really gave me the push I needed to finally go for it.

“I’ve always collected old stuff – I’ve even been known to go looking for bits and pieces in skips – and with some things I can instantly see what they can be transformed into, while others hang around for a while before the ideas start to come.

“That’s why our home is like a museum, it’s full of old bits and pieces – I’m just waiting for the inspiration to strike!”

Mark, who also plays saxophone in the 1960s band Sounds Force 5, was further encouraged in his work by his bandmate and friend Colin Ward, of Live Promotions, who after seeing some of the things he had made, contacted the producers of Scrap Kings to suggest he would be perfect for the show.

Before Mark knew it, he was signed up and was then filmed working on two different projects, which have been featured in separate episodes.

The first showed him transforming an old aeroplane wing into a desk, complete with a single leg made from the swing axle taken from a tank, which Mark says was designed to represent the plane’s landing gear.

This one-off piece is now for sale priced £11,500, while the second episode showed him working on a bespoke lamp, made from parts of an engine from an old Porsche 924, which he rescued from a neighbour after it had been flattened.

“I’m really grateful to Colin for opening the door to the TV show for me,” adds Mark.

“It was really good fun being filmed – we all had our GoPros strapped on as we went on location to the scrapyard, and then I was filmed at work in my workshop.

“It’s all helped towards raising the profile of my work and the main focus of what I do – reusing things that are destined for the scrapheap.

“I’m really keen to highlight the need to reuse and repurpose things to create beautiful items that hopefully people will love to have in their home.”

Other items that Mark has made include a stunning dovecote, which now takes pride of place in his own garden, garden sculptures, trivets and even a coffee table.

As well as selling them online via his own website, Mark has also attended events such as the Stoneleigh Car Show, with the hope of attending more next year.

He also has some items for sale at Astley House antiques, in Moreton in Marsh, and some of his lamps also for sale in Stratford-upon-Avon restaurant Caffeine & Machine.

“I just want to keep making things and hopefully get to the point where people come to me because they have a particular item of sentimental value, which although it’s useless as anything else apart from a doorstop, could be turned into something else that they cannot buy anywhere else,” says Mark.

“People want things that no-one else has – I like the idea of having something that nobody else does.

“I drive round in a rusty old truck – not many other people do that, but I like it. I feel it reflects me and my personality.

“And I like making things that are unique – I don’t want to be flooding the market with loads of items that are identical.

“With my pieces people know their neighbours aren’t going to have one, and if they do, it certainly won’t be the same.”

Watch Scrap Kings on Quest on Tuesdays at 9pm. To find out more about Mark and his work visit www.bear-industries.co.uk