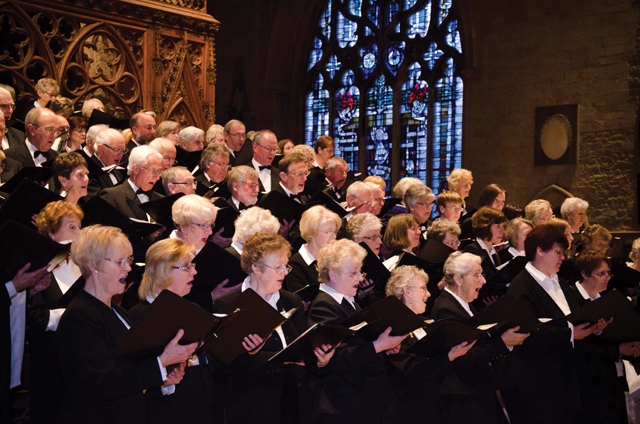 Half a century of singing

Grantham Choral Society celebrated their first half century in April with an afternoon performance of Handel’s Messiah at St Wulfram’s Church and there are plenty of reasons why their future looks bright too.
Prior to 1963 there had been a good variety of choral performances staged over many years, mainly performed by local church choirs; on occasion joining together with other local singers, and using professional soloists such as Isobel Baillie, Elsie Suddaby and Owen Brannigan. Most of these performances seem to have taken place at Christ Church, Finkin Street; at the time known as Finkin Street Methodist Church.

1963 saw the town celebrating its Quincentenary and as part of the year-long programme on 2nd February 1963 at St Wulfram’s Church, about seventy people who enjoyed singing, gathered under the baton of Philip Lank and the Leicester Symphony Orchestra to sing what was to be the embryo choral society’s first performance of ‘Messiah’ using local soloists. From all this the Grantham Music Society was born, changing its name in 1967 to Grantham Choral Society.

The society performs mainly religious works but has always performed other secular works along the way. This has increased in the last few years with ventures into opera and joint concerts with the Army and Royal Air Force. All this, along with the annual and very popular carol concerts, make up each season’s varied programme. Since that first concert, numbers have grown and the choir now boasts well over 100 members.

Over fifty years the society has only had four musical directors. From its inauguration Philip Lank directed the society for thirty two years, followed for the next six years by his cousin Kenneth Lank; Philip Robinson took over the baton in 2001 followed by Simon Bell in 2006 but Philip came back to help out for one year when Simon moved to Winchester. At the commencement of the fifty-first season in September, Nigel Stark will direct the society towards its second half century.

Nigel lives in Oakham and was most recently based in Leamington Spa for five years as the musical director of the Bach Choir and St Alfred’s Church. He is already very familiar with the county from his time as musical director of St Mary’s and St Martin’s, Stamford. Nigel trained as an organist and choir director but has a practical knowledge as an electronic engineer and piano restorer. He uses this in his business promoting specialist organs which apply computer technology to deliver the experience of playing instruments from around the world.

“I am honoured to have been appointed to work with Grantham Choral Society for the future,” explained Nigel. “With over 120 members the choir is already established, with a strong youth section and I hope that I can build this further. I want to make music attractive and capitalise on the resurgence of interest in singing which Gareth Malone and others have created.

“A choir can be another family to members, offering support and the feeling of wellbeing that singing in harmony can create. I want to welcome as many new members as possible.”

The challenges are not just musical but financial too. Nigel has set the new season’s programme and has to balance the expectations of the choir with those of the audience and the cost of soloists – not an easy task with funding cutbacks.

The choir rehearses on Tuesday evenings at The Priory Ruskin Academy, Rushcliffe Road, Grantham at 7.30pm and you can find out more information by calling the Honourable secretary on 01476 568319 or visit the website www.granthamchoralsociety.co.uk