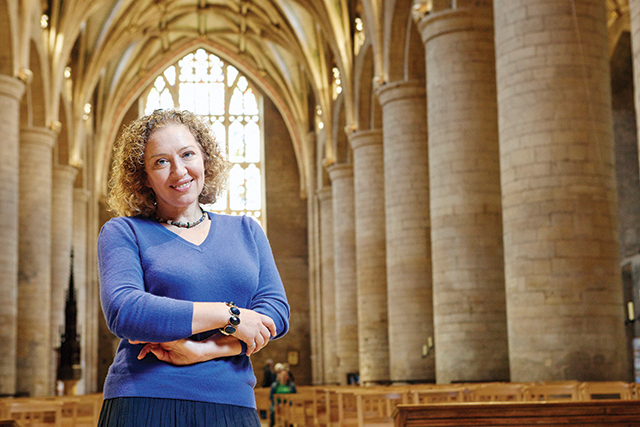 History at its heart

As Lincoln continues to mark more significant anniversaries connected with its medieval past, this year’s week-long Lincoln Book Festival (25th–30th September) is putting history at its heart.
The packed programme for 2017 will see some of the country’s best known historians, broadcasters and historical fiction writers visiting the city to discuss their particular passions. In addition, the festival promises a host of workshops, school activities and local tours, intended to bring an exciting breadth of historical drama to life and inspire all ages.

With a special emphasis on the Gothic, the festival will trace the enduring popularity of the period and its unique style, with readings and discussions covering everything from the architecture of George Gilbert Scott to the Victorians’ fascination with the supernatural.

Among the well-known names scheduled to appear are historians David Starkey and Alison Weir, and author Diane Setterfield. Special events will explore topics ranging from clashing factions in the medieval period, through Renaissance art to Victorian scandal. The festival is centred on The Collection Museum & Art Gallery, which will host many of the confirmed speakers. Other venues include the city’s Drill Hall theatre and its two universities.

Lincoln is the ideal setting for a festival that celebrates the riches of the past and the importance of the written word. The city boasts one of Europe’s finest Gothic cathedrals, a Norman castle and is the only place in the world where originals of the 1215 Magna Carta and 1217 Charter of the Forest can be seen side by side. These two crucial written documents are the basis for many of the legal traditions that continue in Britain to this day. And this year, with the special exhibition of Domesday Book, there has never been a better time to get a deeper sense of the significant events of previous eras and the magnificent changes that we have seen.

Lincoln Book Festival Trust chairman Phil Hamlyn Williams said: “This year is an exciting and important one for Lincoln and its heritage, and as the region’s premier literary festival dedicated to history writing and historical fiction, we hope we have compiled a programme that adds to the great mix of events available for local people and visitors.”

The festival will open on Monday 25th September at The Collection with a launch party highlighting the creative writing talent in local schools, in conjunction with the charity First Story. Winners of the first ever Lincoln Book Festival Flash Fiction Competition (for stories of just 50 words) will be announced and Lincolnshire based young adult fiction author Kerry Drewery will talk about her latest book, Day 7.

Mr Hamlyn Williams said: “We’ve been delighted at the response to our first ever flash fiction competition, which challenged budding authors to pen their own ultra-short stories in the Gothic genre, with well over 300 entries, including some wonderful submissions from local schools. We can’t wait to announce the winners at our festival launch party with the charity First Story.”

On Tuesday the focus shifts to the world of visual art and the muses who inspired some of the masterpieces of art, with Martin J Kemp – one of the world’s foremost experts on Leonardo da Vinci and the Mona Lisa – and Kirsty Stonell Walker, a renowned scholar of the pre-Raphaelites.

As Lincoln this year marks the 800th anniversary of the Battle of Lincoln and the sealing of the Charter of the Forest, historian David Starkey will discuss another decisive battle in the nation’s history, the Battle of Bosworth Field and the beginnings of the Tudor dynasty. He will present his talk ‘Arms and the Mind’ at Lincoln Drill Hall on the evening of Wednesday 27th September.

Diane Setterfield, author of the international bestseller The Thirteenth Tale, which was adapted into a major BBC drama in 2013, will explore Gothic fiction and talk about her second novel, Bellman & Black, in a special event at The Collection on Thursday 28th September. On the same evening, award-winning historian and biographer Kathryn Hughes, author of Victorians Undone, will discuss tales of the flesh in nineteenth-century England.

On Friday 29th September, the same venue will pay host to Alison Weir, Britain’s biggest-selling female historian, who will be in conversation with writer Sarah Gristwood on the theme of queenship and the exercise of power by female rulers from the Norman Conquest to the Reformation. Then Oxford academic and TV presenter Janina Ramirez uncovers the secret lives of Anglo-Saxon saints.

This year’s festival invites visitors to ‘Go Gothic’, by celebrating the Gothic in all its glory. The novels of the Brontë sisters and Mary Shelley in particular continue to inspire and excite readers of all ages today with their wonderful mix of mystery, horror, fantasy and romance. The influence of the genre can be seen in recent hits including the Twilight series and in Steampunk, a ‘retrofuturistic’ style that has inspired a popular festival in Lincoln.

Mr Hamlyn Williams said: “This year’s Gothic theme takes its inspiration from Lincoln’s medieval past and of course its iconic architecture and with such an eclectic range of subjects, there should be something for audiences of all ages and interests to enjoy.”

Academics from the University of Lincoln and Bishop Grosseteste University will jointly hold a Gothic literature masterclass for school and college students, reading classics of the genre on Wednesday 27th September. Another, free workshop for budding writers of Romantic fiction is also planned for the festival, with Mills & Boon authors Janice Preston and Jenni Fletcher visiting The Collection on Friday 29th September.

Also in keeping with the ‘Go Gothic’ theme, this year’s festival will close with a talk and tour exploring Gothic revivalist architecture of the Victorian period and the buildings of Sir George Gilbert Scott, including a guided visit to St Nicholas Church on Newport, Lincoln – the first church Scott ever designed.

There will also be a free morning of local history at The Collection on the final day of the festival, featuring talks on topics as varied as the theatre scene in Georgian Lincolnshire and the ironstone mines of the Lincolnshire Wolds.

Tickets for Lincoln Book Festival events can be booked via the Lincoln Drill Hall Box Office in person, on 01522 873894 (Monday to Saturday, 10am–5pm) or online at www.lincolndrillhall.com. Tickets for most author events are priced £10 (NB: the David Starkey event is £16). For more information on the Festival and the 2017 programme, visit: www.lincolnbookfestival.org and follow the festival on social media channels.