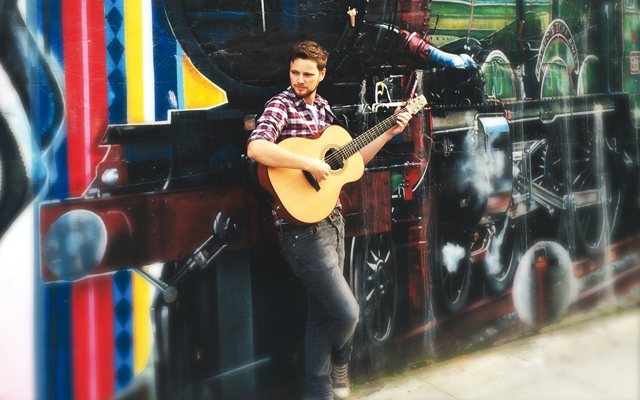 It was always music for Elliott Morris

Passionate about music since he was a small child, singer-songwriter Elliott Morris is certainly hitting all the right notes and developing quite a fanbase for his unorthodox acoustic-percussive style and unique blend of folk, roots, rock and pop.
Born in Swindon, but raised in Wales and Lincolnshire, the twenty-five-year-old always wanted to play the guitar and is now living out his dream – currently supporting Paul Carrack, of Squeeze and Mike and the Mechanics fame, on a thirty-date national theatre tour, as well as playing his own gigs and releasing several EPs all to critical acclaim.

In 2013 Acoustic magazine described him as the ‘next big thing’; he’s played several BBC Introducing slots and has taken his music across the British Isles, along with a short headline tour of Germany and Holland in 2014, with more plans to play in Europe this year.

“I had no real back-up plan – it was always music,” says Elliott, who describes his style as a combination of folk, roots, rock and pop.

“I always wanted to play the guitar, since I was really little. I think it stems from watching the Beatles films like A Hard Day’s Night – I just thought they were incredibly cool!

“They won’t mind me saying, but my parents are musically talentless and cannot play a note on anything, but me and my brother were brought up on Dylan, The Band and the Beatles – all the good stuff.

“I was told I wasn’t allowed to play guitar until I’d passed my Grade One piano. I was a terrible piano player but I managed to scrape through and then I got the opportunity to start electric guitar lessons when I was in Year 8. I moved on to acoustic when I was about seventeen.

“My mum and dad are incredibly supportive. I’m sure many parents don’t want to hear that their child is going out on the road, but mine were, and still are, really supportive. I started gigging really just for fun. I wanted to play my music, so tried some songs out at a few acoustic nights, I got a positive response and I was asked back and before I knew it, I was doing it full time!” he explains.

Elliott, who studied at Horncastle’s Banovallum School, cites his electric guitar teacher Andy Taylor, from Sleaford, as a massive influence on his career. It was Taylor who introduced Elliott to the work of Irish player Eric Roche, who has also heavily influenced his playing style.

“Andy showed me one of Eric’s DVDs and said why don’t we try and work on some of this stuff? It was all very exciting, new and fresh,” recalls Elliott.

“I started writing my own songs, this was while I was still doing my A Levels, and then I started playing acoustically and gigging. The Lincoln student music scene was really vibrant – sometimes I would play five nights a week, and that’s where I cut my teeth. As those nights disappeared when the recession hit, I had to go further afield to find gigs.”

Elliott is influenced to write by everything around him, from people and places to everyday objects, and he enjoys arranging both traditional and contemporary songs.

“I play the guitar with a lot of altered tunings – tuning strings to different notes rather than ‘standard tuning’ – and I use a few percussive elements too, hitting the body of the guitar and tapping the strings.

“Jimi Hendrix was a great player because of the songs he wrote. Whenever he comes on the radio you sing along with him – that’s what makes him memorable. There are loads of guitar players who will never be recognised because they are just playing the same notes as everyone else. It’s about putting your own stamp on it. The song is what’s most important.

“Everyday things influence me – I can see something written down or I walk down the street and see something. For me it’s about everyday objects and finding a new way to write about them. Travel influences me too; I do a lot of travelling round when I’m on tour and often see and hear things that lead me to new ideas.”

Elliott’s versatile blend of different styles has led to him supporting a range of major artists including Andy McKee, Lau, Seth Lakeman and even Madness. He’s also been joined a number of times onstage by Ed Sheeran, Alan Thomson (from The John Martyn Band), Mike Vass and Innes Watson.

Supporting Paul Carrack recently has taken him onto the stage at the London Palladium, while other events last year included the Cambridge Folk Festival, the London Acoustic Guitar Show and Celtic Connections.

Thanks to a string of solo EPs, Elliott’s work has also gained considerable airplay. His latest offering, It Seemed to Make Sense at the Time, was released at the start of last year and is available to download via his website, while CD copies can be ordered through the post and are also on sale at his concerts.

“I’ve released a few EPs now; it’s a case of locking myself and my brother Bevan – he’s a wonderful double bass player, producer and percussionist – away and working until it’s done,” Elliott explains.

“I can’t just lock myself away for six months and say I’d like to write and arrange a record – as I have to be out gigging – that’s my job. So I like EPs – they are a snapshot of where you are at that point and you can release one every few months, rather than every couple of years. They take less time than an album and you can fit recording sessions around shows. I think it makes you progress quite quickly. My latest one was mainly recorded in Lincolnshire with a few on location.”

As for the future, Elliott hopes to just continue what he’s doing and take his music to more people, with a few gigs in Europe coming up too.

“Supporting Paul, I’ve been playing bigger shows than my normal size. But I love playing to ten people, to 100 or 1,000 – it isn’t the size of the show, it’s really what you make of it. Some of the most enjoyable shows I’ve played have been the more intimate ones.

It’s much more nerve-racking when you can see the whites of people’s eyes – but it makes you play better and feels much more rewarding at the end of it all.

“For me it’s about the travelling, writing and playing my own music. If people hear something that they enjoy and keep coming back to see me, then that’s great.”

* For more information about Elliott and his music, visit www.elliottmorris.co.uk