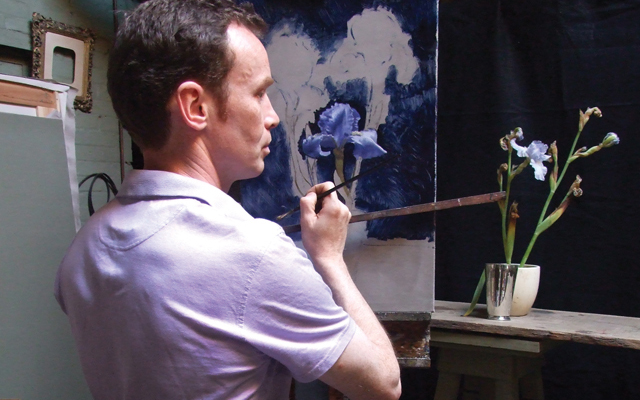 My great-uncle had a dimly lit workshop in one of his barns. The sign on the door read, ‘This is the place where miracles are performed but the impossible takes a little longer’. James Gillick’s studio doesn’t have a sign on the door, or any windows for that matter, but a notice in a distinct calligraphy does warn you that the parking is private.

James heard me arrive and welcomed me at the door with a broad smile and outstretched hand. It was still instantly recognisable to me though. The unexpected blindness until my eyes became accustomed to the light, the smell of linseed oil and the at first glance, higgledy piggledy arrangement of tools, wood, canvasses, frames and paints. In the centre of the room, naturally lit from a roof light, was an easel and a painting in progress of irises.

Of course, there is nothing random at all to this layout. I perched on a stool while the contents of the numerous cupboards, drawers, benches and racks were explained to me in an anticlockwise tour around the room. Over the last three years James has been developing his own atelier and this is a craftsman’s workshop where he and his assistant, Lee, are joined by students who request to come to learn from his artistry and skill.

Each area is dedicated to one particular craft or material required to produce his paintings; making the panels, stretching and lacquering the linen to produce smooth, rough or semi-rough finishes; jars of pigments and oils; reference books and a drawing library; carpentry tools, boxes of brushes and artists’ palettes – and of course the focus of the room – the easel.

James has an impressive artistic pedigree. His family have been involved professionally in the arts for three generations. Ernest Gillick (1874-1951) created the figures on the façade of the Victoria and Albert Museum and Mary Gillick (1881- 1965) was a relief sculptor, responsible for the portrait and design of pre-decimal coinage. One of ten children, born and raised in Norfolk, James could not only look to his immediate family but also to his extended family for inspiration and guidance. Both his parents are artists and ran a small art school; his twin brother, Theodore, is a celebrated sculptor and other members of the family work as architects, designers, dancers and illustrators.

Despite being opposite a busy junior school and in the centre of the bustling town, James’s studio is calm and tranquil. I asked James where he had trained. “I suppose I have been training all my life,” he explained. “Art was always predominant in our home and I had my first commissions while I was still at school. These were for portraits or pictures of horses or dogs.”

He took what he called a ‘fail safe’ degree in Landscape Architecture but in his early twenties spent two years studying to improve his fine art skills. I asked how he had settled on oils as his chosen medium.

“It is the vibrancy and definition that you can achieve, but also I wanted to make pictures which would last. I craft them to have value for hundreds of years.” While many of his works are still lifes, James paints portraits, horses and nudes, many of them by commission but the one thing they all have in common is that they are the antithesis of the short term, disposable, fast pace of some art and modern life.

The working year for James is split into three parts. December is used for study time and from January to May he works on still lifes and some commissions. June to November is reserved for working only on commissions. In a year, between twenty and twenty-two pictures are completed. Exhibitions and shows have to be fitted in between and James is also writing a book. It is designed to be an entry level guide for people who like paintings but find they have not got the vocabulary or phraseology to express what they see. It has been prompted by his observations and conversations with some of the students who come to visit the studio.

I wanted to know how James chooses what he is going to paint.

“I look for beauty in simplicity”, he explained. “I look for objects that have little or no pattern, a simple form and a certain noble dignity about them.” He showed me a picture of a single snowdrop stem in a glass decanter that has all the hallmarks of his work; the quiet light, the sharp contrast of foreground and background, the simple form of the vessel and the skilled study of nature in the flower. It is one of the paintings that will be included in his forthcoming exhibition at the Jonathan Cooper Park Walk Gallery, London this month.

Since his first exhibition in 1995, James has built a growing reputation amongst clients who recognise the quality of his work and patrons who wish to invest in art for their homes. “People commission pictures for a variety of reasons,” he continued, “as a love token; as a reconciliation gift; as an heirloom or historical record for the next generation. My pictures are an investment in the longevity of the people and families who buy them and art needs this patronage.”

James feels that his pictures appeal to certain people. They certainly are suited to hanging in period, stone-built homes but he has seen them work equally well, juxtaposed against minimal modern interiors.

“All my pictures have this stillness, even my portraits, which I suppose is the hallmark of my work. Children are easier to paint because they have a simplicity about them and I find it in horses too. I sit in their stables for a week and make reference drawings which I will use along with photographs before I begin to paint.”

The first layer of paint is laid down to give the outline and scale of the painting. The second and third is the detail of form, shadow and colour. Atmospheric and barometric conditions make a big difference to the amount of time a painting takes to dry but a first layer of varnish is applied after initial drying. A second layer will be applied a year later, often when the painting is in situ in a patron’s home.

Each painting represents approximately three weeks work and originals are authenticated on the back with a plaque and vellum signed certificate. One of the ways Rennaissance artists broadened their availability of work was to produce reprise versions and James produces four of these for each of his exhibition pieces. Priced thirty per cent less than the originals, they have opened a new clientele for his work.

It is June. The culmination of the still life season fast approaches: exhibitions at the Chelsea Flower Show and at Jonathan Cooper’s the following week. James and his team are still caught up in all the hectic preparations: catalogues waiting to be mailed and a show stand to be built. The subject of his first commission of the summer, a beautiful 500 year old, Spanish, copper-lustre vase and its roses will have to wait.