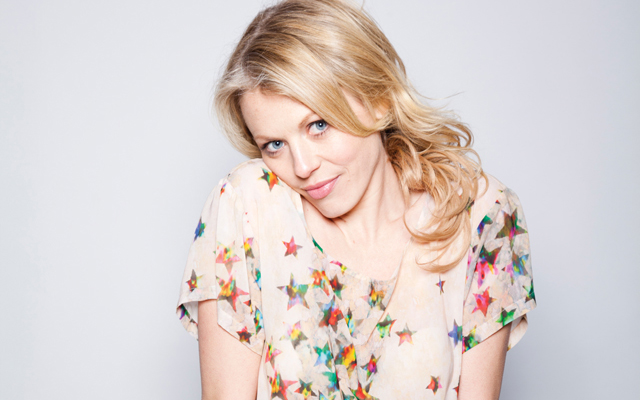 Kelly’s script for a life on the stage

Determined that acting was the only career for her, Lincoln-born Kelly Adams is fast becoming a household name as a star of both stage and screen.
Since graduating from drama school the thirty-four year old has appeared in some of the nation’s favourite shows including Holby City, Hustle, Death in Paradise and Endeavour.

Recently gracing our screens as Padre Mary Greenstock in BBC3’s Bluestone 42 – a comedy drama following the lives of a bomb disposal detachment serving in Afghanistan – Kelly has also appeared on stage this year at the Menier Chocolate Factory in London, in a production of the farce Two Into One.

Kelly grew up in Waddington, where she attended North Kesteven Secondary School. Bitten by the acting bug at an early age, Kelly admits she never considered an alternative career should things not work out.

“My mum used to take us to the theatre in London once a year and it was my highlight. As a child I didn’t understand that acting was a real job that you could do!” said Kelly.

“My school had an after school drama club, and there were singing and dance lessons – I did everything I could to immerse myself in it.

“Acting was all I wanted to do from about the age of twelve. The careers advisors at school asked me if I had any back-up plan, but there never was. As I got older I got into amateur dramatics at the Theatre Royal in Lincoln – I even did my work experience there.

“Everything was geared towards going to drama school in London. I went every few weekends to audition. It was really quite stressful trying to get in – those people held the rest of my life in their hands!”

With the support of her family, and in particular her mother, Kelly secured a place at Mountview Academy of Theatre Arts, in North London, whose alumni include Glynis Barber, Downton Abbey actor Brendan Coyle and Amanda Holden.

Roles in Casualty, Doctors and the film Bronson followed, but her big break came in 2004 when she won the part of Mickie Hendrie in Holby City.

As if the whole process wasn’t nerve-wracking enough, Kelly explained it was also the subject of a BBC documentary – Making it in Holby – which charted the seven weeks of auditions and workshops she took part in before landing the role.

“I did some commercials first and hadn’t done any TV before. I remember arriving on set for the first time and I didn’t have a clue; I didn’t know where to stand or about continuity or anything like that,” she said. “But what I want to do has definitely changed since I started out.

“I used to think I wanted to win an Oscar, but I’ve got more excited about British television and I’m so proud of Bluestone 42. Awards don’t matter to me now; it’s the work that counts.

“It’s taken a few years to get into comedy a bit more – there aren’t many female roles. For some reason people don’t seem to like women in comedy. But I love it.”

As well as working in front of the camera Kelly has also started writing her own material, which has already been picked up by Channel 4. Although she can’t reveal too much about the project yet, she’s certainly having plenty of fun trying her hand at something new.

“I’m thirty-four, I’ve been on the LA casting scene, it’s very stressful – you have to really not care about what people say. I’ve got a thick skin, but I’d rather write something fun and have fun working with great actors and directors.

“I remember talking to Tom Hardy (Kelly’s Bronson co-star) and mentioned the lack of female roles for women aged forty, fifty, sixty and he just said why didn’t I write something of my own?

“I wanted other people to write it for me to act in and he basically told me to get over myself and start writing and that’s what I’ve done, and it’s been absolutely brilliant.

“It’s a very slow process, and difficult, but it’s something I can do in-between the auditions and the voiceover work to keep my brain working. It’s an eye-opener to see how the other side of storytelling works.”

Although it came to an end in 2012, Kelly is probably best known for her part in the long-running BBC1 drama series Hustle. She joined the cast in 2009, for the fifth season, playing Emma Kennedy, a new member of Mickey Brick’s crew of con artists.

“I was on Hustle for four years and it was fantastic to work on. It was good fun, even though I was the only woman. I’d get dressed up in all the beautiful clothes and high heels and then I went straight onto Bluestone – being in an army uniform, which is fantastically warm and comfortable!” she said.

Although Bluestone 42 has been commissioned for a third series Kelly is not sure if she will be involved. She is currently auditioning for several projects and is hoping to work in the forthcoming musical version of Made in Dagenham, also tipped to star Gemma Arterton.

When she’s not at work Kelly unwinds by running, cycling and swimming, taking part in duathlons and triathlons with her husband, fashion photographer Chris Kennedy. She’s also completed the London Marathon.

Since she has no family in Lincolnshire anymore Kelly doesn’t come back to visit her childhood home, but she remains fiercely proud of her roots and was thrilled when the writers on Bluestone 42 decided to make her character hail from the county too.

“There’s all sorts of references to Skegness in the show, and they put up a picture of Lincoln Cathedral, which was great. I was only thinking the other day how much I miss the cathedral view, and going to Stokes for cakes and tea.

“Me and my sister grew up in Waddington, we used to go horse riding all the time, and it really was an idyllic childhood. I’m incredibly proud to be from Lincoln.”