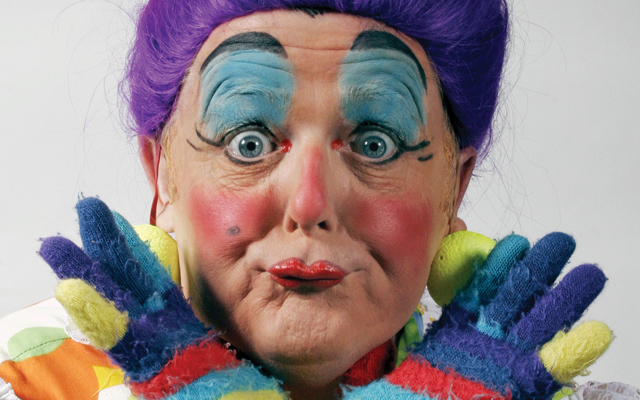 Steve Barclay could not be more delighted to be back at Lincoln’s Theatre Royal in this year’s pantomime, ‘Dick Whittington’
Steve moved to Lincoln about twenty years ago and is thrilled to be at home for Christmas once again.

“I have travelled from theatre to theatre all my life and I am quite used to summer seasons and pantomime seasons away,” he said. “I am used to doing tours which take you from Truro to Inverness and back and that’s okay but believe me, there is really no place like home so I am really thrilled to be appearing in Lincoln with Tommy and Bobby again this year, especially since it really is my favourite theatre.”

That is quite a tribute from the man who has played all the best theatres in the land, including the London Palladium more than once.

“The Theatre Royal is something very special. Most people like to appear on that stage because it has space, it has tradition but it also has the most important thing of all: audience contact. You are really close to the audience and it makes for such a great atmosphere. When the place is packed with families who have come to see the panto, life just doesn’t get any better.”

Steve was a child star who started off by amusing his family with his impersonations of the stars of the day. His reputation grew and several talent shows later he found himself getting bookings at charity shows and then clubs.

“I had a job but I didn’t really like it. I spent most of the day thinking up gags and trying out new impersonations. The guys I worked with loved it but the boss wasn’t too happy. Fortunately I started getting more and more bookings, so I was able to leave before I got the sack,” he said.

“To be honest I think I was a bit stage struck. I just loved show business and I loved seeing the big stars. Little did I know at the start that one day I would work with many of them and become pals with a lot of them too. They were all very inspiring to me. George Formby inspired me to learn to play the ukelele and I’ve got pretty hot fingers now. Ken Dodd was always very encouraging and watching him is a great lesson in involving your audience. Danny La Rue was real show business and brilliant with timing. Norman Wisdom was an amazing all round talent. That’s what entertainment is all about. All the great stars reached the top with sheer talent and that is why they became legends of show business.”

Steve moved to Lincoln simply because he liked the city. Well that’s part of the story. He also met his future wife on a cruise and she came from Lincoln, so he more than liked the place!

“It wasn’t a business move or anything like that,” he explained. “I don’t see how anyone can come to Lincoln and not like the place. It has everything you could possibly want – great shops, great history, lots to do, all the ingredients of a vibrant city, but minutes away from the countryside and not far from the coast. Lincoln is just great and with the road system improved, I can get anywhere in the country and not be home too late from the theatre.”

“I was Widow Twankey and we had a lot of fun,” he said. “Tommy and Bobby are great to work with, real pros, and they have taken a great liking to Lincoln audiences. I shall be Dame again this year and I always make new frocks and props for each panto.

“It doesn’t bother me playing Dame because the character is always just a clown in a frock and I like clowning. My stage act is comedy, music and impersonations and as Dame I get to do all of that. I get some great lines too. My daughter comes to see the show but she has never asked why Daddy is wearing a frock; she just knows that Daddy will do most things for a laugh.

“I do believe in family entertainment and I would never appear in something I wouldn’t want my daughter to see. That’s the great thing about panto; it is a great British institution for all ages and I love it.”

Tickets have already been going well for ‘Dick Whittington’ which gives entertainers a great lift even before they come out of the dressing room.

“I’ve been there in theatres when half a dozen people are in the audience and two of them are reading the paper,” said Steve, with a smile. “That’s part of being in show business. We have all been there. That’s what makes it great when you turn up at the theatre, ask how the tickets are going and they tell you it is a sell out. You are walking on air for the rest of the day and all the way through the show.

“Lincoln people love their theatre and they love their panto so I have been excited about it ever since it was agreed that I would return this year. The rehearsals can be quite hard work but once the music starts for real and you step out on the stage the rest is sheer magic and you never want it to end.

“Sometimes the noise from the audience is so huge you can’t hear yourself think and all the cast really love that, so all of you who are coming to see ‘Dick Whittington’ give me a shout and a wave. Shout out Lincolnshire Life and I’ll know you have been reading this great magazine. Oh yes I will!”