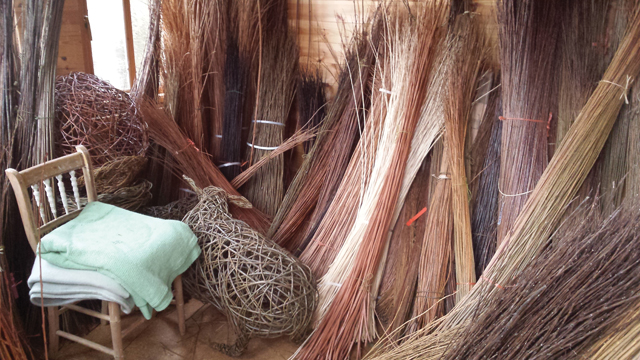 The first thing that strikes you is the smell. There is an unusual but pleasant aroma filling the air and the sheep in the middle of the room is not the culprit.
I have come to meet willow weaver, basket maker and artist, Alison Walling in her Lincoln studio and the smell of the massed ranks of willow rods leaning lazily against the wall is instantly recognisable. “The sheep is a commission that I have just finished,” explained Alison, and the subtle drop of the shoulder and angle of the ears are uncannily lifelike.

Alison is a passionate advocate of willow, both as a practical working material and as a sculptural medium, and she has agreed to tell me a little about her work as well as some of the heritage of willow growing in Lincolnshire. We start by heading up the A15 towards Snitterby and to a field where she grows some of her own.

“Right up until the mid-twentieth century, Lincolnshire and Nottinghamshire were internationally renowned for the quality of their willow and willow products, with huge ‘withy’ beds that provided material for a thriving industry,” said Alison.

A Rural Industries Survey in 1926 stated ‘the valley of the Trent and its tributaries is the most important district in England, both for osier (willow) growing and basket making, not only for quality of output, but also quality of rods, and care given to their cultivation, and for the fineness of the basketry done there.’ (from Rodney Cousins – A Basketful)

The industry in fact had a major presence throughout the county, from Stamford in the south to Gainsborough in the North and spanned several centuries. The damp, fertile conditions, favoured by willow and common in Lincolnshire, are something which seventeenth-century poet, John Taylor recognised:

‘Near the Garrick milestone (in the parish of Heckington)
Nothing there grew beneath the sky
But willows scarcely 6’ high
Or Osiers barely 3’ dry,
And there of only one years crop
The flood did fairly overtop’

Rows of young willow stretch across Alison’s field and she has come prepared to harvest and plant.

She said: “When I first started working with willow I began to appreciate this fascinating local heritage that had completely died out in Lincolnshire, so I started to research varieties that would have been traditionally grown in the area.”

She now grows more than a dozen varieties, some of which, like ‘Lincolnshire Dutch’, bear names that indicate their local origins. Another species, Salix harrisoniana, is named after Harrisons, a company based in Grantham from 1701 until 1965 and one of the country’s largest willow growers and manufacturers.

As we bent to cut the rods Alison explained: “Winter is the time that the willow is harvested, before the buds break in spring, and it is also the time when you plant out new ‘sets’, finger thick sections of willow about 60cm long that are simply pushed halfway into the ground. These root quickly and will be producing their own rods within a couple of years.”

Large-scale willow producers during the industry’s heyday would have harvested as many as 2 million rods from a ten-acre field, all by hand. After just an hour of cutting in the warm February sunshine, it is clear what back-breaking work that would have been. The satisfaction, for us at least, comes from the neat, whippy bundles of willow in colours ranging from red, orange and brown to green and black.

Back at the studio the newly harvested willow will be stored outside until it is either used or is processed by stripping, or peeling, off the bark.

“The bark is usually left on willow that is destined for outdoor use, such as hurdles or garden sculptures, while stripped willow is often used for finer basket work,” explained Alison. ”Stripping willow was traditionally undertaken by women and children before the task became mechanised in the 1920s and ’30s, although it is a skill that craftspeople still sometimes do by hand today and is an activity that was romanticised in the ‘Strip the Willow’ folk dance that many people are familiar with today.”

Bundles of willow fill the studio, standing upright and closely packed with many reaching the ceiling.

Alison said: “Willow has always been sold by the ‘bolt’ with the rods sorted by size and colour after they have been stripped and then dried. Traditionally they were graded mostly by length but nowadays it is generally done by weight, which is quicker.”

Alison hopes one day to grow all the willow she needs but for now demand for commissions and workshops outstrips supply, so she must source material from further afield, and mainly Somerset.

Before this current phase of her career, Alison was an artist and teacher working with a variety of materials.

“I have always been a gardener and plant lover and it was in 1998 that I first had the opportunity to work with willow. I volunteered to take part in an artsNK project at the Nettles, near Sleaford creating artwork from willow and other natural materials in an outdoor art space,” she said.

Fifteen years on and the Nettles project is ongoing, now boasting some of the most impressive living willow structures in the country, while Alison, having become a member of the Basket Makers Association and a qualified trainer and assessor, is working full-time running workshops and taking on both private and public commissions.

She said: “First and foremost I am an artist and specialise in the random weave technique that is free flowing and creative and therefore suitable for making sculptural shapes. But as a basket maker I also understand and appreciate the technical skill required for that craft.”

In the Lincolnshire Archives collection, an apprenticeship agreement dating from 1735 details the eight years of training, from the age of thirteen to twenty-one, that young basket makers were required to undertake.

“The basket making industry was highly regulated and workers produced very precise products following set recipes, for which they were paid set rates determined by a national body,” explained Alison.

Imported willow and new materials for making furniture and containers, such as cane, slowly led to the demise of the industry in Lincolnshire in the mid-1900s and today there is little evidence of it remaining. In recent years, however, large-scale willow production has returned to the county, but this time for an entirely different purpose: as fuel for power stations.

The old craft skills, though, have been kept alive by a few craftspeople like Alison. “I was recently commissioned by the niece of a basket maker who worked in Brant Broughton in the 1930s. She wanted me to repair one of his old baskets, which gave me an incredibly satisfying sense of connection with the past. Not only that but I was able to experience in detail and learn from his technique.”

Deftly twisting and shaping some willow, Alison demonstrates the techniques she uses. “Whilst basketry is definitely a skill which can take a lifetime to master, it is still possible for beginners to make a simple basket,” she said, ”while for people who prefer a less technical, more free flowing challenge, random weave willow work is a creative activity that can quickly achieve satisfying results.”

Children, too, seem to love working with willow and Alison recently worked with North Somercotes Primary School, near the Donna Nook seal colony, to create a three-metre-long grey seal sculpture.

To see what can ultimately be achieved you need look no further than some of Alison’s commissions, many of which have been on public display around the county. The eye-catching four-metre-tall Lincoln Imp, displayed outside the cathedral in 2011 as part of the Cultural Olympiad, and the badgers, deer, hare and fox that formed part of the Enchanted Forest at Doddington Hall in 2012 are just a couple of examples. Further afield she undertook a lifesize ‘willow man’ that formed part of a show garden at the Hampton Court Flower Show in 2010. Asked to summarise her thoughts, Alison said: “The great thing about willow is that it is so versatile and allows you to create art with a sustainable material.”