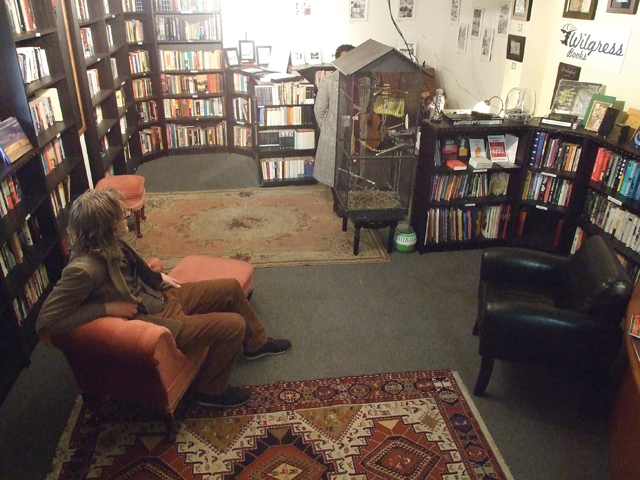 Making an investment in words

At a time when you might think it more economically sound to invest in magic beans than set up a new and used bookshop in the city of Lincoln, Guy Wilgress is intent on bucking recent trends, offering not only an alternative place to buy interesting books but also a space for poetry readings and other live events.
I sat down to talk with Guy, the owner of Wilgress Independent Books, a few days after a spoken word night to which I contributed. I wanted to find out how and why he had embarked on the venture.

Part of the reason, he told me, is down to responsibility: “When I was at university, here in Lincoln, I attended a lecture about upholding the canon of literature and preserving books. I took it seriously and I felt maybe it was time to do my bit. All of our history and knowledge is tied up in books. There is a responsibility to preserve it.”

About a year ago, however, he was diagnosed with narcolepsy, a rare sleep disorder which means the sufferer can fall asleep at random moments and be plagued by disturbed dreams. Holding down a ‘regular’ job became increasingly difficult for Guy. Becoming self-employed, though, was a viable option. He talked over the idea for the bookshop with his partner Simone and just went for it.

“Straight in at the deep end,” he told me. “I got a lot of support from the Job Centre; they signed me on to a scheme called the New Enterprise Allowance.”

This scheme gives people support with setting up their own business whilst providing six months’ grace from having to sign on or be actively job seeking. It was perfect for Guy. The support provided by the scheme was withdrawn one month after the shop opened. So how has it been?

“I didn’t expect things to progress as rapidly as they have done really,” said Guy. “It’s been a journey.”

Certainly it was a journey that might never have set sail if it wasn’t for Guy’s resourcefulness. On opening there were no books to sell. “I spent the first month selling imaginary books to imaginary customers,” he explained. “I solved the problem by buying an unseen lot of books for 99p. I got fifty boxes.”

And it wasn’t all Mills & Boon. One particular book was a real gem: “Going through all those boxes was great, like unwrapping a present each time. One of the books was a 1969 Snoopy colouring book in ‘as new’ condition – totally unmarked,” said Guy.

Serendipity, however, is not enough to sustain a commercial enterprise. Guy is well aware of this and knows that his second year will be crucial in sustaining the business.

“Recently I’ve been doing some creative writing with a charity group. It’s for individuals recovering from drug and alcohol problems. As a business we are interested in working more with charities and community groups.”

This is just one method of both sustaining a business as well as providing a space for creative voices within Lincoln – something that Guy is keen to be a part of. Wilgress is a spoke in a wheel beginning to gather pace, he tells me. I asked him why he thinks that Lincoln is having something of an artistic resurgence right now.

“Lincoln is catching up with what is going on in other places,” he said. “There’s more of a can-do attitude at the moment. I think some of it is to do with there being more diversity in the population. There’s lots of little cells of poetry groups. One that I’m interested in is called the Mouth Piece Poets. I’m pleased to see that they’ve got the confidence to step out there and say we can do this as well.”

Aside from holding regular spoken word nights and workshops, Guy is planning a series of talks to be delivered by writers and artists, as well as building on the success of recent audiovisual installation events, like Josh Eden’s ‘Fractured Contents’.

When I asked Guy about his own poetry and why poetry matters, his passion and enthusiasm shone through: “Poetry is relevant because it isn’t mass media, it isn’t bombardment,” said Guy bringing his chair closer. “Poetry is just a word. Poetry is reflective of what the poet is perceiving.

In a world where all thoughts, feelings and emotions are continually broadcast on the Internet, it is easy to understand the refreshing power of a considered spoken word. That is why a bookshop, especially a bookshop that is part of the growing spirit of its town, like Wilgress Books, remains so important.