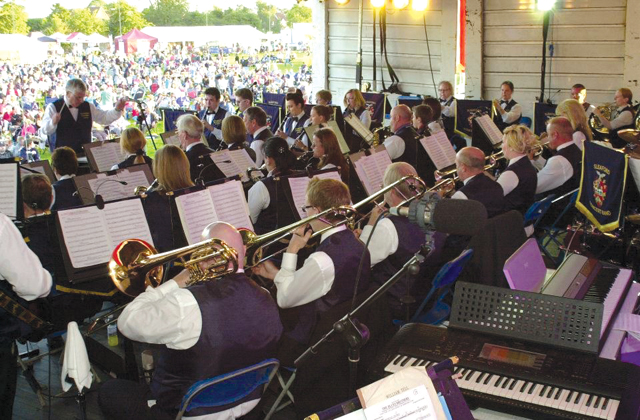 Music for all in rural areas

The Sleaford Concert Band, formed on 9th May 1998, began as a collection of musicians who met once a week to play and share their passion for music. Years later, it has developed into one of the leading wind bands in Lincolnshire and has been nominated for numerous awards for its charity work, having raised over £30,000 in the last ten years for charities including the Royal British Legion and Help for Heroes. As a result, the Concert Band was nominated for The Queen’s Award for Voluntary Service in 2012 and although it was unsuccessful, the band did get into the last five nominations from the whole of Lincolnshire.

The Concert Band prides itself on its extensive music repertoire and performs pieces from almost every genre including classical, big band jazz, film and light concert pieces. It consists of forty-eight amateur and semi-professional musicians who rehearse every Saturday morning at Sleaford Methodist Church Hall, to produce a very professional sound. Musicians of all generations, from ages ten to seventy-three, travel across the county in order to enjoy ‘musical satisfaction’.

Jim McQuade, the band’s musical director and founder said: “We have never lost sight that we are an amateur band with a motto ‘music for all in a rural area’. We would like to encourage people of all ages and reach out to people in the smaller communities.”

The band has become a big part of the lives of Jim and vice chairman, Jayne Field, who have devoted a significant amount of their time towards making the band a success. “It has taken over our lives,” said Jim. Jim has twenty-two years’ experience with the Royal Air Force Music Services and has spent the last twelve years teaching young people music. Jayne takes responsibility for the day-to-day running of the band and all matters of administration. She was awarded an MBE in the 2013 New Year Honours List for services to Sleaford Concert Band, music in Sleaford and communities in North Kesteven. Jim, who nominated Jayne for the award, said:

“Jayne dedicates so much of her time to the band. That is why she was awarded an MBE.”

Jayne first got involved when her daughter, Emma-Jane Pendrigh, joined the band to play trumpet fourteen years ago. She loved listening to the music and enjoyed meeting new people who shared her interest for music. Jayne was delighted when she received written confirmation of her MBE.

“I am overwhelmed by this award. I just wish my parents were still around to have enjoyed and celebrated in this wonderful news with me, as they were avid supporters of the Concert Band.”

Jayne took a trip to Buckingham Palace to receive her MBE in March. At the same ceremony London Olympics chief, and former runner, Lord Coe was made a member of the Order of the Companions of Honour and Sir Ben Ainslie, the West Country’s four-time Olympic sailing champion was knighted by Princess Anne.

“I had been looking forward to my visit to the Palace since I first heard the news. It was a great day,” said Jayne.

As well as the main Concert Band there are several other bands to manage. The training band was formed in 2000 to introduce new musicians, young and old, to the delights of playing music in a band. It too rehearses every Saturday, before the main Concert Band, and acts as a proving ground for those who are not ready to join the main Concert Band. Ken Garfield has conducted the band for over seven years and has led the band both in rehearsals and public performances.

“There is a very friendly and happy atmosphere at rehearsals. Ken is a master of getting the best out of inexperienced musicians, both young and old,” said Jim.

Miller Magic, the Glenn Miller tribute band, has the full big band lineup including five saxophones, four trumpets, four trombones, rhythm section and vocals. The tribute band is perfect for a 1940s evening and has proved to be particularly popular after receiving three standing ovations at its first engagement.

“This type of music proves popular even after thirty years. At our last performance we couldn’t get off stage,” said Jim.

The Sleaford Concert Band has four main engagements each year. It will perform at the Heckington Show Concert for the tenth year on 27th July, in front of 3,000 people during the Fireworks Spectacular. Later in October the band will appear at the Sleaford Poppy Prom to raise funds for the Royal British Legion, a charity for which the band usually raises £5,000 each year. The band has also recently released a CD which was recorded at last year’s Sleaford Poppy Prom to raise funds. Traditionally, the prom takes place at Sleaford Parish Church, but this year the event will be at St George’s Academy, Sleaford on 19th October in their brand new concert hall.

In addition to its regular concert and festival work, the band undertakes foreign tours. In 2000 it visited Marquette-Lez-Lille in France as part of the twinning agreement with Sleaford. They returned to Lille in 2009 and visited Berlin in 2011. This year the band will spend five days touring Paris in May and are looking forward to performing at the Notre Dame Bandstand, Euro Disney and L’eglise de la Madeleine Church.

“We have been privileged to be able to play at some incredible places. We performed at the Kaiser Wilhelm Memorial Church, in Berlin. It has blue coloured glass bricks, so inside the church everything is tinted blue,” said Jim.

The Sleaford Concert Band owes much of its success to its supporters and audiences. With at least four main engagements a year and a foreign tour booked, the Sleaford Concert Band is going from strength to strength. It intends to introduce a new uniform and have members kitted out by the end of 2013. The design has been agreed, but now the band must raise funds to cover the costs.

Sleaford Concert Band is available for hire at any time of the year. For further details or a quote for your engagement please contact Jim McQuade on 01529 303661. Players wishing to become a member of the full Concert Band need to be at least Grade Three and should be prepared to audition with the Director of Music.