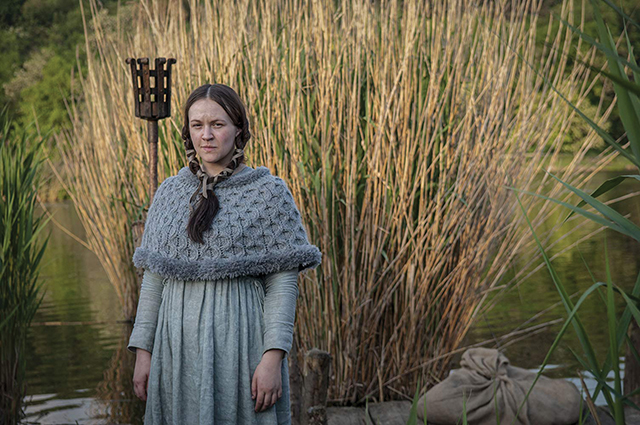 Filming for the TV series The Last Kingdom may have taken her all the way to Budapest, but Lincolnshire-born actress Eliza Butterworth was never far from her beloved home county, she tells Kate Chapman.

The 27-year-old, who was born in Lincoln and has lived on the outskirts of the city all her life, was cast as the wife of King Alfred the Great in 2014 – and was thrilled to discover her character had links to Lincolnshire too.

Based on The Saxon Stories, by author Bernard Cornwell, the Netflix original series retells the events of the birth of England in the ninth and tenth centuries and has recently been confirmed for a fifth series.

“I love playing Lady Aelswith – she’s such a fierce and devout character, supporting her husband and helping to create his vision of one England,” explains Eliza.

“Her father was a nobleman and she’s from the Kingdom of Mercia – Gainsborough in fact, where it’s rumoured she married King Alfred, so she was from Lincolnshire too! Finding all this out felt like me getting the part was fate!

“It’s been the role of my career – she’s so different to me, so it’s a real challenge playing her. It’s also quite amusing that the two actors who play my children are the same age as me in real life and I’ve also been made a Saxon grandmother in the show too!”

Eliza, who attended Lincoln Minster School, admits acting wasn’t her first-choice career until she got bitten by the bug after taking part in a school play.

“I think my parents were a little worried about me when I was a child. At home I was always putting on little plays for them or my teddy bears, but at school I was very quiet and shy.

“Then, when I was a teenager, I was cast in a play – it was a comedy production and I had to perform a monologue. I was absolutely petrified about it – but I did it and everybody laughed, I couldn’t believe it!

“And that’s when I got bitten by the bug – and I completely get what people mean by that phrase, as it’s exactly what happened to me. Having people watch me – and laugh at me – well, I thought, I could get used to this!”

Eliza took full advantage of the fantastic support available from her school’s drama department and was cast in a variety of productions ranging from Ibsen to Guys and Dolls before staff encouraged her to apply for a place at drama school – a stark contrast to the career in dentistry she had been considering at the time.

“I was head girl and studying for my A-levels, I was pretty busy and acting school wasn’t something I had really considered. I wasn’t from an acting background. My mum was a nurse and my dad was an RAF pilot but without my school’s support I wouldn’t be where I am today.

“My family and teachers all helped me get my monologues together. I applied for all the major London schools and RADA was the last one,” she adds.

It took six months for Eliza to work her way through the rigorous four-round application process along with 5,000 other hopefuls, who were all vying for 28 coveted spots.

“My chances of getting a place were really slim, so it was beyond my wildest dreams to get in when I was just 18!” says Eliza. “I moved down to London, which was so much fun and such an exciting adventure in a city that had so much to offer. I met people from all walks of life, from all over the world, from different ages and backgrounds – I loved it.”

On graduating, Eliza landed a number of television roles including Lucy Hamilton in WPC 56 for the BBC, and ITV’s DCI Banks, in which she played Holly in one episode and then in 2014 she was cast as a lead in The Last Kingdom, one of her biggest roles to date.

“Normally I am quite a silly, goofy person – but I seem to be drawn to playing older, very forceful women, like Lady Aelswith.

Eliza is due back on our television screens again later this year when she appears alongside Colin Farrell, Stephen Graham and Jack O’Connell in The North Water on BBC2, a four-part adaptation based on Ian McGuire’s novel of the same name.

Set in the 1800s, the story follows a whaling expedition from Hull to the Arctic where a brutish killer is aboard the boat. Eliza plays Hester, a character she describes as a lady of the night working on Hull’s dockside.

Looking further ahead she is keen to get back on stage once the theatres are able to reopen, as well as taking on a variety of more film and television work.

“From going to watch pantomimes and shows at the Drill Hall in Lincoln with my parents, as well as in the West End, theatre holds a very special place in my heart,” says Eliza, who enjoys returning to Lincolnshire whenever she can to catch up with friends and family.

“I loved my time studying at RADA – we performed a lot of Shakespeare and Chekhov. It’s a very different way of performing to television and film, as having the live audience there gives you an immediate reaction and they are so immersed in your world right alongside you. So, I’d love to do more of that – a dream of mine would be to perform Shakespeare at the Globe.

“I’m very drawn to historical stories and have often been cast in classical works, but it would be so exciting to do something a little more comedic in the future to show off my goofy side too!”