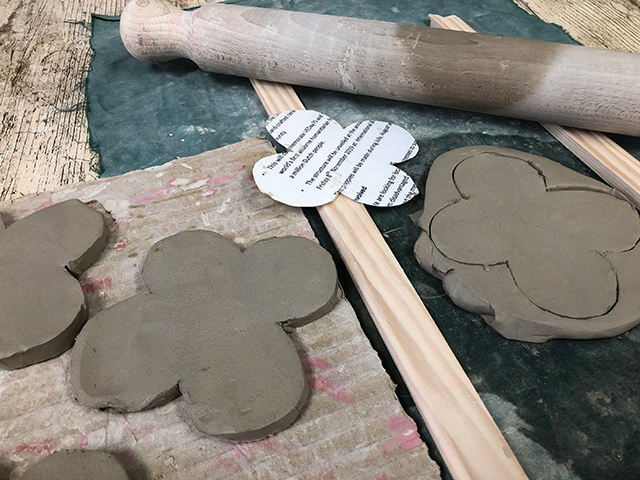 On 8th November a beautiful new installation of hand-crafted ceramic poppies will be unveiled at the International Bomber Command Centre, Lincoln. Caroline Bingham visited The Little Pottery Studio to join a group creating their clay blooms.

Individuals and groups have been crafting poppies at IBCC and The Little Pottery Studio at The Lawn during July, August and September and I joined one of the final sessions to be making their contribution.

This has been a cross-generational project which has appealed to a wide audience from the local community. With almost 2,000 individual flowers required it has been a mammoth task involving school and club groups, families and first time potters.

Jemma Stimpson, owner of the pottery studio, has worked closely with IBCC to design a fitting memorial to commemorate two important anniversaries in 2020: VE Day 75 and the 75th anniversary of Operation Manna, the world’s first airborne humanitarian food aid mission, which saved the lives of nearly a million Dutch people.

Pauline Moore was the instructor for our session and she began by describing the Corten steel structure, a cylindrical tower two metres high and two-and-a-half metres wide, which will be covered with the poppies and located on a site outside the main entrance to the Centre. This is the same material from which the Memorial Spire is fabricated and will echo its weathered finish, as well as being relatively maintenance-free.

The studio was well equipped with tables and benches as well as plenty of tools to share amongst our group of ten.

An expert demonstration from Pauline followed, showing us the technique we would use to create our four poppies, two of which would be used for the project. We were then set loose to begin rolling out our clay using guides to maintain the correct thickness and cutting out our template of petals. Clay is certainly a very forgiving material and as Pauline had said, everyone was actually creating their own unique versions of the flower. We all showed great concentration when it came to melding petal edges together with slip, creating the disc like stamen from a mould and marking in the clay the illusion of veins. We lastly worked a small hole in the base of each flower to try to mitigate the chance of them failing in the kiln.

The installation will be created using predominantly red ceramic poppies but a ribbon of purple and white ones will also wind its way round the tower to mark the animal and civilian casualties in war.

It was certainly a very relaxing way to spend the afternoon as we moulded our poppies ready to be left to dry and then be fired to a biscuit finish. It would be the job of several other volunteer groups to come into the studio at a later date to apply the glazes. With time already racing along, Pauline said it would be a tight deadline to get all the pottery finally glazed and fired.

The project has been funded by the fees paid by groups like ourselves and local business sponsors but there is still a shortfall to fund the Corten steel frame. If you would like to make a donation you can do so by contacting Jemma or Pauline at the pottery studio.

The structure will be formally unveiled at 2.30pm on Friday 8th November 2019 during an invitation only event at the IBCC.

To find out more about pre-bookable ceramic making events for individuals or community groups visit: www.thelittlepotterystudio.com to see a list of available dates, where you can book online or by calling The Little Pottery Studio on 01522 536535.