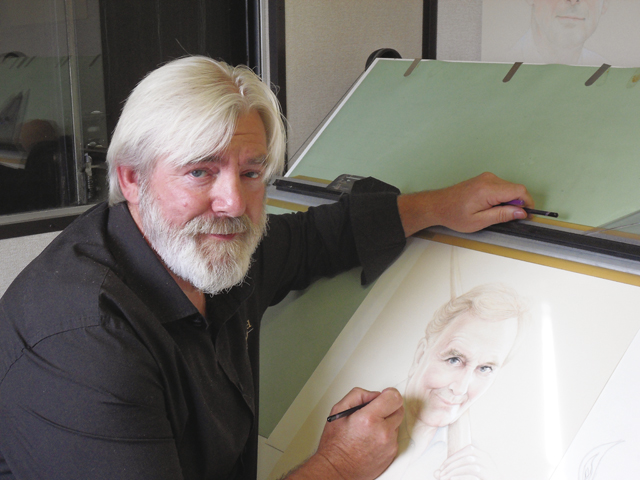 It isn’t every day that you encounter the Astronomer Royal, George Stubbs and John Harrison, the ‘Father of Longitude’, all above life-size and immortalised in wood.
It isn’t every day that you meet as talented a woodcarver, sculptor and artist as the man who created these incredibly detailed masterpieces either. O Howard Boyd loves to create works of art above life-size in wood, and his individual technique of providing an astonishing degree of detail and realism has to be seen to be believed.

Howard is a remarkable character – larger than life, like his creations. I met him at his studio in Barton upon Humber and felt immediately at home with this genial giant of a man – who has what could certainly be called a crushing handshake. I wanted to find out more about O Howard Boyd – a Barton Watersider and the man behind such wonderful works.

We settled into an interesting conversation about his early life and I learned some surprising facts about his formative years. I put it to him that he must have had a great interest in art from quite an early age. He agreed, informing me that even with the school handwriting and art competitions, winning every year did have a negative effect in that too much was demanded too soon and was restrictive.

His approach to life generally has in the past been somewhat rebellious, he disclosed to me. There was a definite twinkle in his eye as he went on to explain how he has always had to have his own ‘take’ on things and that, for as long as he could remember, he has lived with something of a self-confessed arrogance concerning his work. He explained to me that his philosophy of never following the norm had worked to his advantage over the years, as had his decision to rarely associate with other artists. From leaving school, he told me, he never had an art lesson but had certainly given plenty.

Upon leaving school, various career paths beckoned Howard. The usual jobs in the farming industry were always there, as were the traditional seashore trades, but he always knew that an art based career was ever the clear favourite. From his initial training in draughtsmanship, Howard progressed into technical illustration. He developed a love of pen and ink work as he moved through a variety of positions in draughtsmanship and illustration.

He went to university at around the age of thirty-eight, after which time a major career change occurred. He had always had a fascination with making things and he launched out into the manufacture of furniture. He took on an apprentice whom he envisaged would later become a partner in the business, but fate was to deal a cruel blow by way of a fatal road accident. Tragedy was to loom again later for Howard, with the death of his son.

Howard’s interest in working with wood increased dramatically over the years. With an ongoing passion for the history which surrounded him, combined with his incredible talent for representing the finest detail, it was inevitable that prestigious assignments would be laid at his door.

He is currently working on a large plaque depicting the artist George Stubbs for the church at Barton. He has many other carved masterpieces to his credit, not least of which is the amazing figure of John Harrison, the ‘Father of Longitude’. It was the publisher, poet and arts patron Felix Dennis who had asked Howard to carve the figure especially for his corporate premises at ‘Highfield’. As with other historic greats that have graced the county, Harrison was one of Howard’s heroes and this great inventor’s immortality in wood was to become one of the most exciting challenges of his career.

The sculpture, which consumed twenty-five cubic feet of limewood from the Brocklesby Estate, near to where Harrison lived and worked, reflects the many facets of Harrison’s life. For forty years he was a carpenter at Barrow upon Humber, in addition to holding the offices of local constable and juror of the Lord of the Manor of Barrow. He was also bellmaster and choirmaster of the local Barrow church. His story is one of intense frustration, underhand dealings and personal stress as well as overwhelming genius.

Through the study of bells Harrison developed and understood pendulums, eventually coming up with the idea for the perfect marine clock which would accurately record longitude positioning. His invention was to revolutionise navigation and in turn play a major role in the shaping of the British Empire and the Industrial Revolution.

Howard told me that he has always loved a good jape at the onlooker’s expense. The sculpture of Harrison has afforded the means to do this – by the cartload! Harrison sits on a barrel of sauerkraut before his workbench cogitating over his invention and theories. Captain James Cook had proved the capabilities of the clock as a means of keeping the longitude alongside his own solving of the scurvy problem. On the bench is a wheelbarrow full of holes with three crosses inside it – Barrow’s church is the Holy Trinity.

Other witty ‘puns’ Howard incorporated include a globe and chessboard; the masculine symbol under Harrison’s foot, indicating his eventual triumph over corporate diversity regarding payment; and a scroll and compasses – the £20,000 challenge to find a way of establishing longitude at sea. There are other subtle cryptic messages making this a work of pure fascination that demands very close inspection. Howard’s attention to detail with all its attendant realism makes this work a joy to behold.

His preoccupation with John Harrison did not finish with the completed sculpture of ‘Longitude’. So enamoured with this great man’s invention had Howard become that, in addition to giving talks on his life and achievements, other works were created within this genre. The 14th Astronomer Royal, Prof. Sir Arnold Wolfendale FRS is a friend and mentor and has become one of Howard’s subjects for a carved portrait bust. This has been created for the National Portrait Gallery, where Howard is also a registered artist. He informed me about his bout of illness a while ago which necessitated that he refrain from heavy carving work, whereupon he turned his attention to portraiture.

The portraits that he has produced are nothing short of sensational. With his usual attention to the finest details, he has found a formula to generate the most delicate representations of personalities, all with eyes that literally follow you around the room. The John Harrison story has been continued with portraits of Jonathan Betts MBE, Curator of Horology at the Royal Observatory, Greenwich; Dava Sobel, author of the book ‘Longitude’; Will Andrewes; Andrew King; and Dr John Taylor. Robert Hardy, the actor and author of ‘Longbow’, is his latest work. There are plans for an exhibition of his portraiture entitled (what else?) ‘The Eyes Have It’ at Bardney Hall, courtesy of Mr Colin (Bud) Booth.

This man of many talents and master of so many different mediums has numerous beautiful works to his credit, but his greatest claim to fame is his carving of the Imperial Crown – the centrepiece for the Royal Diamond Jubilee Coach ’Britannia’. The proudest chapter of his life began as a result of the request he received to create the Imperial Crown for the new State Coach. I was surprised to learn from Howard that the original concept was offered to him as far back as 2005 by the Royal Coachbuilder, Jim Frecklington who had learned of ‘Longitude’ and other works from articles in a magazine Howard writes for.

The new coach was to have special features contained within its construction. These were to include something from every British cathedral, royal palace, historic ship and aircraft; a fragment of the Stone of Scone, and copies of the Magna Carta and Domesday Book. The Admiralty released a section of timber from HMS Victory specially for the creation of the Imperial Crown.

This was to be a work unlike any other for Howard. The timber itself presented difficulties unique to its age and the complexity involved with the fashioning. With the assistance of Roy Smith, a Barton joiner with extensive woodturning experience, the crown was first hollowed out for the purposes of fitting a copper liner inside. This was also made from one of the cladding sheaths from HMS Victory.

The interior compartment of the crown contains the special surveillance equipment for the coach. The whole manufacturing process took three months, with all work being carried out at Horkstow. The coach had its first public ‘airing’ for the State Opening of Parliament this year, which Howard witnessed, by special invitation, from the palace yard followed by a reception at the Royal Mews. He was presented as a Freeman of the City of London but was proudest to be named a Freeman of the Worshipful Company of Clockmakers, which honours his Harrison scholarship.

Howard is the first to agree that this was his own crowning achievement. As he pointed out to me, it is quite unlikely that another Royal coach will be built for at least 200 years. During that time, his skill and craftsmanship will adorn the Britannia Coach, with future monarchs travelling underneath a crown made in a very special way – Howard’s way.