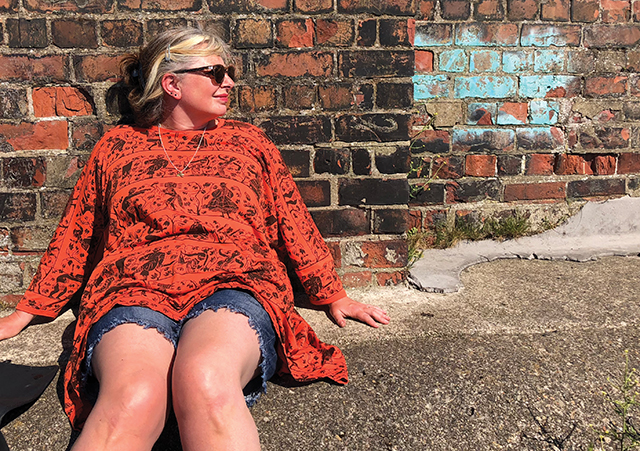 Portrait of an artist

The Cleethorpes coastline surrounding her home is a huge inspiration to artist Linda Ingham. She spoke with Kate Chapman about her work, which recently has focused on landscape and the passage of time.
Linda, who has exhibited her pieces around the world, has always been passionate about painting and drawing, but didn’t pursue a career in the arts until she reached her mid-30s.

Since then she has worked in adult education teaching, sharing her expertise and knowledge with others, curating displays as well as focusing on her own projects and working in collaboration with others.

Most recently (March 2019) one of her paintings, Easter Self Portrait with Cocoon, has been on display as part of a major new exhibition at The National Museum of Poland, showing just how vital Europe has been to the British painting tradition.

Made in Britain consisted of eighty-two paintings by artists from all over the UK including Tracey Emin and David Hockney, alongside works from the Priseman Seabrook Collection of 21st Century British Painting, in which Linda’s work is featured.

The collection was set up in 2014 by artist Robert Priseman, who wanted to do something to promote the art of painting and Linda is delighted to be a part of it.

“Much of my portrait work has been influenced by artists whose lives have begun in other countries and it’s very satisfying to be part of a multicultural, practice-led platform such as the Priseman Seabrook Collection, which is taking the discipline into the twenty-first century,” said Linda.

“My work tends to be more down the museum and exhibition route, rather than commercial and I’m fortunate to have pieces in several collections in this country, America and China.

“My style is contemporary, mainly printing and painting, but I like to mix techniques up and make them more unusual.”

Linda’s love for art stems back to her childhood when she whiled away the hours painting and drawing, although it wasn’t until much later in life that she decided the time was right to make it the focus of her career.

“As a child I was always painting and drawing and I had the opportunity to go to St Martin’s to study but at that point I’d never been to London, I didn’t really know anyone who had been to college and I just felt it was too scary to contemplate,” recalls Linda, who has always lived in North East Lincolnshire.

“I ended up doing a variety of other jobs, working in factories and shops, plus singing in a couple of bands as I was interested in music too, but I always painted as a hobby, I never completely stopped.

“Then I worked for twelve years for an organisation that printed signs, which allowed me to be quite creative but someone else I knew was studying through the Open University, so that encouraged me to give it a go and it was a real turning point for me.

“Education gave me confidence and from there I went into teaching too, including twelve years teaching art and design in adult education. There are quite a lot of different subjects within that, but portraiture and life drawing were the main focus of what I did and I still teach both of these as a freelance.”

In 2007 Linda completed an MA in Fine Art at Lincoln University School of Art, Architecture and Design and the following year she began curating exhibitions for venues including Grimsby’s Abbey Walk gallery and writing funding applications for herself and others.

She has also worked on several Arts Council funded projects including Far & Near in 2016, in conjunction with her husband, composer David Power, which comprises of a bespoke memorial bench, series of works on paper and music with film.

More recently she’s been curating exhibitions at The Steel Rooms, in Brigg, developing its programme about landscape and place and later this year, between September and November, she will be holding an exhibition at The Collection, in Lincoln, again in conjunction with her husband.

Over the past ten years Linda’s work has also been exhibited and collected by a number of art museums in the UK and United States including The University of Arizona Museum of Art, Swindon Art Gallery, Rugby Art Gallery and Museum and The Komechak Art Gallery, Chicago.

She said: “I work in quite a few different mediums and do a lot of printing and painting.

“I’ve used flowers and plants that I have picked up from my walks along the coastline to create paintings using watercolour or gouache and I also do film and installations, as well as some collaborative projects.

“My inspiration varies; I have always been interested in history and the passage of time and recently I’ve developed an interest in botany too, gathering specimens while out walking the coastline and doing some plant-based work.

“I like studying things which are often considered weeds, or are overlooked, as they often have a rich folk history or were used for medicinal purposes.

“I’m really aware of our surroundings and how much we need plants and wildlife and so some of the work I’ve been doing lately articulates that.”

Linda’s interest in the natural world has extended into the undertaking of a three-year project in conjunction with the RSPB, which is developing an ex-arable farm field into a meadow.

She has also taken on two allotments to increase her own attempt to live sustainably, develop wildlife habitats and keep learning.

“I absolutely love being outdoors, although I guess there’s nothing better than being in my studio just concentrating on a piece of work, painting or drawing, that’s something that I really love, and now I’ve got two studios – one at home and one at the allotment,” she adds.

“It’s taken me about twenty-five years to get this far; unfortunately with art, opportunities in Lincolnshire are few and far between and the effort you put in does not always translate into what you get back, but it’s all about getting your work out there.

“That’s why I have to do other things such as curating and writing funding bids but I thoroughly enjoy it.”

To find out more about Linda and her work visit www.lindainghamart.com