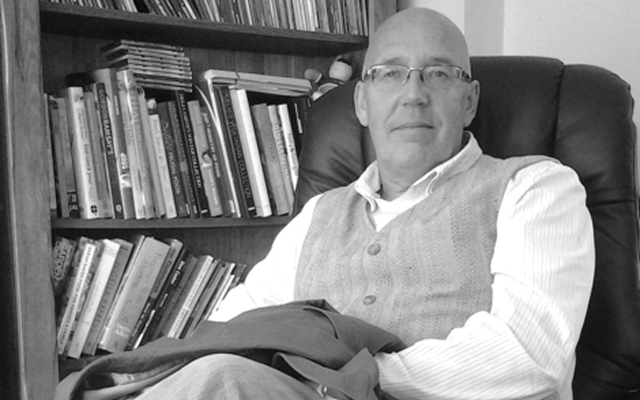 Putting crime in the frame

Spencer Coleman is a successful painter and gallerist who has been based in Lincolnshire for more than thirty years. A Call to Witness, published this month by Caffeine Nights, is his second novel and the second to feature art dealer Michael Strange.
His first novel, All the Rage came about following a request from a solicitor to meet with a client to value a collection of art as part of her divorce proceedings. Making a house call, Coleman was met by an alluring woman who made a striking impression on him. After the encounter, Coleman began to imagine what intrigue he might have been drawn into had he allowed himself to stay with this seductive stranger and he soon had the basis for a fictional thriller which blended art and crime.

“I wanted to see how far the gallerist would go. I wasn’t then what I would call a sophisticated art dealer, but the character Michael Strange is. It became as much about this character’s descent into madness, as her hold over him, against the backdrop of a murder.”

Coleman’s interest in creating evocative images with paintbrush and pen alike has been with him from an early age. He wrote a novel at the age of twenty, but admits it was “dreadful”. Feeling more assured of his talents as a visual artist he pursued a living as a painter, moving to Lincolnshire thirty-three years ago when the county offered the sort of cheap living suited to his chosen career.

Managing to earn a livelihood within six months of moving, Coleman had by this time fallen in love with Lincoln. Having established friendships with other artists, when the opportunity arose for Coleman to open his first gallery he did so. Splitting his time between his galleries in Stamford and Lincoln over the past three decades, Coleman today works alongside his son Jordan, to showcase a stable of international artists.

To gaze at the works hanging in the Exchequer Gate gallery in Lincoln does not bring to mind the eroticism or violence that is found in Coleman’s stories. His taste for pictures is traditional, with colourful still lifes, landscapes and figurative studies by artists from all over the world filling the walls.

The world in which Michael Strange moves, however, is lurid and fraught with danger. Mixing fiction with the trade knowledge and detail familiar from his everyday work, Coleman found an enthusiatic audience for his first book, but the writing process was far from straightforward. Four or five years passed before he found a publisher.

“I knew I had the bones of a book. People were telling me that it was good, but that it would be rejected. So I took the advice of somebody I knew and sent it to an editor. She tore it to shreds.”

His contact, author advisor Hilary Johnson read the manuscript and despite her enthusiasm for the idea, responded with thirty-five pages of notes underlining what she saw as the flaws in the draft. The input forced Coleman to hone his skills and rewrite the story in under a month. He found a publisher soon afterwards.

“A lot of people would have got so depressed but Hilary was so passionate and had taken the time to provide thirty-five pages of advice. She taught me how to craft a novel and the blinkers just came off.

After a cliffhanger ending, Coleman decided to conclude Michael Strange’s story in a second novel. Lacking long-term commitment from his first publisher, he sought support elsewhere while writing the new title, A Call to Witness.

Caffeine Nights has now reprinted All the Rage to coincide with the lastest novel. Following their advice, Coleman was careful to devise a narrative mechanism that would allow readers picking up the newest book first to get up to speed with the action.

“I used newspaper extracts, which the characters refer to. Michael Strange is a celebrity art dealer so I knew that if this happened in real life the gossip press would be all over it. And because it involved murder I also knew that the press would hound him.”

Coleman’s passion for writing has not led him to walk away from the canvas either. He said: “If I was given a choice I would probably write full-time. But I have three jobs: I run the galleries, which I love; I paint pictures, which I love and the demand is there; and I also love writing. The writing is now something I think about mostly, but I’ll never not paint. If I wake up in the morning and feel a bit low as far as writing is concerned I’ll turn to painting, and vice versa.

“My third book I wrote in six months. It is far removed from the Michael Strange story. That will come out at the end of 2015. It’s also written in the first person, which I thought I’d struggle with. In the third person you have to keep setting the scene. In the first person, there’s an immediacy; you’re there, straight into everything, it drives the story very quickly.”

Coleman is clearly seizing his literary inspiration and putting the eye for detail he has developed in his visual art to new uses, to create new settings, sensations and moods with words.

A Call to Witness is published by Caffeine Nights www.caffeine-nights.com. See next month’s issue of Lincolnshire Life for our review.

BOOK NEWS
Kay Publications has released a new book, Swineshead at War. Written by Pamela Southworth the book traces the stories behind the names on the village’s war memorial. For more details visit http://www.richardkaypublications.com/

The line-up for this year’s Lincoln Book Festival, which runs from 29th September to 4th October, has been announced. Guest speakers will include broadcaster Andy Kershaw and Chris Bryant MP. For more information visit http://www.visitlincoln.com/whats-on/lincoln-book-festival-2014 or telephone 01522 545458

Bookaholics, a new value for money bookshop has started trading at 22 Eastgate in Louth. The shop has already welcomed familiar faces from stage and screen, Paul Elliott of The Chuckle Brothers and Ken Dodd.