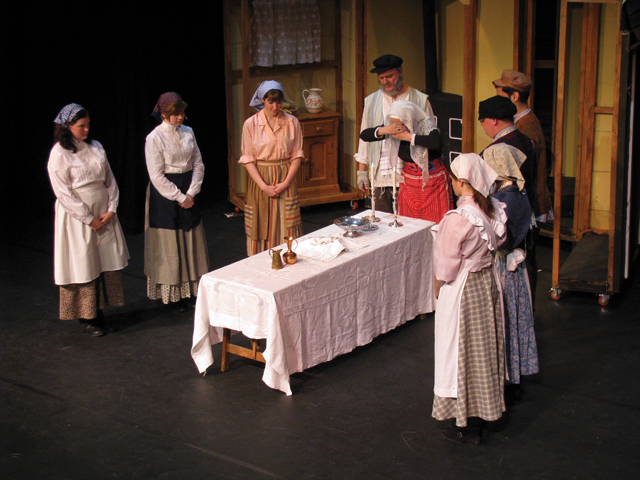 Putting on a act

Spalding Amateur Dramatic and Operatic Society (SADOS) was the first society of its kind to be established in mainland Britain. Jean Rush finds out about its history and its current activities.
The chairman of SADOS, Bryn Chappell, says there may be a discrepancy in the figures: “Some say we were formed in 1866, but I think we can prove 1870.”
Whatever the date, a group of Spalding gentlemen formed an amateur society for the performance of plays, employing professional actresses. There must have been music involved, as the accounts show £5. 5s. paid to an orchestra.

Bryn explained: “That continued for fifty years or so, until in 1928 an amateur operatic society was formed to present musical plays, and the union of this society with the older one created SADOS as we know it today.”

It’s believed that there is an even older amateur dramatic society on the Isle of Wight, but Spalding can claim to be the first town in mainland UK to present amateur shows.

Meeting Bryn Chappell during the interval of the SADOS production of ‘Fiddler on the Roof’, at the South Holland Centre last May, I asked him how he came to be involved: “Two ladies came to me in February 2003 and said they had a job for me. I had been chairman of the leisure services committee for many years, so I had an attachment to SADOS. The ladies asked me to be the SADOS chairman, and as I knew I was leaving the council I said, ‘If there is a job to do I will tackle it’. I’m Spalding born and bred, and have been coming to SADOS shows since I was a child, first with my parents, then with my wife, but I have never had any ambition to go on the stage. I think SADOS had lost a few of its more senior performers and were in the doldrums, although they were still putting on excellent shows. We gained some very good new members; there were newcomers to the area wanting to perform, and we now have our own directors, and a musical director. Amateur theatre is alive and well in this area.”

I asked Bryn if the members see it as a hobby, and if some of the young ones want to go into the theatre? “Obviously some of the older ones are doing it for fun, but there’s a girl on stage tonight, Abigail Bourne, who may have a great future. As a seventeen-year-old last year she played the lead in ‘Me and My Girl’. She has won our 2012 Tom Moss Award for Best SADOS Newcomer and wants to go on and do professional theatre. It’s fantastic for us to give the players opportunities that they wouldn’t otherwise have. The only place they can start professional theatre is right at the bottom, but here they have a chance at lead roles. Sometimes we need more mature people, but we have attracted a good set of young people for this show.

“We are trying to do a professional job, because nowadays people won’t leave their TV sets to come and see something that is not of a high standard. We are striving for perfection; we will never achieve that, but I have been very pleased with what I’ve seen tonight – they never cease to amaze me. I don’t know why these people put the hours in that they do; wild horses would not drag me on to a stage! But I’ve loved working with SADOS.”

In 1969 an urgent need for new scenery flats for the dramatic section led to the suggestion of a pantomime performance to raise funds. SADOS no longer does panto, but is now a registered charity, and as the Society continues to grow it needs the means to fund fresh ideas. Three concerts for the Women’s Institute in September were highly successful, one resulting in a standing ovation.

Bryn said: “We are looking to do more and more of these to raise a little money. One of the main reasons that make musicals very expensive to put on is that we are not allowed to use recorded music. We have live musicians for all our shows. In my time as chairman we’ve only made profit on one musical and that was ‘The King and I’. We are budgeting to lose £1,500 on this show; if we can do that we’ll be happy. We made a good profit on our November production last year, so one subsidises the other.

“As a member of the leisure services committee I helped to get the South Holland Centre built, and I’m interested to see so many youngsters nowadays involved in theatre. Anything that brings kids into the arts in any way is good.”

Having worked in professional theatre, and seeing West End shows as a critic, I knew the challenges undertaken by everyone involved in ‘Fiddler on the Roof’. It was an excellent production of which the company should be proud. With its theme of a Jewish community in Tsarist Russia, this is not an easy show; it has very little glitz or feelgood factor, which made the performance by this dedicated group of thespians all the more impressive. Leading man, Alasdair Baker could have stepped straight off the London stage – his voice and stage presence dominated the show, as it should. The cast were word perfect, and the ensemble singing was beautiful. I picked out Abigail Bourne as outstanding before I knew anything about her, and there are others with great promise, too numerous to name. Top marks, too, to the young cast for having a go at some Cossack dance moves (I’ve seen Cossack dancers in Russia, and believe me it’s the most demanding dance form). The ingenious set was adapted, rearranged and brought into service in every scene, so congratulations to the backstage crew for every change going smoothly. The small orchestra under musical director, Lynne Baker was superb, and I must mention director Martin Tyrrell and co-director/producer Elaine Deathridge, who incidentally is the winner of the 2012 SADOS Award of Merit.

FORTHCOMING EVENTS
At the time of writing, SADOS was rehearsing for a concert of ‘Songs from the Shows’ at Bourne Street Methodist Church in October, and for ‘One Flew Over the Cuckoo’s Nest’, based on the novel by Ken Kesey, to be performed at the South Holland Centre, Spalding from 21st to 24th November.

‘The Vigil’, a controversial play about whether or not Jesus rose from the dead, is to be presented by SADOS during Easter week 2013 at St Mary’s Church, Long Sutton, St Peter & St Paul’s Church, Gosberton, St. Mary Magdalene Church, Gedney St Mary, and St Mary and St Nicolas Church, Spalding.

For a taste of the SADOS experience, head down to Spalding town centre on 1st December and you can enjoy a half hour concert by SADOS members as part of the town’s lavish Christmas celebrations.

It’s hard to imagine a more diverse or creative performing group than SADOS, and anyone who would like to offer support for its invaluable work, whether financially or materially, should contact bryn@d-lweb.net