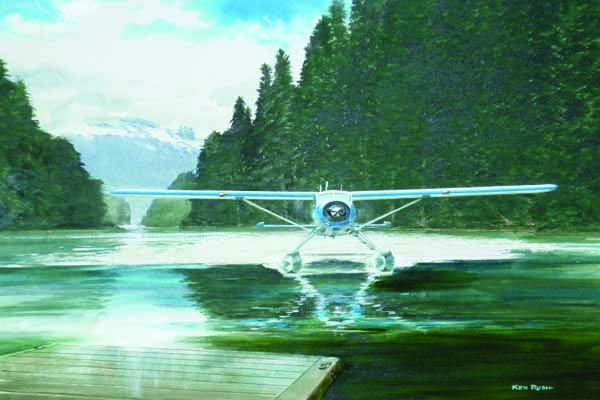 Reaching for the sky

Since he was a small boy, watching the Battle of Britain from the roof of a garden shed, Ken Rush has loved aircraft. Now the Lincolnshire resident has had three paintings accepted for the Guild of Aviation Artists Paintings of the Year Exhibition at the Mall Gallery, London this month.
Understandably, Ken’s parents weren’t too pleased with his rooftop escapade, but his father supported him by staying up all night while his son finished a painting for a ‘Wings for Victory’ competition. He won that and other nationwide painting competitions, but all he wanted to do was fly. Ken joined the Air Training Corps as soon as he was old enough, and became one of the youngest to obtain a glider pilot’s licence, aged sixteen. He joined the Flying Club on Dunstable Downs and was soon flying gliders. On one unfortunate occasion he landed his glider in the bison enclosure of Whipsnade Zoo, but he soon became an expert glider pilot.

On leaving art school, Ken worked for a short time for a stained glass artist, and had the honour of creating two segments for the Battle of Britain window in Westminster Abbey. Joining the RAF for his National Service, Ken was keen to become a pilot, but sadly his eyesight wasn’t good enough. Luckily his training as an artist landed him a job at the Air Ministry in London, designing RAF recruitment stands for exhibitions, and even the RAF float for the Lord Mayor’s Show in London. For the 1951 Ideal Home Exhibition he designed a stand depicting the development of forces married quarters in the previous century. Of course the RAF didn’t exist at that time, it was called the Royal Flying Corps at the time of the First World War, but married quarters had existed from the beginning, and very primitive they were, as Ken’s illustrations showed. Ken was given a special status which went with his job, which put him in charge of all the staff involved in turning his ideas into reality.

On being demobbed, Ken joined Astral Arts in Bond Street, London, a consortium of former war artists who included two of his heroes, Terence Cuneo and Frank Wootton. Thus started his career of producing aircraft paintings of all types in all kinds of situations. His early work included illustrations for box tops of the popular construction kits, such as Airfix, Frog and Revell. In recent years, visiting a toy museum in Cockermouth for a journalistic job, Ken noticed that there was an entire display of box tops, all with his artwork. The museum curator asked him why he was so interested, and when he said he was Ken Rush the curator turned the tables and came to Ken’s hotel to interview him. The article was published in the Airfix magazine.

In the 1970s Ken contributed his meticulous illustrations to the popular series of Aircraft Profile booklets, which are still in demand by enthusiasts. One of these, of the Fokker DXXI, is one of his works in the GAvA show. When submitting it Ken was asked if it was an original, as they don’t accept prints! He was able to prove it was an original, and asked whether the query was a compliment or an insult. Very much a compliment, was the reply.

Ken’s painting of the Battle of Britain Memorial Flight flying over Lincoln Cathedral was commissioned by a local collector, and another interesting commission was a greetings card for a USA collector, depicting a B17 in wartime. His painting of a Boeing 747 landing in Nigerian livery was featured as a gigantic enlargement in Terminal 4 at Heathrow, and his painting of a Boeing 747 for Kuwait Airlines attracted much praise in the aeronautical press. He also created a dynamic painting of Concorde for an Airfix poster, and of the Rothman Aerobatic Team for the Biggin Hill Air Show.

A lifetime’s ambition was fulfilled when Ken flew on Concorde in 1999 on a day excursion chartered by a Concorde pilot. The group gathered at East Midlands Airport, and went by coach to Birmingham for a scheduled BA flight to Paris for the day. They then boarded Concorde at Charles de Gaulle airport for a 100-minute flight into the mid-Atlantic, flying supersonic before returning to East Midlands airport. It was the one and only time that Concorde landed at East Midlands and it was greeted by enthusiastic crowds. For Ken, the highlight was the Concorde pilot (who had organised the trip) giving a running commentary throughout the flight.

Apart from his work with aircraft, Ken has illustrated a number of books on cars for Automobile Quarterly in New York, and his Book of Fantastic Machines, published by Octopus Books in eight languages including Japanese, won him the accolade of European Illustrator of the Year in 1976, with a reception at the Royal Academy of Arts in London.

Another exciting flying experience was a few years ago in Alaska, when Ken was a passenger on a seaplane flight over the glaciers and landed on a lake high in the mountains. This is the subject of one of his other paintings in the GAvA exhibition. The third exhibit is a Lockheed Constellation supply plane to the Antarctic, fitted with special equipment to collect high-flying insects for research.

In recent years, the idea of taking some refresher flying lessons locally was firmly vetoed by Ken’s doctor, who said “don’t even think about it!” so it seems his piloting dreams are gone for ever. But he is happy to live in Lincolnshire, with its wide skies and aircraft frequently flying overhead from the many airfields in this, England’s most aeronautical county.

The Guild of Aviation Artists 2012 Paintings of the Year Exhibition is at the Mall Galleries, The Mall, London SW1 from 16th to 22nd July. It will be opened by Michael Portillo and is open to the public as follows: Monday 5-8pm; Tuesday to Saturday 10am-5pm with Thursday to 8pm; Final Sunday 10am-12.30pm. Admission is free, with walkabout tours and painting demonstrations. www.gava.org.uk