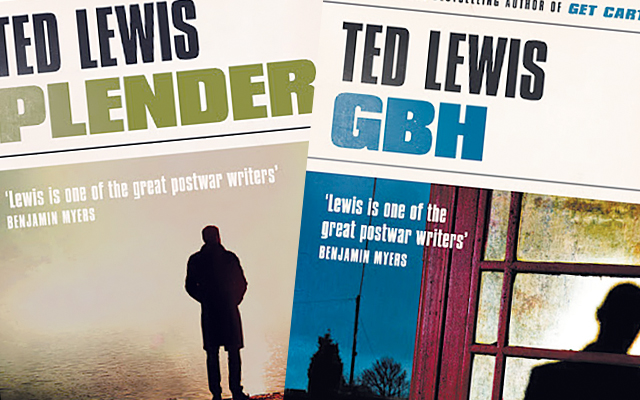 Lincolnshire provides the backdrop for two newly reissued crime novels from the author behind the film classic Get Carter. Review by Yusef Sayed
Plender & GBH – By Ted Lewis
The reputation of Ted Lewis will forever rest on his early novel Jack’s Return Home, a thriller which announced a talented new voice in British crime writing in the early 1970s, and which was adapted for the screen as Get Carter, providing Michael Caine with one of his most iconic screen roles. But thanks to the continuing efforts of researchers, publishers and fans, the rest of Lewis’s work history is coming into focus once again.

Lewis, who also worked as an artist – contributing his skills to an animated TV series of The Lone Ranger and the Beatles’ Yellow Submarine – and as a screenwriter for Z Cars, would never repeat the success he found with Jack’s Return Home and has remained a relatively obscure novelist for decades, despite some acclaim in the US where his later novels have been kept in print in recent years. He died at the age of 42 following years of alcohol dependency.

In Barton-upon-Humber, where Lewis grew up and where he returned in the years prior to his death, his contributions to writing, television and art have been promoted by a local interest group, and in a valuable monograph by Monty Martin that sketches the outline of his biography – from his art college days over the Humber in Hull, to his later design work and fiction writing – for those curious to learn more. But it is largely thanks to Nick Triplow’s exemplary biography, Getting Carter: Ted Lewis and the Birth of Brit Noir, released in 2017, that interest in Lewis in the UK has been revived.

The publisher of that book, No Exit Press, has now reissued two of Lewis’ lesser known novels in the UK, including his final work before his death in 1982. The books confirm Lewis as a writer capable of orchestrating memorable thrillers, full of criminal machinations, character psychology, brutal violence – and picture perfect detail of the Lincolnshire towns familiar to him.

Plender, which followed Lewis’ first Carter novel, is a story of blackmail, envy and repressed sexuality that alternates between two narrators – the chapters simply named for one or other of the two. Following the accidental death of a young woman he has seduced, catalogue photographer Peter Knott is reunited with his old school friend Brian Plender, now a private investigator and fully aware of the crime that Knott has attempted to hide from the police and the wife who suspects his infidelity. As Plender hides all traces of any foul play, only to draw Knott deeper into a sordid underworld, Lewis evokes memories of past humiliations, Knott’s mounting guilt and Plender’s sadistic, scheming behaviour through frank interior monologues, while driving the action forward and maintaining suspense through arranged meetups, loaded questions and blunt putdowns. As the plot unfolds, Plender’s criminal milieu is revealed to be controlled by an ever wider chain of command that eventually brings the two character’s fates together in a fatal climax at a quarry – a location already suggestive of digging the dirt, and of buried remains so fitting for Lewis’s story.

Although Lewis’s hopes for director Mike Hodges to follow Get Carter with an adaptation of Plender were never realised, it was adapted into a French film, Le Serpent, in 2006.

While GBH focuses on one central character, Lewis again uses a parallel story structure, this time switching between past and present, and two locations, ‘The Sea’ and ‘The Smoke’ – right until the moment the two timelines overlap around an act of sickening violence captured on 8mm. Pornographer, George Fowler is hiding out at an undisclosed location in Mablethorpe after the web of gang rivalry, illegal profiteering and police corruption that he has masterfully played to his advantage for years has been pulled apart following revelations of betrayal within his own organisation. Anonymous and drinking himself into an hallucinatory state with a cast of local bar regulars and off-season entertainers, Fowler is plagued by the loss of his wife Jean and mystified by the identity of a beautiful singer who has recently come to the town, inviting herself into his secretive world.

Undoubtedly the stronger of the two novels, GBH finds Lewis painting in the colours, climate and cynical humour of the Lincolnshire beachfront towns known to him – and leads one to suspect that Fowler’s habitual use of alcohol as a way of clouding his mounting personal problems is informed by the author’s own illness.

Film – and the blurring of reality, fantasy and artifice – plays an integral function in the story, with Fowler obsessed by the reels he has locked away in the basement below his garage. When one spool is eventually loaded onto the projector to Fowler’s horror, the blend of the literary and cinematic that Lewis achieves is compelling. The way in which the films that made Fowler his fortune come to haunt him is also conveyed in a comparison that Lewis draws, twice, between the shadow of a Ferris wheel cast along the promenade and an enormous film-spool.

Lewis’ own talents have similarly been overshadowed by the film that was made from his second novel – which, incidentally, saw the action relocated from Scunthorpe to Newcastle – but with these two novels back in print, more readers will have the chance to experience his artful, compulsive blend of hardboiled fiction and local detail.

Plender and GBH are published by No Exit Press, Price £9.99