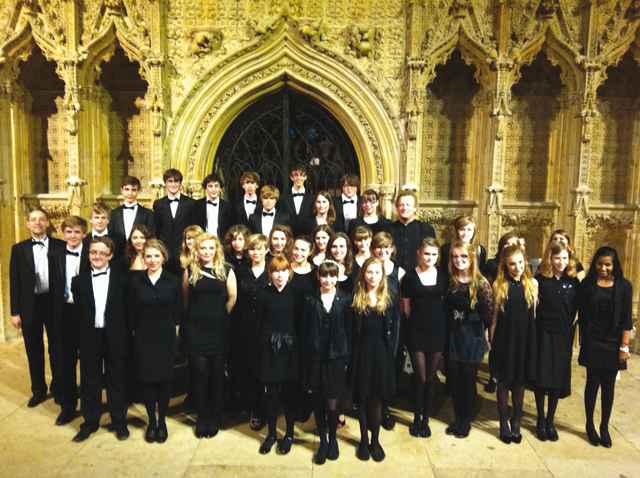 Climbing to the top of the charts is undoubtedly a great ambition for every singer, and for members of a county school choir, teaming up with an award-winning composer has seen their dreams become a reality.
Members of the Lincoln Minster School Chamber Choir were thrilled when they were asked to record part of Classic FM’s Composer in Residence, Howard Goodall’s new album Inspired in London last year. After topping the Amazon Hot New Releases chart this January, the album has quickly shot to glory, climbing from number six to the top spot on the site’s classical chart, beating off competition from Alfie Boe and the Military Wives along the way.

Renowned for its musical excellence, the independent day and boarding school for pupils aged two-and-a-half to eighteen years old, was invited to team up with Mr Goodall thanks to its membership of United Learning – a network of schools aiming to provide excellent education and bring out the best in everyone involved.

A multi-award-winning broadcaster and composer of choral music, stage musicals, film and TV scores, Mr Goodall is best known for his popular television theme tunes including Blackadder, Red Dwarf, QI and The Vicar of Dibley.

His latest album features a number of new works alongside some of his best-loved pieces. Foremost among the new compositions is a brand new ten-part oratorio – ‘Every Purpose Under The Heaven’ – which was commissioned by United Learning to commemorate the 400th anniversary of the King James Bible back in 2011, and which is already being billed as the contemporary equivalent to Handel’s ‘Messiah’.

The Lincoln Minster School Chamber Choir took its place in the spotlight at the premiere of Mr Goodall’s new oratorio when it was first performed at Westminster Abbey, and at subsequent performances in Sheffield, Suffolk and its home city.

“Working with Howard was a brilliant experience; we knew of some of his work and were very excited to meet him,” said chamber choir members, Ollie and Ellie. “He is so supportive and understanding and we were delighted when he asked us to feature on his new album.

“Performing the world premiere of ‘Every Purpose Under the Heaven’ at Westminster Abbey on Remembrance Sunday was awe-inspiring; then to have Howard conduct us at home in Lincoln Cathedral meant that all our friends and family could come.

“The actual recording at the studios in London gave us a great insight into the music industry, something that we won’t forget.”

Mr Goodall, who recently presented a six-part series on BBC2, The Story of Music – which explored the origins and history of music from the year dot to the dot com era – explained the Lincoln choir was chosen to help guide the other singers performing.

He said: “Lots of schools performed this piece all together at the premiere, and in a couple of subsequent performances, and we thought it would be a good idea if one of those schools was like the ‘home team’, to guide all the others along.

“United Learning, which commissioned the piece had lots of contacts and put me in touch with the music director at Lincoln, that’s how it came about, although I had come across the school before.

“The Lincoln Minster School Chamber Choir were a dream to work with, and led larger groups of singers with great skill, warmth and commitment. This was a really happy musical collaboration, I am extremely proud of my association with the school and its outstanding musicians.

“When they came down to London to work with my own choir, it was fantastic, they slotted in as if they’d been performing with them all their lives. It’s really been a fantastic, great experience.”

The school’s director of music, Aric Prentice echoed his comments, adding: “We place great importance on giving young musicians every opportunity to gain experience of performing to different audiences, arranging international tours, professional recordings and free recitals to which anyone can come.

“Some of our students have taken part in professional recordings on several occasions but for others this will have been a first, so they were really excited to hear the CD and see how it performed in the album charts.”

An Emmy, Brit and BAFTA award-winning composer, Mr Goodall has also been England’s first ever National Ambassador for Singing and the Classical Brit Composer of the Year in previous years.

His score for the HBO film Into the Storm won him an Emmy award for original dramatic score in 2009, while he was awarded a CBE for services to music education in 2011.

Inspired is already being hailed as a twenty-first-century great, but where does Mr Goodall take his inspiration from? He says it comes from a variety of sources – from written words, to photos and the natural world around him.

“When I read a piece of poetry, see a picture or look at a piece of film that hasn’t already got music to it, I hear music,” he said.

“When I was approached to write this new oratorio, I looked over various sections of the text from the Bible, thought about their meaning, and the music came into my head and I knew how it should sound at once.

“With the piece ‘Shackleton’s Cross’, it was in a picture in a royal collection. The cross, which is down near the South Pole, was in a lovely painting belonging to the Duke of Edinburgh; it was beautiful but also quite haunting and that was where my inspiration came from for that.”

Next on the agenda is a new musical: Mr Goodall is currently collaborating on a stage version of Bend It Like Beckham, which is around halfway complete and expected to be ready for audiences next year. On top of that there is also a commission for Cancer Research UK in conjunction with Classic FM, which is for music to accompany a series of films.