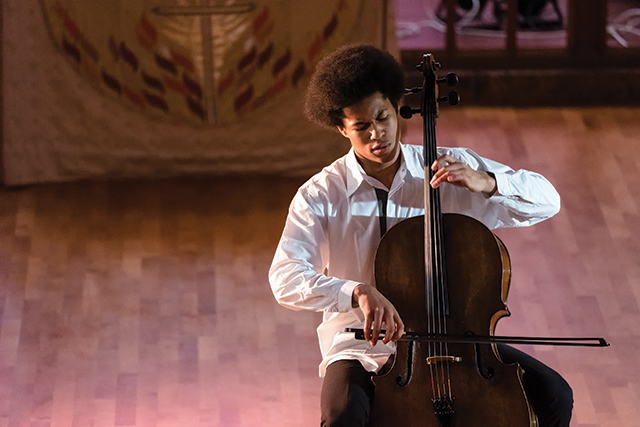 On Saturday 14th April, Grantham Music Club is delighted to present a concert featuring the exceptional young cellist Sheku Kanneh-Mason accompanied on piano by his brilliant elder sister Isata.
Sheku you may remember was the first black winner of BBC Young Musician in 2016, with an electrifying performance at the Barbican Centre of Shostakovich’s Cello Concerto No 1 with the BBC Symphony Orchestra, and is rapidly emerging as ‘the young cellist to watch’. Critics are suggesting already that he could be another Jacqueline du Pré!

Indeed there is a recent quote from the du Pré family: “Jackie would often say ‘So many cellists can play technically well, but can they play music?’ Sheku makes music! He’s the first cellist since Jackie who has that natural and vibrant abandonment when playing. A sheer delight. Jackie would have loved to meet him.’’ (Piers and Hilary du Pré)

Isata progressed through to the piano final in the same competition in 2014. They are members of the remarkable Kanneh-Mason family of seven highly talented musical siblings from Nottingham, ranging in age from Mariatu, 8, to Isata the eldest, 21. The eldest three are now all on degree courses at the Royal Academy of Music, and younger sister Konya has won a place to start in September this year.

Isata won the prestigious Sir Elton John Scholarship to enter RAM, Braimah also won a scholarship to study violin and Sheku joined them in 2017 also with a scholarship. The three of them also regularly perform chamber music as the Kanneh-Mason Piano Trio – they have performed at international music festivals, on TV and radio as well as at venues throughout the country – including Grantham Music Club.

Sheku started to learn cello at age 6. At just 9 years old he passed his Grade 8 with the highest mark in the country and was accepted into the highly regarded Junior section of the Royal Academy of Music held on Saturdays – as were his brothers and sisters. This has meant very early starts every weekend for their parents to get them to London on time over several years – no mean feat!

Since winning BBC Young Musician Sheku has attracted worldwide interest and his high-profile forthcoming engagements include solo appearances with many top international orchestras: The Philharmonia, BBC Symphony Orchestra, Barcelona Symphony Orchestra, The Tonhalle Orchestra Zürich, Los Angeles Chamber Orchestra, and Japan Philharmonic. He returned to The Barbican after winning his title and performed the same concerto with The National Youth Orchestra with Carlos Miguel Prieto. The Guardian wrote that he was ‘technically superb and eloquent in his expressivity, he held the capacity audience spellbound with an interpretation of exceptional authority’. All this and he’s still only 18!

Sheku has a passion to inspire all children to take up classical music, particularly those from black communities, where there seems to be under-representation and he has now been appointed the first London Music Masters Junior Ambassador. He is a member of the recently formed Chineke! Orchestra along with his brother Braimah, and has also performed as cello soloist with them. This orchestra is the brainchild of the renowned double bass player Chi-chi Nwanoko for exceptional black and ethnic minority musicians in the UK and Europe. Last summer Sheku performed as soloist with them at the BBC Proms and also played Haydn’s Cello Concerto with them in a concert at the Royal Festival Hall.

For a top cello soloist, the quality of the instrument is all-important, and as with all stringed instruments it appears that the older Italian ones are the best. Sheku was very kindly loaned an instrument from 1610 made by the Amati brothers for the BBC Young Musician final. One can imagine Sheku’s delight when last year the instrument was bought privately and given to him, on permanent loan, by an extremely generous anonymous donor.

At last year’s BAFTA Awards Sheku performed Leonard Cohen’s Hallelujah with a string trio which brought the audience to its feet and has been viewed by millions worldwide on social media. This tune has been included on his first CD with Decca, Inspiration, recorded with the City of Birmingham Symphony Orchestra. The album includes some of Sheku’s favourite music, which inspired him to take up and keep learning the cello, such as Jacqueline’s Tears (Offenbach), Song of the Birds (Pablo Casals) and No Woman, No Cry by Bob Marley, who is one of his passions. Also on the album is a live version of Shostakovich’s Cello Concerto No 1, which of course is very dear to him. Sheku feels that these tracks and others on the album have all contributed to him becoming the musician he is today. The recording contract with Decca was signed onboard a Nottingham Corporation bus named by the city ‘Sheku Kanneh-Mason’ as a tribute to him. Apparently Sheku was late one morning going to school and arrived at the bus stop just in time to watch his ‘own’ bus pulling out without him!

The eighteen months or so since Sheku’s brilliant performance to win the final of BBC Young Musician has been packed with activity all over the world – but he is the most modest and humble of young men. He still has room in his life for non-musical passions like football – in fact he plays in the Royal Academy team and was particularly delighted when this season they beat the Royal College of Music, their arch-rivals!

The concert in Grantham on Saturday 14th April will be in ChristChurch, Finkin Street at 7.30pm. This is also the venue of the annual Grantham Music Festival where many trophies were won by Sheku and two of his sisters, Konya and Jeneba, between 2011 and 2014.

Tickets are available from the Guildhall Box Office, Tel 01476 406158. This will be a wonderful opportunity to hear an important new musical star in beautiful acoustic surroundings.