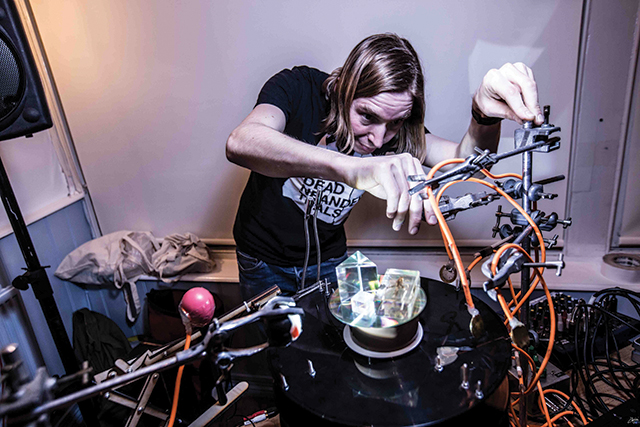 The biennial Sonophilia festival returns to the city this month, bigger and making even more noise in the local community.
If you thought performance art was not for you, then think again. Sonophilia, the biennial Lincoln Festival of Sound and Music returns on 30th September for eight days and there are chances for every member of the community to become involved.

Music performance by headlining artists and bands plays a big part but there are also many hands on and interactive installations with which to dive in and have fun. Many of the events are free but visit the website: www.2016.sonophilia.co.uk to book tickets and for full information.

The festival opens on Friday 30th September with the opportunity for everyone to make a happy noise through the streets of Lincoln by joining The Big Ran Tan starting at Castle Square in front of The Magna Carta at 5pm. There will be a multitude of marvellous musicians, singers and noisiness. You don’t need to be a musician, you don’t need to bring an instrument just go along and soak up the Ran Tan revelry.

Afterwards you can head to the Holiday Inn for 7pm to see a screening of Sonophilia 2014’s ‘Fractal Sparks’, then move on to the Angel Coffee House for 7.45pm where The Ben Havilah Revolution will be taking over to bring you ‘The Angel Revolution’, with guests and friends including Jack & Robbie and Zeph Brown. Bring a bottle and purchase some food if you wish.

Saturday 1st October is Sonophilia Superfolk, a mini festival within a festival, at the Alive Church, Newland with headliners Stick in the Wheel.

A highlight of Sunday 2nd October is the potential world record attempt during Amp Me Live at the Angel Coffee House at 2pm. Anyone with an iPhone or Android can be part of this crowd sourced PA experience. All you need to do is download the Ampme app to take part. Later that evening is a performance by electroacoustic composers CSMA ‘Electromatronic’ and a Magna Jam at the Magna Carta.

Monday 3rd October sees an Open Mic Night at the Lion and Snake while the next day the University of Lincoln and St Mary le Wigford Church will host Extra Sonic Practice (ESP), a group of scholars and artists from the University of Lincoln who work with sound in multiple contexts and configurations. Go along to Hot at The Joiners on 5th October to experience some hot jazz from the swing era and beyond.

The last two days of Sonophilia culminate with a conference held at Alive Church, Newland. Day one will focus on music and language while day two will explore art, education and activism. Both evenings have a packed programme of performances and events with Bards in the Bar at the Rogue Saint, followed by Weird Garden at the Decimal Place Gallery on Burton Road on Thursday 6th, while Friday 7th sees the grand finale, Sonophilia Goes Loopy, at Lincoln Drill Hall, with performances from seven acts from 5pm to 11pm, climaxing with the legendary Coldcut!

Throughout the festival there will be ongoing sound art installations across the city. Reading the Water, created by Brighton-based artist Julian Weaver, created for the Highbridge area of the High Street, delves into Lincoln’s innermost places – the waterways, wells and pools which interact with the city and its people through the centuries.

A Headphone Installation Trail of popular listening posts located around Lincoln’s heart, will include cafes, The Central Library and the Drill Hall’s public lavatories. All of these places will come alive with sound as Sonophilia presents work from a selection of renowned artists.

UK artist Janis Bowley brings the conceptual Silent Spaces Project to Lincoln to be launched during Sonophilia. The project offers visitors a self-guided tour of some of Lincoln’s acoustically interesting ‘silent’ spaces, encouraging you to explore and enjoy the sites sonically and discover corners of Lincoln you may not have experienced before.

Sonophilia Festival of Sound and Music runs from 30th September to 7th October. Visit: 2016.sonophilia.co.uk for full programme detail and to book tickets.

INSPIRED BY SOUND
The sound artist and creative producer whose passion for music, sound and joyful noisiness has created the Sonophilia festival is Amie Slavin. Amie was born in Lincoln and, having grown up all over England, has lived in the city since 1999.

Amie was partially sighted up to the age of twenty-three, when unsuccessful eye surgery took what remained of her eyesight. Amie had graduated with a degree in Equine Business Management but following this life-changing experience she turned to her love of the arts. Her work as an installation sound artist has evolved through sound design and the joy of sharing the delivery of other people’s work. Amie has also used her knowledge of sound and its impacts in her counselling work and studies.

“I owe my career as an artist to the Arts Council,” said Amie. “They have believed and invested in my work over the last ten years, including ‘Other Ranks’, a major installation focusing on the Army and combat veterans, and SoundSpiral, an inflatable venue with fifty-two speakers embedded, which was created as part of the Cultural Olympiad and was awarded the London 2012 Inspire Mark.”

The Arts Council was also the main funding body behind the first Sonophilia festival in 2014 and is providing funding support again this year.

“This year we have been able to double the duration of the festival from four to eight days and with the support of sponsors and patrons such as Jim Broadbent, Robert Wyatt and the Lincoln Cultural Arts Partnership there are nationally known headline artists and musicians appearing. I am delighted that the festival is gaining this momentum.”

Amie has other exciting plans this autumn, when she begins an MSc in War and Psychiatry at Kings’ College, London.

“I want to build on my creative work with combat veterans to contribute therapeutically to supporting those who suffer with Post-traumatic stress disorder. This will probably culminate in a major work to coincide with the centenary of the end of World War One in 2018.”