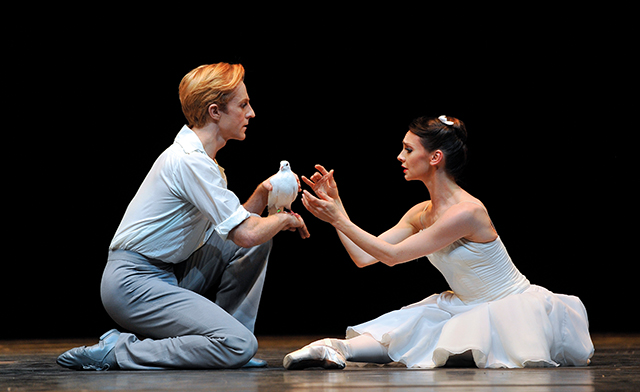 Lincoln born Elizabeth Harrod pursued her passion for dancing from a young age, becoming a soloist of the Royal Ballet. The mother of three tells Joy Sable how she balances family life and her dedication to her training, as she prepares to return to the stage.

Elizabeth Harrod is sitting in a hospitality room at the Royal Opera House, sipping a drink and clutching a tissue. Nursing an endless cold is one of the perils of having young children, and now with three aged five, three and just a few months, she is rapidly adapting to little sleep and permanent sniffles. Even sleepless nights cannot detract from the beauty of her large, expressive eyes and sunny smile.

Elizabeth is unique among ballet dancers: she is returning to the stage as a Royal Ballet soloist after the birth of her third child. While many dancers have made a comeback after one or even two pregnancies, it is highly unusual to do it for a third time. It takes talent, plus a lot of determination, to get what footballers would call “match fit”. This focus was apparent from quite an early age, even if she began ballet classes because she just wanted to dress up.

“I started ballet when I was six,” says Elizabeth. “I had a friend who had a lovely little pink leotard with a skirt attached, and I just wanted one.” Born in Lincoln, Elizabeth is now based in London as the impressive Royal Opera House is her place of work, but she tries to get back to Lincolnshire whenever she can.

“I have a lot of family in the surrounding areas, so it is very close to my heart. My grandparents lived in a tiny little village called Billinghay, which is very remote, very quiet, and those are my fondest memories. My aunt and uncle live in Sleaford, so that area is very familiar to me.”

Her first classes were in a local British Legion hall, run by the Skelton Hooper School of Dance. “I had wonderful teachers. They just mentioned to my parents one day that they thought I was quite talented and maybe I would like to audition for the Royal Ballet Junior Associates programme. [Junior Associates – or ‘JAs’ as they are known, are children who take classes linked to the Royal Ballet School, in addition to their regular ballet classes. These lessons prepare pupils to audition for White Lodge, the junior section of the school, which is in Richmond Park, London.]

“At the time it was only held once a month in Leeds. Off I trotted and did the audition when I was seven, and I started there when I was eight. From there it was the natural assumption that I might audition for White Lodge.”

She passed the audition, which meant leaving home to live and study at the famous boarding school. “I think it is only in hindsight now that I realise what a wrench it must have been for my parents. Selfishly at the time, I focussed on the wrench it was for me. I was only 11 and I was desperately homesick. I can’t remember a day when I didn’t sob, but it was purely my own choice to be there. Every single time I spoke to them [on the phone] they said, ‘We’ll get in the car right now and come and get you if you want us to’, and then at the end of the conversation, no matter how much I cried I said, no, I’m going to stay. So I was obviously determined.

“I was never one of those children who had a bedroom full of posters of dancers, but being at White Lodge opened my eyes. Prior to going there, my ballet knowledge was virtually zero. I had no knowledge of where ballet could take me as a career. It took so much work. There was a subconscious part of me that was obviously making that decision to say this is where I was going, and then the physical part of me was just grafting day by day to make it happen.”

Elizabeth was particularly inspired by the Australian-born ballerina, Leanne Benjamin, who was a Principal with the Royal Ballet for twenty years. “This tiny little person had, to me, the strength of ten men. Ballet is such a beautiful, graceful art form, but then the strength that it takes is really to be admired. That was a turning point for me, realising that it wasn’t all just dressing up!”

Whilst at the Royal Ballet School, Elizabeth also developed a friendship with another Australian – Steven McRae. Upon graduating from the school, Steven was taken straight into the Royal Ballet Company at Covent Garden, where he is now a Principal, while Elizabeth went to dance with the Norwegian National Ballet for three years.

“It was fantastic, it was a lovely company. I had a great experience, with a lovely variety of repertoire.” Even the language barrier did not cause a problem, though she did pick up a few vital phrases. “My meagre attempts at speaking Norwegian were always met with an English response.”

However, she did miss Steven and wanted to return. “It took me leaving the country to realise just how fond of each other we were! I realised that I missed London a lot. It seemed the time of my life to work as hard as possible and I remember thinking, if I don’t get the experience now, I’m going to miss it.”

She and Steven married in 2011 and now they are the proud parents of Audrey, Frederick and Rupert. There is amazing footage on YouTube of Elizabeth taking class – that rigorous daily workout so necessary for dancers to keep in shape – with her large pregnancy bumps.

“I spoke to my midwife and GP and they agreed that as long as I was comfortable. they really trusted my professional experience and my own knowledge about my body. I remember someone – a health professional – said to me, ‘You have to remember, what is normal to you is not normal to someone else.’ So being young and fit I continued doing what my body has done for as long as I can remember, since I was six years old.

I didn’t exert myself. Legs became lower, and I generally did everything but at a greatly reduced level. I continued pointe work until I was about seven months pregnant.”

Now Elizabeth is back from maternity leave and making slow but steady steps towards dancing again. “I’m starting with pilates, some strength training and a bit of low level cardio, and over the next few weeks I will get back at the barre and continue to progress until I’m back on stage.”

It does help that ballet companies are now much more geared towards helping mothers return to work, with pilates studios, gyms and physiotherapists on hand. “Our support network has increased and improved.

Science and knowledge have allowed us to do this. Our fitness experts are incredible and that allows us to know that we are in good hands during pregnancy and when we return.”

Elizabeth has had her fair share of injuries during her career, including problems with her Achilles tendon and back issues. “I’ve had several stress fractures in my lower spine but it has been something I’ve learned to work with. You become stronger and you develop new ways of how to perform.”

When she eventually retires, she is contemplating working in the health and wellbeing field, or coaching younger dancers. “I realise what a wonderful life ballet has given me, but it also comes with immense stresses and strains physically and mentally. Your health and wellbeing can also take a hit if you’re not able to really keep a level head on things. I’m very interested in the next chapter.”

In the meantime, she will be working hard to get back into those tight tutus, ready to reap the benefits of years of dedication. “Those highs that you feel are so high, emotionally it is incredibly rewarding.”