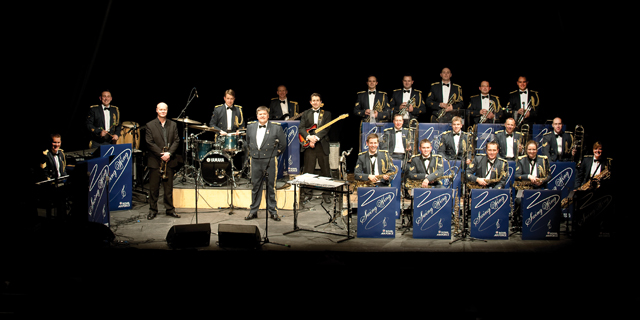 Swing is in the air!

The RAF Swing Wing Band is one of many groups and ensembles forming part of the Band of the Royal Air Force College, travelling from their Cranwell base to give concerts in aid of charity. Jean Rush saw them in action and looks back on the history of RAF music
The RAF Music Service has a fascinating history. It can trace its origins back to 1918 when the first bands were formed by Dr Walford Davies, composer of the RAF March Past, who later became Master of the King’s Music. At that time Cranwell was the base of the Royal Naval Air Service Training Establishment (HMS Daedalus). In 1918 the RNAS became part of the newly formed Royal Air Force, and on 5th February 1920 Cranwell was formally accepted into the Royal Air Force, a date celebrated annually as Founder’s Day, and flying training continued along with a volunteer brass brand and an orchestra. The Band of the Royal Air Force College was established two months later and began its life with twenty-five musicians, formed principally to support College functions, although they toured seaside resorts giving public concerts in the summer months. When World War Two began in 1939 the band was playing on Plymouth Hoe, and its role changed to provide entertainment for all the RAF bases in northern England, as well as frequent detachments to London where they undertook morale boosting marches through recently bombed areas.

In 1990 the Royal Air Force became the first service to recruit women into mixed bands, and women now form a significant proportion of the personnel. Today the Band of the Royal Air Force College has forty musicians and has many small groups and ensembles within its ranks. These include the Swing Wing Band, an eighteen piece Big Band ensemble assembled to carry on the legacy and traditions of great swing and dance music, left to the RAF by the legendary Squadronaires. Bandmaster of the Band of the Royal Air Force College and Leader of the Swing Wing Band is Warrant Officer Gary Stevens. Formed in 1989, the band appears all over the UK, in venues ranging from theatres, concert halls and aircraft hangars to the twelfth-century Pickering Castle. Its concerts conjure up a golden age, with music immortalised by the orchestras of Tommy Dorsey, Glen Miller, Count Basie and others.

Another ensemble from the Band of the Royal Air Force College is the RAF Blue Belles, an Andrews Sisters style vocal group formed in 2010. They have become a regular attraction with the Swing Wing concerts and in 2012 had the thrill of performing the Glen Miller classic ‘Serenade in Blue’ with top UK vocalist, Matthew Ford, at the band’s Help for Heroes concert at the South Holland Centre, Spalding. The concert was such a success that they agreed to come back this year, to do two concerts, on 14th and 15th February. Matthew Ford, famous for his appearances at the Royal Albert Hall Proms in some of the most popular concerts, featuring numbers from films and musicals, also agreed to come back for this unforgettable event. At this year’s concert regular Blue Belles, Tracey Hodgetts and Cara Palmer were joined by Beth Charlton, a relative newcomer to the group. All three Blue Belles are career musicians and their regular membership of the band is as instrumentalists – Cara plays the French horn, Beth the euphonium, and Tracey the baritone sax. I talked to Tracey during the band’s rehearsal at the South Holland Centre, where she was doubling up by playing her sax during the concert between singing numbers with the other Belles. Tracey told me that she has been in the RAF for five years and loves her work, although she says the full-length blue skirts which are part of their uniform are rather warm when on deployment in Cyprus! She studied music from childhood, but it was seeing an RAF band perform in Telford some years ago that decided her chosen career and she now has a degree in jazz music from Leeds College of Music. At this year’s concert, the Belles sang several numbers, but a highlight for Cara and for the audience was the duet ‘Can’t Take That Away from Me’ which she sang with Matt Ford.

From the start, the ebullient Gary Stevens gets the audience and players into the right mood with some lighthearted patter, but there’s no mistaking that he and his bandsmen are highly professional musicians. At the same time they all seem to be great friends, enjoying their performance as much as the audience. Although his CV shows an academic background, Gary is a great showman, and says it’s important to lose his inhibitions when performing with the Swing Wing Band. At the time I talked to him he was in the middle of rehearsals for a completely different type of concert, in Lincoln Cathedral. Gary joined the RAF in 1977 and his varied career has included two years with the Band of the Royal Air Force in Germany. All RAF musicians also have an operational role, traditionally assisting with the provision of medical support in times of crisis and war. The bands undertake regular overseas tours, including Cyprus, the Falkland Islands and mainland Europe, providing musical support for personnel stationed overseas, or to support UK troops on operations.

This year’s concerts at the South Holland Centre were made especially memorable by the return of the fabulous Matthew Ford, who seems to have formed a natural bond with the Swing Wing players. This year Matt sang ten numbers, the highlight for me being ‘Brazil’, and of course his duet with Blue Belle, Cara. Another great moment was Band Sergeant Rob Scullion’s trumpet solo ‘Lush Life’, but every single item on the programme was a joy.

The event was, as usual, organised by councillor Graham Dark in aid of the Help for Heroes charity, and the total he has so far raised for the charity amounts to some £20,000. Graham said: “All tickets were sold out soon after going on sale, and my target for Help for Heroes was achieved well before the event. At first, following on from the £5,220 and £5,063 raised at the previous two concerts, the £9,000 target I set for the two days this year seemed a bit ambitious. However, it soon became obvious that the respect and high regard in which our servicemen and women are held prompted immediate support for this worthy cause. The RAF Swing Wing’s music programme is always a band enthusiast’s dream, and again the appearance of the UK’s most outstanding big band singer, Matthew Ford, made the concerts even more memorable.”

The Band of the Royal Air Force Regiment is giving a charity concert at the Drill Hall, Lincoln on 11th April. Box Office 01522 873894.

Every spring, autumn and Christmas, either the Band of the Royal Air Force College or the Band of the Royal Air Force Regiment give station charity concerts in their home venue of the Whittle Hall, in the grounds of the historic Royal Air Force College building in Cranwell. Both bands perform music of all genres – the Whittle Hall concerts are famous for providing a varied and entertaining evening and are always a sellout. The two bands alternate for the spring and autumn series of concerts, but the five Christmas performances are generally a shared commitment. The concerts are in aid of the RAF Charitable Trust and the spring dates are 17th to 19th April. To apply for tickets phone 01400 267562 or email: whittlehallconcerts@hotmail.co.uk.