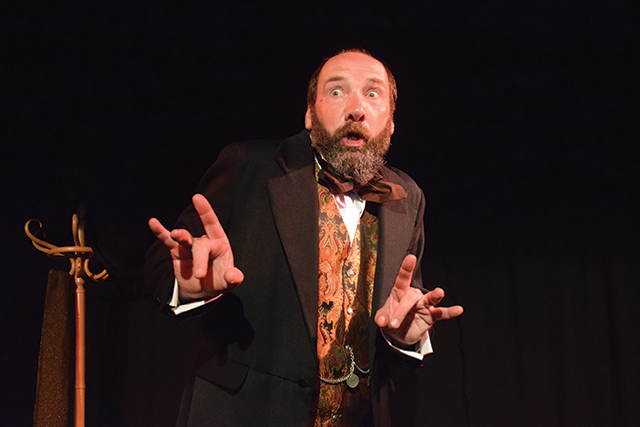 The Deepings Literary Festival – Enter the world of wordcraft!

After the last books went back on their shelves and the last bow was tied on the special boxes of Deeping Fudge for authors at the first Deepings Literary Festival in 2017, one thing was clear…
There was an audience whose appetite had been whetted and was ready for another! And what a festival the Deepings is planning for this year with the support of South Kesteven District Council. Running from 23rd-26th May, it’s a bigger, more diverse event to please all comers – including the odd glass of prosecco!

It was obvious that the unique blend of food, music and words characterising the first literary festival played a key part in its success. In fact it was what festival-goers loved!

Following in that vein, million-selling author Cathy Bramley, whose romcoms are set in idyllic rural locations, is inviting readers for canapés and prosecco at Driftwood, the award-winning bistro in Deeping St James. Then it’s afternoon tea at Lilli’s Tearoom and Cakery in a scene redolent of her Lemon Tree Café.

Carol Drinkwater continues the theme – flying in from her home in France to regale her audience with tales of All Creatures Great and Small and the twenty-four books she has subsequently penned. That includes a quartet of memoirs set on her olive farm, to The Lost Girl published in 2017.

She will be accompanied by the Herbie Lamb Quartet, a jazz band whose sultry tones and songs from the Great American Songbook will complete a Sunday Brunch experience set in an oak framed building in the Granary Gardens at West Deeping. Grasmere Farm butchers will provide bacon butties and lashings of orange juice.

The Granary at West Deeping also hosts a question and answer session with Susie Boyt, author of My Judy Garland Life, which was shortlisted for the PEN Ackerley Prize. She writes about art, life and fashion for the Financial Times and is the daughter of Lucien Freud and great-granddaughter of Sigmund Freud.

Artist Nicholas Tearle joins poet Becky Owen-Fisher at a poetry reading and art exhibition also at the Granary, to share their love of the Fenland landscape. Their book Standing High Out of Shrunken Peat will be discussed, and readers can tuck into bowls of strawberries and cream.

The Coronation Hall in Market Deeping is Saturday’s festival heart, when a trio of authors will take to the stage, with coffee and cake provided by local Macmillan fundraisers, Pete and Di Wheatley.

Barnsley lass and Sunday Times bestselling author Milly Johnson will open proceedings, fresh from the previous evening where she appears at the River Restaurant and entertains diners over a fish and chip meal.

She is followed by Barbara Copperthwaite, Lincolnshire-raised author of psychological crime thrillers. The haunting atmosphere of the Fens filters into much of her writing.

Elly Griffiths, author of the Ruth Galloway Mysteries, set in neighbouring Norfolk, and The Stranger Diaries – The Times Crime Book of the Year 2018 – completes the afternoon.

International bestselling crime fiction writer Sophie Hannah will be at the Priory Church Deeping St James, where her natural ebullience combined with a dry sense of humour will leave festival goers wanting more.

To the strains of music provided by resident musicians Fresh Ayre, she examines the concept of the Grudge as laid out in her book How to Hold a Grudge. Her audience will go away armed with the skill of how to grade one!

With close links to Helpston poet John Clare, who used to come and buy his stationery in Market Deeping, it is fitting that the Literary Festival will be kicked off by author Judith Allnatt. Her novel The Poet’s Wife – based on Clare’s family – was shortlisted for the East Midlands Book Award.

Join her at the Deepings Library, one of the busiest community libraries in Lincolnshire, following a successful three-year battle to save it from closure. Judith will be followed by Guinevere Glasfurd-Brown whose first novel, The Words in My Hand, was shortlisted for the Costa First Novel award.

The Library also stages a very successful afternoon event, a ‘read dating’ event – launched at the first festival and giving a chance for local authors to showcase their work.

One of the area’s newest coffee shops, Godsey Coffee, is opening its doors to Lucien Young, a former member of Footlights while reading English at Cambridge University. He is the author of Alice in Brexitland, Trump’s Christmas Carol and The Secret Diary of Jeremy Corbyn.

Coffee and pastries will also be on the menu when crime writer Darren O’Sullivan is in conversation with million-copy author Louise Jensen at The Stage in the centre of the market place.

The University of Cambridge will be represented by Dr Patricia Fara, a lecturer in History and the Philosophy of Science, who will be talking about her book A Lab of One’s Own: Science and Suffrage in the First World War in an appropriate venue: the newly built Science Lab at the Deepings School.

In a festival of coups, perhaps the greatest of all is to have none other than Gerald Dickens, the great-great-grandson of the literary giant Charles Dickens, performing at the Deepings School. In a sensational evening of words, he will be joined by talented musicians and songwriters, the Bookshop Band.

The school will be transformed for a star-studded gala dinner with John Sergeant, entertaining guests with tales of his successful career as an author and journalist.

It takes endurance to keep up with the festival programme, not a problem for one of the world’s most inspirational distance runners, Mimi Anderson, who will be talking about her book Beyond Impossible at the Spinroom Studio.

Best-selling historical fiction author Simon Scarrow lends serious weight to the festival on Sunday afternoon at the Coronation Hall. His many successful books include his Eagles of the Empire novels featuring Roman soldiers Macro and Cato.

Later that afternoon indie authors Julie Stock and Lizzie Lamb talk about their books and experiences over coffee and apple pie, reflecting the atmosphere created in Julie’s debut novel From Here to Nashville.

Poet John Betjeman will be honoured when Greg Morse, author of John Betjeman: Reading the Victorians, recounts tales of his books on the railway industry and his enduring romance with trains.

Young minds are not forgotten as festival organisers – backed with local sponsorship and supported by SKDC – are sending an army of the library’s best storytellers into local primary schools.

Much-loved children’s author Cathy Cassidy will be playing to a packed house of the community’s Year 6 children. Authors Ali Sparkes, Tom Palmer, Holly Smaile and Mark Grist will be at the Deepings School together with Ben Crystal – actor, author and Shakespeare specialist.

So, the literary grandmasters of English literature – Shakespeare, Dickens, Clare and Betjeman – will join those of the 21st century in The Deepings to ensure that the festival carves out a special niche for this southernmost corner of the county.