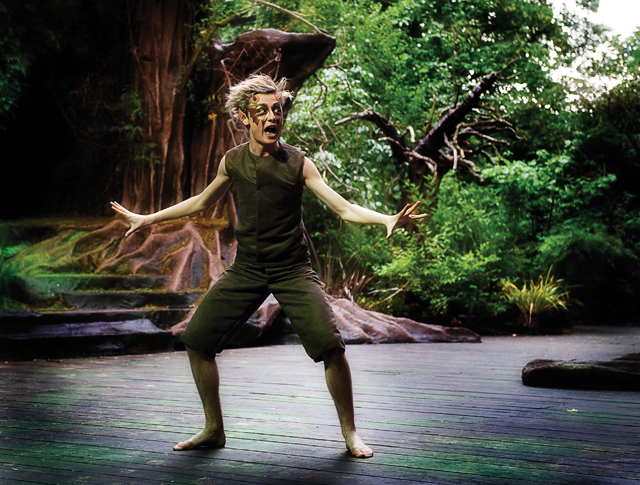 I have spent many happy evenings at Tolethorpe Hall, picnicking in the sunshine whilst looking forward to a night watching the Stamford Shakespeare Company giving one of their brilliant performances.
I had always wondered about the history of this beautiful place and how it became the home of the Stamford Shakespeare Company and when I started to find out about it I was amazed.

More than 1,000 years of history make it a very special place indeed. Owned by only four families between 1086 and 1967 its story makes fascinating reading. Toli the Dane was the first inhabitant of the site and it became known as Toli’s Thorpe, which later became Tolethorpe. In 1086 a Norman family arrived and took the name de Tolethorpe and it is believed that they built a manor house on the site of the present building.

In 1999 an ochre wall painting was discovered during restoration work. After being cleaned it was examined and thought to date back to the thirteenth century, which links it to the Norman family. It included three drawings of the fleur-de-lys which were the royal arms of France in medieval times.

In 1316 Matilda de Tolethorpe, a member of the Norman family, married Sir Nicholas Burton who was a knight of the Shire of Rutland and represented the county in early parliaments. The Burtons went on to live at Tolethorpe for the next 200 years. One of the family was a standard bearer in the army of Henry VI and others also served their country in France. In 1503 the Tolethorpe estate was purchased by Christopher Browne whose uncle was William Browne, a wealthy wool merchant who built Brownes Hospital in Broad Street, Stamford for the care of the elderly and infirm. The Brownes lived at Tolethorpe for the next 300 years, counting amongst their members high sheriffs and members of parliament.

Robert Browne must be the most well-known member of the family. He spoke out about religion and was well known as the founder of a separatist movement called the Brownists and the Pilgrim Fathers were amongst his followers. He believed that the church should be separate from state control and that the congregation should have more say in the running of the church. The Brownist movement was so well known that Shakespeare referred to them in Twelfth Night, when Sir Andrew Aguecheek says: ‘I had have lief be a Brownist as a politician,’ and an American author, Mary Caroline Crawford wrote that it is to ‘Browne and Brownism that the seeds of modern democracy as we know it today in America can most directly be traced.’ His views were always getting him in trouble and on many occasions his cousin, Lord Burghley used his influence to get him out of prison, but to no avail in the end as he died in prison at the age of eighty.

In 1751 Francis Browne died childless and the estate passed to his sister, who had to leave the estate because of financial problems and it was eventually sold to Lord Chesham. There are no known descendents of the Browne family in this country but there are several American families descended from them who were amongst the pioneer settlers in the 1630s.

In 1864, the Tolethorpe Estate was bought by Charles Ormiston Eaton, who was a prominent Stamford banker. Between 1864 and 1867 he carried out a major reconstruction of the hall and the formal gardens were laid out pretty much to the design they have today. In the 1920s most of the estate was rented out to local farmers and the hall was rented out to the Burnaby-Atkins family who remained its tenants until 1967.

Andrew Burnaby-Atkins, after distinguished service in the Second World War, became aide de camp to Field Marshall Lord Montgomery who visited Tolethorpe on one of his journeys north. On this occasion the villagers of Little Casterton came out to give him a wave and a cheer. In 1967 the Eaton family sold Tolethorpe Hall and its remaining sixty-eight-acre estate to a Cambridgeshire farmer. The estate was then split up and sold off in lots. After this, the hall and its grounds were neglected for over ten years. However, the Stamford Shakespeare Company came to its rescue in 1977 and began its restoration.

Stamford Shakespeare Company started out as an amateur company founded in 1968 by Jean Harley who, with a group of local actors, performed an open air production of A Midsummer Night’s Dream in the monastery garden of the George Hotel in Stamford. Three years later it was decided that the group should become independent and it was officially named the Stamford Shakespeare Company. The company continued putting on plays at the George Hotel for another six years until it could not be accommodated there any longer, because of the building of a new car park. A search was begun to find a suitable venue to put on open air plays. A few months after the search began Tolethorpe Hall came onto the market in a near derelict state. It was found to be a perfect place, having a natural amphitheatre in the grounds. The company had certainly not got enough money to buy it but with the help of a generous private loan, which was later repaid, it was able to go ahead with its plans.

The first season opened in May 1977 with performances of Macbeth and The Taming of the Shrew. After nine years of performing mainly to local audiences it was decided that in order to keep up with the costs of maintaining and restoring the Hall it was necessary to make more money by attracting bigger audiences and putting on more performances. To do this, a marketing campaign was launched and publicity was extended to a much larger area. This worked brilliantly and with the help of a National Lottery Grant the Stamford Shakespeare Company at Tolethorpe has gone from strength to strength.

The canvas canopy which protected the audience from inclement weather was replaced in 1993 by a permanent high-tensile canopy made from a similar material to that of the Millennium Dome. While this was being done the seating capacity was increased from 450 to 600. In 1998 an Orangery extension was built onto the Hall so that visitors could shelter there on rainy evenings or have a coffee in the interval. It is also used by the Tolethorpe Youth Drama Group on Saturdays. Other interesting touches have been added, such as the tapestry of hollyhocks designed and made by the internationally known knitwear designer Kaffe Fassett, which hangs in the Orangery, and two stained glass windows in the bar depicting scenes from eight Shakespeare plays. This year the Company is putting on As You Like It, The Taming of the Shrew and Alice in Wonderland and Through the Looking Glass. You can either take your own picnic, order a ready prepared picnic for when you arrive, or eat in the restaurant in the Hall before the performance. Whatever choice you make, you are sure to have a magical evening. For more details go to www.stamfordshakespeare.co.uk.