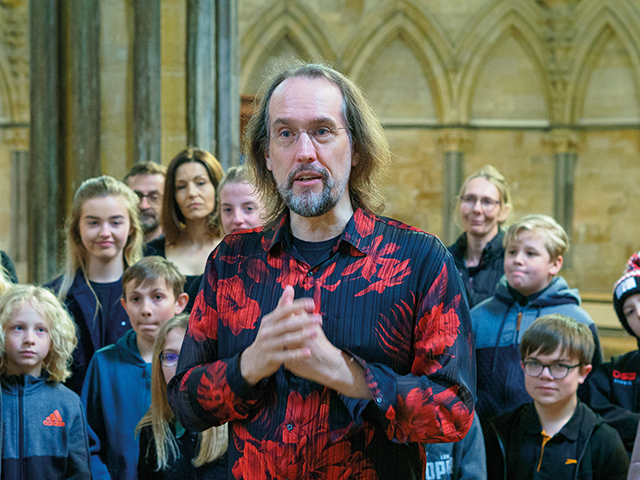 The man with the energy to create spectacle

Ben Poole and The Starring Lincoln Theatre Company’s latest production, Oliver! opens at Lincoln Cathedral on 5th August. Caroline Bingham chatted with Ben during a rehearsal break.
Anyone who witnessed Ben’s first two productions in the Cathedral, Jesus Christ Superstar in 2015 and 2016 and Jekyll and Hyde in 2017 will still recall, as I do, the powerful and breathtaking productions delivered by this community theatre group; a largely voluntary company drawing on the city’s human talent and its finest architectural resource to create music and theatre of an exhilarating standard. Ben gave outstanding lead performances in the title roles for both these productions. The procession of the cast and audience through the East door onto the Cathedral Green singing the title music as a finale to each night was moving and magical.

“Working in the Nave of one of the UK’s most beautiful medieval buildings is a unique privilege,” said Ben. “The Cathedral is at the heart of Lincoln and to be able to bring the dynamism and energy which I feel in the city into this space with these performances is a powerful responsibility. This is also the community making a financial contribution to support one of our greatest historic treasures.”

As producer, director and leading actor in these productions Ben admits that after Jekyll and Hyde he was exhausted. “It does take a great deal of energy to create these theatrical spectacles, not just mine but also other members of the company and most of us have day jobs too.”

Ben is director of Imperial Teas based on Steep Hill, a musician and in demand as a director for other companies. His career has taken him to London and abroad but Lincoln, his home city, has always drawn him back. “It is the community and connections here, which today you also see in the success of Lincoln City and the University. It is about creating a sense of oneness and the shared experience in society.”

Ben has also appeared in the Lincoln Mystery Plays and in his youth was part of the company from Bishop Grosseteste who staged Joseph and the Amazing Technicolor Dreamcoat in the Cathedral. As the city has grown so have Ben’s ambitions for Starring Lincoln and the scale of the productions it can deliver. “I see these shows as a role model for other communities but also a legacy for my city. Whether that is inspiring new talent or building lasting friendships, we are capturing some of the vibrancy and buzz of Lincoln and recreating it on stage.”

The casting for Oliver! began with an open invitation for locals to come and be part of the production. With the auditions seeking a final cast of nearly 200, Ben was looking for amateur but enthusiastic singers and actors, who had the potential to give professional performances. “I aim to build a belief in each person that they can go beyond their ability. I can teach technique while directing but it is also about building a critical mass in the belief of the company’s performance. I see that in moments initially which you know will be spine tingling, which then builds in continuity.

“Oliver! the musical has the ‘good old knees up’ legacy of the Lionel Bart Broadway production and 1968 film, but many of the themes and certainly those central to Charles Dickens’ novel have as much resonance today as they did in the Victorian era.”

For the first time the audience for Oliver! will be in the round – or rather rectangle – in the Nave. With raked seating it will be an immersive experience only feet away from the action on an elongated period street scene. “I have definitely leaned more towards the novel for inspiration and yes, this will be a darker version of the musical than some will recall. The lack and poverty of opportunity which children experience in the storyline, the band of pickpockets who have a parallel with present day urban gang identity; modern day slavery; domestic abuse; anti-Semitism; crime and punishment are some of the themes which are interwoven. We can take fundamental messages from this story that without a sense of community and sense of oneness society becomes feral and breaks down. There is a kindness and generosity of the performance which is shared with the audience; making those connections and learning from one generation to another are part of a vibrant community.”

Ben will play Fagin for every performance while other roles are shared, especially the lead characters for younger cast members. There are two Nancys: Emily Norton, who in her day job is a reporter for the Lincolnite, and Rihanna Trueman from Grantham. Four youngsters will share the role of Oliver: Abbie Andrew-Carbry; Oliver Hetherington-Field; Kieran Styles and Noah Clark. And there are four Artful Dodgers: Anais Marks, Joseph Grattage, Guy McMillan and Beatrice Sanford-Casey.

“I think I would describe the set as a Ben-Hur street scene within an amphitheatre setting so the audience will feel very connected to the action. I have already had those ‘hairs on the back of my neck’ moments in rehearsals listening to ‘As Long As He Needs Me’, and ‘Where Is Love?’ being sung. It is so exciting and energising seeing these performers grow and I know they will shine in the magnificent setting of the Cathedral.”

Oliver! will run from 5th to 10th August and 12th to 16th August at Lincoln Cathedral. Tickets are still available from: www.lincolncathedral.com, Tel: 01522 561658 or visit the Cathedral Shop.