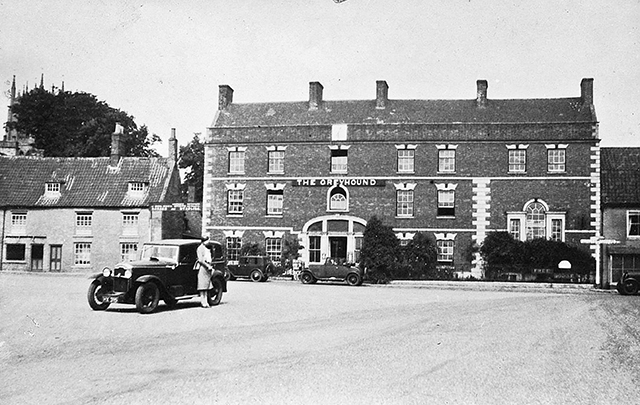 A new book charts the changing fortunes of Folkingham from the Anglo-Saxon period to the present day. Yusef Sayed spoke with the author recently, to learn more about the history of the former town and why it deserves closer attention.

Written by village resident Martin R Smith, a specialist in local history and architecture, Folkingham – The Reluctant Town seeks to make 1,500 years of history newly accessible – the only previous book on the subject being unavailable for many years.

Based on detailed primary research and with the support of subscribers, the publication is available in an elegantly produced, limited edition hardcover version supplemented by a wealth of photos, maps and diagrams. A concise, online resource has also been set up to complement the print edition.

“That was part of working with the Folkingham Past and Present History Group,” explains Martin.

“They asked me to develop a site. I put up the basic story of the book there for free, so anybody can access it. But if you want to delve in a bit deeper you can get the book.

“I wanted to produce something that would last. The book is litho printed in England, sewn in sections and hardbound with marbled endpapers as seen in old books.”

Having previously worked for Stamford Museum, publishing several titles focusing on the town, the new book is a passion project, developed alongside Martin’s current job providing careers support for a national arts college.

“It’s taken me about four years,” he says.

“As I work full-time it’s a balance of fitting it around that and my family. It’s a matter of looking at the local archives and seeing what material is there. A lot of it is primary stuff. There’s some secondary material, such as a book published in 1991, by LR Cryer, on Folkingham – going to that as an initial source was quite useful. But that’s out of print now, virtually impossible to find, which is another reason why I was interested in doing the book because you just couldn’t find any local history of the place.

“One of the first things I did when I came here was I joined the local history group. And you’ve got there a really good core group of people interested in the heritage and history of the place. That was a great introduction. And they’ve got an archive of material that I could delve into, which was really useful. And from that you start to get contacts and talk to people.”

Those familiar with Folkingham’s spacious Market Place and handsome Georgian architecture – arranged prominently on a slope along the A15, under the gaze of the church tower of St Andrew’s – nevertheless probably pass through unaware of its prosperity during the medieval period, its status as a royal borough, its castle, the once bustling atmosphere as a staging post for coaches, and its aristocratic associations. It was even home to one of the country’s finest singer-songwriters for a few years.

Martin says: “Because it’s a very distinctive place, I think a lot of people know about it. It captures your attention as you drive through on the A15 – and that’s how I came across it, driving up from Stamford and suddenly you’re in this Georgian market place in the middle of nowhere and you think, why is this here?

“And I suppose when we moved here, that’s the question I wanted to ask myself. What’s the reason to have this very unusual former market town but on a very small scale, isolated now between Bourne and Sleaford? That’s what I wanted to explore really.”

While designated among the first conservation areas in the UK, there are now few amenities and only a small population. The Landmark Trust acquired the gatehouse of the local House of Correction in 1982 but many of the prominent landmarks have either disappeared, like the castle, or fallen into other uses, such as the former Greyhound, now apartments.

Despite the dramatic contrasts with previous time periods, Martin argues that Folkingham’s story deserves to be better known, and the book is part of recent initiatives to bring more visitors to the village.

“Part of it was getting an archive of all the old images. And the other thing I wanted to do was have good captions. So all the way through you’ve got detailed captions and you can actually get quite a lot of the story from those. I realise very few people are going to sit down and read it end to end. You dip into things. It’s divided into lots of little sections. It’s enjoyable in whatever way you want to read it.”

Beginning in the Anglo-Saxon period, Folkingham was a ‘soke centre’, administering justice and receiving fees as a royal estate. Following the Norman Conquest, ownership of the land was passed down through a number of prominent dynasties associated with the Crown, including that of Henry Beaumont, before the cessation of the Crown’s interest during the Commonwealth. In the Georgian age, the Heathcote family represented ‘new money’ and there were attempts to bring more prosperity to the town – but Folkingham’s fortunes were ultimately diminished in the Victorian period as the railways bypassed the area.

Remaining attractive to many for the popular fair at Stow Green and later the Belvoir Hunt – re-established in 1894 to celebrate the homecoming of Thomas A R Heathcote and his bride – the age of the motor car and mechanised agriculture meant that Folkingham became increasingly peripheral, with people drawn to bigger neighbouring towns and cities for work and leisure.

While the RAF and BRM Racing found the location ideal for testing the most cutting-edge engineering in the twentieth century, by 1981 most trade had ceased, the well-known Greyhound inn was empty, the Wesleyan chapel shut and the school pupils moved to nearby Pointon.

As well as charting in detail the changing appearance and importance of Folkingham’s prominent buildings over the centuries, and the wealthy families whose interests were connected to the location for many years, Martin also highlights some more recent but no less notable residents. Author Colin Watson, acclaimed for his Flaxborough Chronicles, spent his final years in the town and the folk singer-songwriter Roy Harper – to whom Led Zeppelin dedicated one of their songs – lived in the Market Place in the late 1980s and recorded two albums in his home studio.

“Sometimes you just come across material completely at random,” says Martin. “Somebody might just post an old photograph of the place up on eBay. So it’s also keeping a trawl out on the internet for things as well.”

Martin believes that a Neighbourhood Plan would serve to improve the design and planning of the community while protecting its historical setting. Later this year, Folkingham will host a Georgian themed event to attract locals and visitors following on from last year’s medieval day at the castle site, where children and adults alike were entertained by re-enactments by the Knights of Skirbeck.

“I’m interested in helping with a Neighbourhood Plan,” says Martin.

“It’s limited what you can do in places like this, I think you’d have to ally it with other projects, like for the Market Place for instance.

“You’re never going to attract bars and cafes back here, it’s probably gone beyond that now. But Folkingham’s history was in having shops and pubs right round the Market Place.

“Maybe at certain points we can try and get an impression of what it was like and treat the Market Place sensitively. I think that’s the thing. We’re planning a Georgian festival in September. That’s something we’re working on with the Aveland History Group. It’s bringing history to the community.”

Martin also says that there is much more history to tell and believes an oral history project would complement his own.

“I didn’t go down that route because my book is a general overall history. There’s a lot, though, that could be done. You meet people who’ve got amazing memories, over the last 50 years or more, going back to living in the village, where the shops used to be, the farms… That’s almost a separate project. Certainly that knowledge is all here.”

As the book makes clear, this small, quiet village has a wide-ranging, unique history. Martin charts this both through his detailed written account and the evocative images that help to further bring that past to life. With its fine presentation and breadth of information, this will serve as a primary reference for those researching Folkingham for years to come.

Folkingham – The Reluctant Town is published by The Greyhound Press, priced £28 collection or £33 delivery. Visit ww.folkingham.com for more information and to order a copy.

WIN a copy of Folkingham – The Reluctant Town

We are giving away one copy of this beautifully produced hardback book.
This major new work offers an in-depth study of the settlement’s 1,500 year history, from Anglo-Saxon times to today. It offers new interpretations and ideas on Folkingham’s development together with original research.

The 320-page book is illustrated with over 260 photographs, maps and illustrations, with many of the photos being of rare historic views. It features a Foreword from Dr Anna Keay, director of The Landmark Trust – which now owns the gatehouse of the former House of Correction – and is supported by a full bibliography and a comprehensive themed index.

Folkingham – The Reluctant Town has been produced in England to the highest standards, litho printed on 150gsm sustainable FSC-certified paper, sewn in sections and bound traditionally with red tail bands. It is bound in an aubergine Buckram cloth cover with gold tooling and presented in a matt-laminated colour dust jacket offset by rich antiquarian-style marbled endpapers.