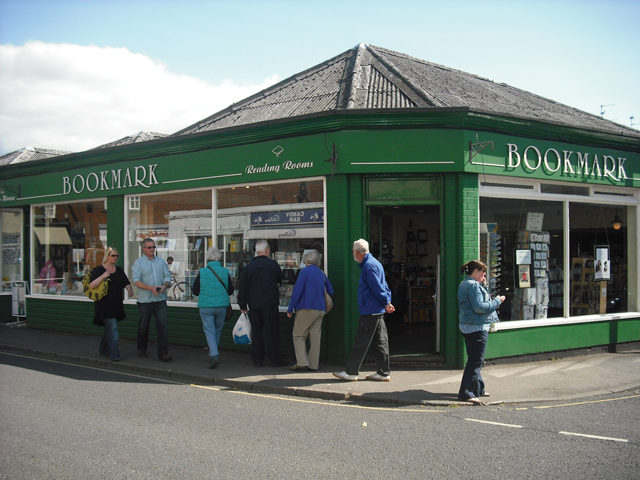 Award-winning shop Bookmark is more than a bibliophile’s paradise: owner Christine Hanson has gone out of her way to create a homely atmosphere that is welcoming to everyone.
The book industry has changed enormously since Christine took over the original, tiny Spalding shop in 1991, but her ability to meet the demands of her customers has secured the enduring popularity of the store, which is thriving in the face of stiff competition from the internet and the advance of electronic reading devices.

Walking around the shop, which is beautifully laid out with different areas for each genre, enchanting displays (including the travel books housed on a boat-shaped shelf) and sumptuous leather sofas and chairs scattered around to sink into while you indulge yourself in one of the thousands of titles in stock, it is easy to see why Bookmark has been named the country’s best independent bookshop in the past.

Christine, now in her twentieth year as a bookseller, strives to give her supporters more than just a place to buy their books. The shop is an experience and, as well as the latest reads, sells a wide range of gifts, cards, music and toys. On top of that it plays host to bestselling authors and celebrity writers including Bill Wyman, Andy McNab and Alan Titchmarsh and runs its own book group, while serving up tasty home-cooked meals and treats in its coffee shop.

Bookmark was origially located two doors away from its current site in The Crescent – a narrow, twisting street, which is home to a fantastic array of fiercely independent shops.

Christine first became involved in the business when she helped out the former owner while her son was little.

Christine said: “The owner suggested I buy the shop from him. I knew I wanted my own business, but it took me thirty-seven years to find what I wanted to do.

“I worked in Spalding Library after I left school and I always liked books but had never thought of making a living from them. But once I took the shop on I loved it – the people and the books. We cover all walks of life, it’s really interesting.”

Soon after taking over the shop Christine realised it was a natural meeting place for like-minded people and she knew she wanted to create a bookshop with a café, as there wasn’t enough room for one in the current premises.

“It took me seven years to find the right place for it,” Christine explained. “That ‘right place’ was two doors away in the former Graham Lowe furniture store. So in 1998 I moved from 500 square feet into 6,000 square feet of floor space – it was like going from the bottom division to the top!

“With help and guidance we created a natural, homely meeting place for all ages. I wanted it to be somewhere children enjoyed coming. People can come here on their own; the waitresses talk to them and so they never feel lonely, but if they want peace and quiet they can have that too.

“Over the years we’ve added toys, cards, music CDs and gifts to the items we stock. It’s an experience to shop in here. If you’re stuck for that unusual gift you can usually find something here.”

Testament to the shop’s success is the long list of honours it has been awarded, the latest being named runner-up in the Best Bookshop category of the Best Small Shops in Britain competition organised by the Telegraph earlier this year. Other accolades include the prestigious Independent Bookshop of the Year title in 2001. It was also named regional winner in the same contest in 2007 and 2008.

Christine is very proud of her awards, and in particular being shortlisted for a marketing award in 2003 when the shop was up against internet giant Amazon, and says it’s satisfying to feel the shop is doing something right and giving people what they want.

Bookmark is also well known for the famous names it draws to Spalding. Authors and writers including journalist Kate Adie, cook Clarissa Dickson Wright and gardener-turned-chat show host Alan Titchmarsh have all paid a visit to talk about their work, sign copies of their books and meet their fans. The most popular author events have attracted audiences of 300. Christine and her team are currently working hard, pitching to publishers to secure an interesting variety of speakers for the coming season.

Christine and her staff are deeply passionate about reading and promoting new authors and this year participated in World Book Night, helping to give away 300 books as part of the national drive to promote reading; they hope to do so again next year. A book group launched at the shop is also proving hugely popular, giving readers the chance to meet up and discuss two chosen reads each month. Younger readers are also catered for with special events based around characters from children’s fiction including Horrid Henry, Harry Potter and the Mr Men.

Despite the advance of technology in the publishing industry and the world wide web, Christine said she is confident about the future of the book trade: “The High Street has been affected full stop, not by the recession but by the internet. Bookshops are challenged by the e-reader but there is still a considerable number of people who buy paperbacks. I can sit and read a book for hours but I can’t sit in front of a computer screen for the same amount of time without my eyes hurting. I believe there will always be a place for the book – it has survived television, cinema, radio, theatre and computers, so I’m pretty sure it’s going to survive the next technological advances. I enjoy the experience of reading a book and you can share books with children.”

Bookmark prides itself on giving something back to the community and has supported numerous local and national charities. Staff have also started an outreach project, selling books in a village primary school which does not have access to a library.

Looking back over her twenty years in the industry Christine says there have been many high points and achievements, but her proudest moment was helping two local authors into print with national publishing houses. Thanks to Bookmark, both Rex Sly and Reg Dobbs were able to get their local history books onto the shelves.

Christine is passionate about making reading accessible to all and prides herself on creating an atmosphere in the shop which isn’t elitist or stuffy, and I for one can’t wait to make a return visit.