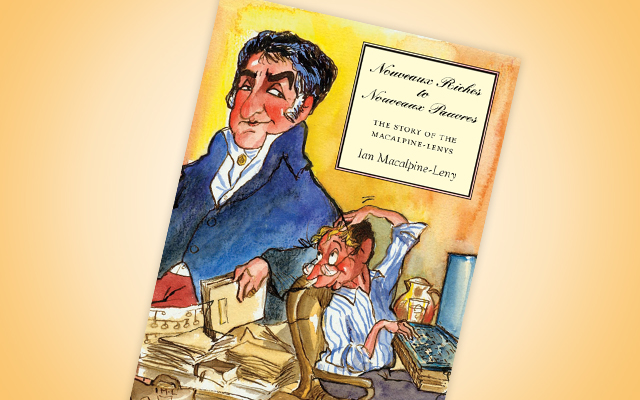 Lincolnshire author Ian Macalpine-Leny tells the story of his extended family in an entertaining and informative new book, tracing his ancestry from eighteenth-century Scotland to present day Doddington, with many lively tales in between, including an expedition in the Aden Hinterland and a round of golf with Crown Prince Hirohito and Edward, Prince of Wales.
Researching family histories has become one of the most popular pastimes in the last decade, helped by the wealth of resources available on the internet, as well as the popularity of the television series, Who Do You Think You Are? Amateur genealogists across the country have marvelled at the discovery that an ancestor fought in an historic battle, or have been disappointed to find that they come from a stock of vagabonds and heretics. The difficulty is in getting a real sense of the characters that make up our extended families.

Lincolnshire writer Ian Macalpine-Leny has spent six years gathering diaries, letters, recording personal reminiscences and scouring public records in order to paint a vivid picture of his family. From the Scottish Highlands, to Moghul India, the Boer War, Colonial East Africa and rural Lincolnshire, ‘Nouveaux Riches to Nouveaux Pauvres’ charts the business affairs, battles and the bellylaughs of several generations of three families dating back 200 years. “The story of our family had really been forgotten, so it was a question of rediscovering it,” said Ian.

Ian’s great-grandmother, writing in the late 1800s had recorded the facts of daily life extensively, though with little interpretation or reflection. “When you look at it, it’s desperately dull, but when you read it you get a mirror image of their lives and it’s absolutely incredible. I think it was a thing that Victorian ladies did, just as they painted watercolours. We’re talking about the privileged classes here,” explained Ian.

Elsewhere, a colourful encounter with the future Tsar Nicholas of Russia and the experiences of a cavalry man in India and the Boer War, as recounted in the diary and letters of his great uncle Bob Macalpine-Leny were fascinating in themselves.

The writer’s ancestry has a strong presence in his Lincolnshire home, the Old Rectory on the Doddington Hall estate, where he lives with his wife, Anne and his two sons, William and Jamie. In the room where we meet for our interview, a large painting of the Dumfriesshire estate of Dalswinton hangs – a magnificent property that belonged to one enterprising relative, James Macalpine Leny whose story is told early in the book; on an adjacent wall, portraits of three more of the book’s central figures. One wall in a small study bears a khanjar presented to his grandfather, Harley Macalpine-Leny in the Aden Hinterland following an expedition in 1903, and to the right of it, on a table, sits a papier-mâché dog, made by his grandmother Dorothy Bergne-Coupland.

Ian has described the backdrop against which all of his family’s experiences occurred, in a way that makes the book inviting to the general reader. Fans of British colonial history, military and naval history will find much to relish, as will Lincolnshire readers who will get a sense of life in nineteenth and twentieth-century Skellingthorpe and Doddington, including his father’s experiences as adjutant to the Ruston’s Home Guard. It is the wide-ranging historical knowledge, as well as the idiosyncrasies of the family that keep the book entertaining.

Ian admits to finding many fascinating autobiographies let down by the writing, so he was mindful of keeping readers’ attention by putting his inherited sense of humour to use. He said: “I have a book by my great uncle Lewen Weldon, who ended up surveyor general of Egypt. He had a captured German freighter and was launching sea planes off the Turkish coast during the First World War, but his book is most boring. I was born with a wonderful thing, it’s called a sense of humour.”

With members of successive generations of the family sharing names, the book helpfully includes a series of family trees in order to aid the reader in following the chronology. Though the narrative progresses in roughly chronological order, the book can easily be enjoyed in a non-linear fashion, in which case the family trees are key.

For Lincolnshire readers in particular, the liveliest character in the book is undoubtedly Ian’s maternal grandmother, Dorothy (Dolly) Bergne-Coupland. Many readers may well remember Dolly, who founded the local RSPCA, was a great supporter of Lincoln Cathedral and donated many of her collectibles to the Usher Gallery.

“She believed that everyone should know how to do everything. She could change a washer on her tap, do the mechanics on her car and she was very good with horses and dogs,” said Ian.

The most striking photographs in the book show Dolly flanked by a number of papier-mâché animals, which she would put to various practical uses, one of which was to sit in the front passenger seat of her mini in order to ward off hitch-hikers. “When she got a mini for her eightieth birthday, she took it back to Gilberts. She said ‘It doesn’t use any petrol’. She’d had a huge old-fashioned Wolseley before, that did about ten miles to the gallon,” said Ian. “At the book launch one of the people in the village came up to me and said, ‘I was working in the office in Gilberts when that happened’. Can you believe that?”

Inevitably, Ian was faced with recounting details of his own life towards the end of the book, in order to bring the story up to date. Trained in Biological Sciences at the University of Birmingham, Ian soon tired of life in the laboratory and found himself working as a resident representative of international insurance brokers, Willis Faber in the New York offices of Johnson and Higgins. His involvement with the UNISON network is detailed in a previous book, though Ian had long anticipated making his family history into a book as soon as he reached retirement. “I got sidetracked by writing a light-hearted business history, which took two and a half years. That was easy because everyone was still living. I started again in August 2005, so it took six and a half years. I’d done a certain amount of research over the years, but then I concentrated on it full-time. What has changed is the amount of information in the public domain, thanks to digitalisation,” said Ian. “It’s like working on a big, living jigsaw. I like doing research and I have my little ‘tricks’.”

Despite the seemingly exhaustive account that Ian has composed, there remain, as with any family history, aspects that can never be recovered. The letters written by his great uncle, Lionel Halsey to King George V, concerning Edward VIII would even have been of national interest. Lionel was Chief of Staff to the Prince of Wales for a time, travelling the world and on one occasion meeting the future Emperor of Japan, Hirohito, with whom he played a round of golf. Sadly, Lionel’s letters were destroyed after his death in accordance with his wishes.

I asked Ian what he thinks the prospects are for future genealogists, in an age where we document almost every hour of our lives, but in a format which may later be irretrievable, and whether he thinks the hard work will be continued by his sons.

“They’ll have the book. This is a line in the sand,” said Ian. “But looking into the future, will they be able to afford to maintain this house, and if not, what would happen to all the pictures?”

For any readers who are tempted to start looking into their own family history, Ian has learned a lot of valuable lessons which he was more than willing to share with others. “The first thing you do is buy a voice recorder and go and see all of your elderly relations. Ask them whether they have any old photo albums, diaries, or visitor books, press cutting books or scrap books. And then you see what’s available in the public domain. If a family owns land, if a member is in the army, navy, or a member of the church, it’s all traceable. You can go to the National Archives at Kew and also search the daily newspapers, which have now been digitised, and of course there’s the Census material. As a Scottish family, we were greatly helped by the website ScotlandsPeople. I would give anyone attempting to research and write their family history these bits of advice: look under every stone – go and interview everybody; be persistent – if you don’t receive a reply to the first letter, try again; try to be factually correct and try not to upset anybody!”

‘Nouveaux Riches to Nouveaux Pauvres’ is published by Haggerston Press and is available from the Lincolnshire Life website, or from the author’s website, www.macalpine-leny.co.uk price £30 including postage and packaging.