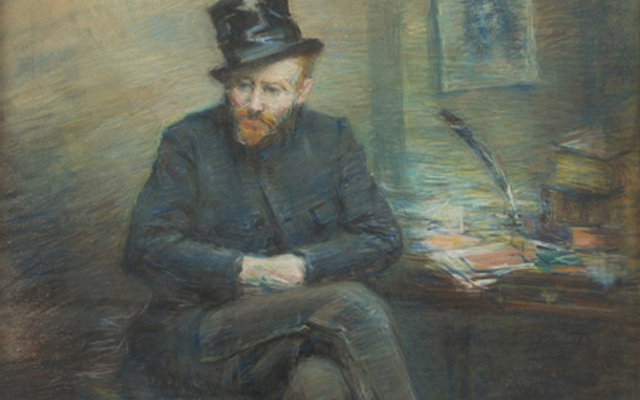 Incredibly, the recent discovery of what appears to be the only full body portrait of Vincent van Gogh in existence, drawn by artist Jeanne Donnadieu and entitled ‘L’Incompris’ (The Misunderstood) has managed to find its way into the Usher Gallery, Lincoln.
Probably painted when Jeanne Donnadieu and Vincent were neighbours in Paris in 1886, it is a truly stunning pastel that captures the very character of the troubled artist in every way; from his Dutch colouring and eccentric manner of dress to the chaotic arrangement of one of his greatest interests in life – books.

Authenticating the picture has required painstaking research but beneath the table is what can only be a Bible with gilt corners. The previous year he had inherited his father’s Bible and painted it himself. He drew his own crumpled top hat thrown casually over a statuette of Venus in 1886. His trousers are rolled up in the manner of the Dutch workers he had drawn in previous years. The top button on his jacket is done up – a habit of Vincent’s that can be seen on self portraits and also the portrait of Dr Rey, where he used his own body as the model for the picture.

The list goes on but there is something more to this portrait.

Although having the chance to see this picture in itself will be of great interest to art lovers around Lincolnshire there are some other remarkable coincidences which offer food for thought in connection with the county. It could be that ‘The Misunderstood’ Vincent has something more to teach us than just art appreciation. Here is some food for thought:

• Chad Varah – the founder of the life-saving support group The Samaritans – was born 100 years ago in 1911.
• He established The Samaritans in 1953 – 100 years after the birth of Vincent van Gogh – an organisation which has saved the lives of countless people.
• Varah set up The Samaritans because of a young girl, living near the Usher Gallery, who committed suicide.
• One of the most famous suicides in history was Vincent van Gogh.
• One of Vincent’s more vibrant paintings was ‘The Good Samaritan’.
• Varah studied at the Theological College which is now called Chad Varah House, part of the University of Lincoln Cathedral Campus and home to Conservation & Restoration and History of Art & Design.
• Chad Varah wrote a television play, ‘Nobody Understands Miranda’. The portrait of Vincent is entitled by the artist, ‘L’Incompris’ meaning ‘the Misunderstood’.

Interestingly, they are both listed among the great social reformers, philanthropists, artists and benefactors in history who have made seismic shifts in society by improving the quality of life for poor, disadvantaged and marginalised people. The list includes William Wilberforce, John Cadbury, Thomas John Barnardo, Florence Nightingale, Chad Varah, Martin Luther King Jr, Van Gogh, Rembrandt, and Charles Dickens.

The awareness day for the Samaritans, encouraging non-judgemental emotional support for people in distress, is 24th July this year – the very week of the anniversary of Vincent Van Gogh’s death.

This beautiful and thought provoking portrait will be on display at the Usher Gallery, Lincoln until June 10th.