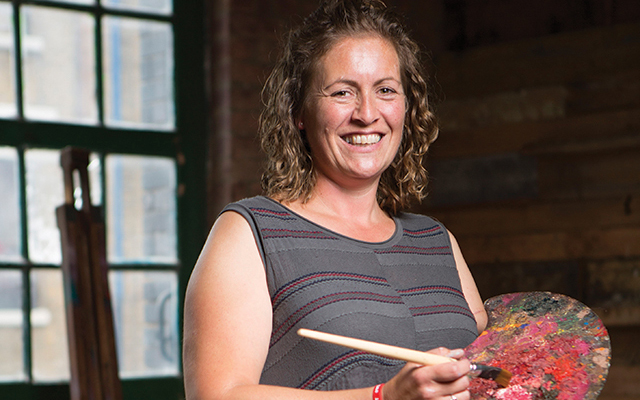 She only took up painting as a hobby while recuperating after a serious accident, but Angela Watson has uncovered a hidden talent which she has been showcasing on a primetime BBC television programme.
She is one ten amateur painters who took part in The Big Painting Challenge – an intensive six-week artistic boot camp where each competitor bids to perfect their skills over a series of challenges and be crowned the overall champion.

The mum-of-two from Authorpe, near Louth, only started painting three years ago after an accident at her home in which she suffered life-threatening injuries when she was flung from the bath by a speeding car that crashed into her house.

“I’ve always been interested in art and nice pictures, but no more than anybody else,” says Angela.

“I liked something nice to hang on the wall but I worked in farming, and we were working around the clock. I took three or four art classes after having my children but had to stop because I was just so busy on the farm.

“After my accident I spent thirteen weeks in hospital and then, when I came home, I was in a wheelchair for a while. I’d been doing a lot of jigsaw puzzles to pass the time, which was great to start with but I started getting quite depressed.

“I had always been a manual worker, I liked to run, play hockey and ride horses but my whole life had stopped; I was really fed up with everything, so my daughter Maisie suggested I start painting and I took her up on it.

“She had to encourage me a few times – she got me some paper and pencils and some watercolour paints and then I found a little class to go to in Louth. It was a real struggle as I couldn’t stand or sit for too long, but creating something gave me a real buzz and I really wanted to do it.”

Angela initially started out recreating photos of her own animals stored on her iPad and then began to get requests to paint cattle, horses and dogs belonging to her friends and family after they saw her work.

It was an art friend who encouraged her to enter The Big Painting Challenge, hosted by Mariella Frostrup and Rev Richard Coles, and despite initial reservations she decided to go for it, never expecting to win a coveted place on the show.

Despite failing to fill in her online application properly Angela was contacted by the broadcaster, which urged her to complete her entry, which she managed to submit just before the deadline closed.

“I didn’t think I’d ever hear from them again,” she recalls, “then I got a phone call and was asked to go for an interview.

“We had to do a two-hour challenge in front of the cameras and then we had to do an interview on camera. It was all quite nerve-wracking but I really enjoyed it.

“The whole experience has been absolutely fantastic; the BBC has been so supportive and helpful and I have made some lifelong friends – we’ve all met up since filming ended, they’re a great gang.”

On the show the contestants are divided into two teams led by mentors Diana Ali and Pascal Anson and each week are taken to different locations, including Whipsnade Zoo and the Queen’s House in Greenwich, where they must produce two pieces of work in different disciplines – portraiture, landscape or still life. Their work is then judged by Lachlan Goudie, Daphne Todd and David Dibosa.

Because the show is only part way through its run when we chat, Angela – who was voted off in week four – isn’t allowed say who wins, but one thing she is determined about is to keep painting and learning.

“I’m very pleased with what I have achieved so far,” she adds, “but I have not learned as much as I would like to yet – when I start a picture I don’t always know how to tackle it.

“At the moment I feel like a sponge and am desperate to learn things.

“Everybody on the show considered themselves an artist, but I felt like I was a new recruit because I haven’t really been painting too long; but because of that maybe I didn’t have so much pressure on me.

“I suppose I had a ‘nothing to lose’ attitude and felt that anything I managed to achieve was fantastic, which is how I take life now. I take each day at a time and do the best I can.”

Angela says the inspiration for her work comes from all around her, although given her agricultural background she admits animals are a key theme.

“My inspiration really can come from anything; I’ll see something – like the enormous great big, old buildings when I’m down in London and think that’s wonderful and you somehow just want to capture it.

“I’ve painted a lot of animals, but what I like to do more than anything is great big skies with dramatic lighting – not just a sunrise but stormy and atmospheric views.

“I started with watercolour, then had a little go with pastels and then got onto acrylics, what I am hoping to try next is oil painting. I think it will lend itself to my way of working as acrylics dry so quickly and are quite hard to blend. Oils don’t, you are waiting for them to dry.

“I don’t really have a favourite medium, because I’ve only been doing it for such a little time – anything to do with painting or drawing appeals to me.

“I’m quite lucky that my daughter is arty too – our whole house is covered in paints as I just tend to work wherever the light is the best.

“I was lucky to survive the accident, but since it happened I’ve not been going to work; to do a normal job would still be a struggle some days. I still do so much physiotherapy and still have to go and lie down a lot.

“Before I did so much work and fitted so much into my life, I don’t suppose I’ll get back to that – but I want to be as good as I can be and I’ll never stop trying. I just have this massive determination to do things the best I can.

“I’ve already had a lot of interest in my work, so I’m definitely going to keep painting.”