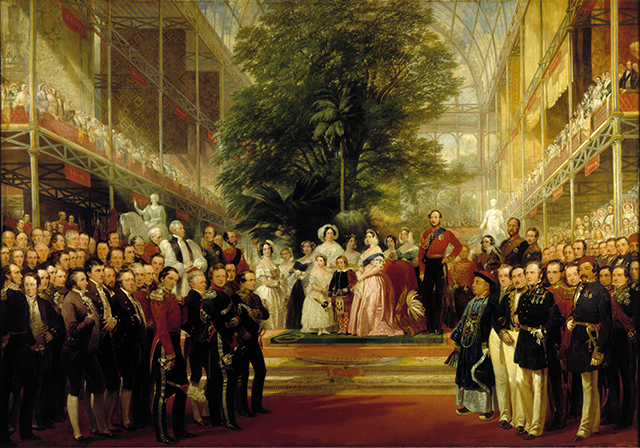 A new exhibition celebrating the 200th anniversary of the births of Queen Victoria and Prince Albert opens at The Collection and the Usher Gallery, Lincoln this month. Lincolnshire Life had a preview of some of the exquisite objects and works of art on loan from the V&A.

The exhibition, which will be shown in galleries in both The Collection and The Usher Gallery, traces the decade from the Great Exhibition of 1851, through to the establishment of the South Kensington Museum and the growth, from its beginnings, of what is now known as the V&A.

Prince Albert and Queen Victoria played a crucial role in the development of Victorian taste and more than ninety objects from the V&A will illustrate their influence and tell the story of the museum’s establishment.

The Great Exhibition was created and championed by Prince Albert and was the first international exhibition of its kind showcasing design and manufacturing. The temporary ‘Crystal Palace’ built in Hyde Park to display the scientific and exotic goods from Britain and beyond was a huge spectacle as well as a profitable success. The Victoria and Albert Museum was founded using some of these proceeds as part of the mission to educate designers, manufacturers and the public in art and design by establishing a cultural district of museums and colleges in South Kensington.

The South Kensington Museum was founded in 1852 and moved to its current home on Exhibition Road in 1857. Forty years later it was renamed after Queen Victoria and Prince Albert, commemorating his role in its foundation. Accessibility was paramount from the start with innovative gas lighting installed to allow evening opening, as well as weekends, for the working general public.

A young civil servant named Henry Cole had been pivotal in persuading Prince Albert that an international exhibition in London would educate the public and inspire British designers and manufacturers. Henry Cole was appointed as the first director and he set about purchasing a selection of objects at the end of the Exhibition. These formed the core of a new Museum of Manufactures, which opened its doors in 1852.

Amongst the objects in the exhibition will be the first commercially produced Christmas card, a hand coloured lithograph, which is attributed to Henry Cole. Other items include a painting from Dulwich Picture Gallery of Queen Victoria aged 4 by Stephen Poyntz Denning as well as paintings by Queen Victoria’s favourite artist and chief portraitist of the Royal Family, Sir Edwin Landseer RA.

The exquisite Gloucester Candlestick was bought in 1861 and was one of the first pieces in the V&A collection. It was made for Gloucester Cathedral between 1104 and 1113 and is one of the finest surviving examples of English Romanesque, gilt-bronze metalwork.

Teaching good design and taste to the wider population is illustrated by two similarly styled small caskets; one of which was produced in silver while the other was manufactured in nickel, facilitating its availability to a wider but less affluent market.

There is a Lincolnshire connection to the foundation of the Museum through its picture collections. Victorian politician Richard Ellison was MP for Lincoln from 1796 to 1812. He was the son of the banker of the same name who owned Sudbrooke Holme in the county. After his death, his widow presented his collection of 100 water colours to the Museum to form the basis of a National Collection of Water Colour Paintings which with the Sheepshanks Collection became the foundations of the National Gallery of British Art within the South Kensington cluster of museums.

The Usher Gallery will hang works by Turner and Constable from its own Victorian art collection alongside four more from the V&A. A beautiful portrait of Albert Edward, Prince of Wales with Prince Alfred by Franz Xaver Winterhalter had been loaned by the Royal Collection Trust. The exhibition will also feature portraits from the National Portrait Gallery of influential figures from the era including Sir Robert Peel and Henry John Temple, 3rd Viscount Palmerston.

During the exhibition, which opens on Saturday 5th October and will run until Sunday 5th January, there will be a series of lectures and events. For further information visit: thecollectionmuseum.com.

Tickets for the exhibition are priced at £5 adults, £4 concessions and children under 16 years of age go free.