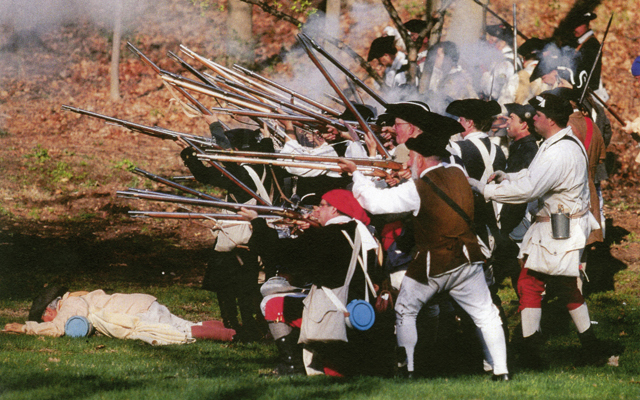 ‘Listen my children and you shall hear / Of the midnight ride of Paul Revere…’ Those words from ‘Paul Revere’s Ride’ by Henry Wadsworth Longfellow bring instant recognition to the Battle of Lexington. Re-enacted each year on-site at Lexington Green, the skirmish marked the opening battle of the Revolutionary War. Recreated moments from other equally important locations, such as Plimouth Plantation and the home of John Quincy Adams, keep the spirit of 1776 alive.

We continue the story of the Royal Lincolnshire Regiment 10th Foot – The American contingent from our February issue
In the late 1960s, men and women gathered together from various parts of New England to celebrate the forthcoming bicentennial of the American War of Independence.

Town after town in eastern Massachusetts (MA) and southern New Hampshire re-established long dormant town militia and minute companies. They began to stage mock battles with ‘British Regulars’. In March 1967 at the old North Bridge in Concord MA, a local historian and photographer watched in amazement as participants cloaked in bathrobes and papier mâché grenadier caps tried to emulate the Crown troops. That man was Vincent J R Kehoe and he was determined to produce a British unit that would appear in the field as he believed a British soldier would have looked in the year 1775. Kehoe wanted to do it better and his aim was to eliminate the red paper caps, the musical comedy uniform coats and the generally comic appearance of those who had played the role of the British troops in the first pageant-playlet. He knew that many regiments of regulars were garrisoned in the Boston area in 1775, among them the 4th Foot, 10th Foot, 23rd Foot and the 64th Foot. Having served in the 10th Mountain Division during the Second World War, Kehoe chose the 10th Regiment of Foot as the regiment he was interested in establishing. With the help of two retired British officers, Major Nick Dawney and Major-General Sir Christopher Welby-Everard, Kehoe began several years of painstaking research studying the history and the uniforms of the 10th Foot. Sir Christopher was the President of the 10th Foot Royal Lincolnshire Regiment Association and formally authorised Kehoe to establish an American Contingent on 15th July 1968. On 6th January 1970 Kehoe received his commission as ‘Colonel of the 10th Foot’ from the regimental association. The first organised meeting of the American Contingent was held on 17th April 1971 and from that meeting the first company was born, the Light Infantry Company. The first uniform worn by Col Kehoe, whilst a big improvement on the 1967 version, was not strictly accurate and over the next few years every element was changed or refined, reflecting new information which became available. Each year, from their formation to the present day, the American Contingent has measured its growth, progress and appearance standards on 19th April, as this was always the first day on the field at Lexington Green MA and Concord’s North Bridge.

By 1972 the American Contingent had grown to two companies, the Light Infantry and the Grenadiers. On 20th April 1975, Sir Christopher presented the King’s Colour of the American Contingent at a parade in Chelmsford MA. Col Kehoe commanded the Guard of Honour on 11th July 1976 in Boston MA during a visit by the Queen. In the autumn of 1976 the regiment travelled to England and put on ceremonial parades at Lincoln Castle on 1st October and at the National Army Museum in London on 5th October.

The 10th continues to be the largest and best re-enactment unit in New England and I believe Lincolnshire people would be proud to be associated with them. The Commanding Officer is Lieutenant Paul O’Shaughnessy. The regiment meets and parades regularly throughout the spring, summer and autumn. The Adjutant, Major Richard Amsterdam, was pleased to be contacted by Lincolnshire Life and responded very positively.