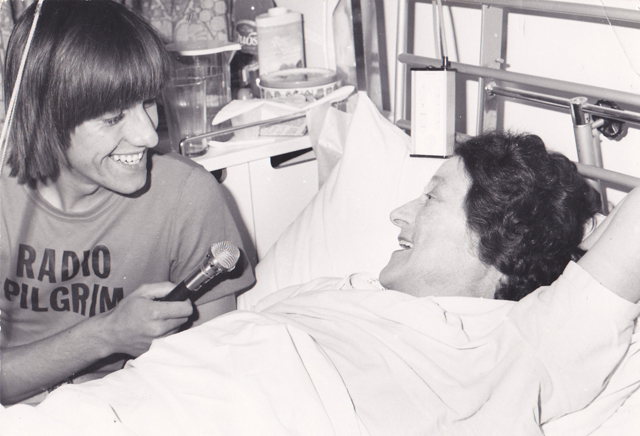 40 years and so much more

Radio creates the impression that all there is to it is music, news and weather with a little chitchat thrown in here and there. Look closer at the history of Pilgrim Hospital Radio (PHR), however, and you will soon realise how much more there is to a local radio station.
This year the station celebrates its 40th year of news, reviews and interviews, making PHR a vital link between local people and events, keeping patients up to date and informed during their stay in hospital. This brief resume hardly touches on the variety of entertainment, amusement and information PHR has delivered since starting to broadcast back in May 1974.

From the early days in a ‘storage cupboard’ to their current impressive studio, from vinyl to computer, PHR has grown with the times both musically and technically. It was back in 1974 that Mel Kennedy, his brother Martin and Mike Carson, who ran their own Occtopus Disco at the time, approached Pilgrim Hospital with the idea of in-hospital entertainment by way of radio – a medium by which patients could listen to music, request their favourite songs and artists and keep up to date with local sport, news, events and people. The hospital agreed and consequently this free, voluntary entertainment service was born.

If you know the difference between mono and stereo, between cassette and CD and can remember a diamond stylus, chances are you may have spoken to one of the ward visitors from PHR or listened to one of the volunteer presenters who over the last forty years have been entertaining patients and staff – a group of hard working, dedicated people who give up their time to offer this unique and informative medium to our local medical institution.

The station relies on all kinds of donations and over the years equipment has been donated, along with computers, furnishings and of course the all-important music – there is now an impressive collection of about 7,000 vinyl singles, 2,000 LPs and even a large collection of the really old 78s! With four operational turntables together with their diamond styli PHR are equipped for just about anything.

Over the years outside broadcasts by Des Portas, sports programme producer for many years, have brought interviews with the likes of Barry Sheene, Eddie Kidd, Seb Coe and Sir Bobby Charlton. He even took a link to the Royal Albert Hall in February 1978 for an interview with Dave ‘Boy’ Green prior to his bout with Ray Johnson, which was relayed back to the studio – quite an achievement for a small local station; especially, so I was told, prior to a bout.

Des said: “People are always happy to take time out for an interview for local hospital radio.”

This is evident from the diverse array of people interviewed, from Ken Dodd to Dr Magnus Pyke, John Motson to Lesley Garrett and Alvin Stardust to Mark Simmonds. PHR still has its own press box at Boston United’s York Street ground today and reports are sent back to the studio via Ernie Napier, keeping listeners updated with all results. PHR has been involved locally with many sporting institutions including Boston Speedway, the Sea Angling Club, Boston Amateur Boxing Club and of course the Seabank Marathon where every year the station are on the finishing line, encouraging runners through that very final stage and announcing each individual competitor by name as they complete the course.

Have you ever thought about trying your hand as a Radio Presenter – a Chris Evans or Zoe Ball, or maybe matching the smooth sounds of Simon Bates or Emma B? Rock, pop, soul, blues, country or folk – whatever your music tastes are, could you spend a couple of hours a week sharing your musical favourites, your stories and views, your knowledge and even your personal experiences with people on the wards in Pilgrim Hospital​​? Many popular radio presenters today started their careers on hospital radio: Chris Moyles, Scott Mills, Ken Bruce, Simon Mayo.

Some members like current chairman Geoff Thompson and programme director Simon Robinson have been involved for twenty years plus. In May the studio was opened to the public as a celebration of forty years’ entertainment giving people the chance to see their two newly refurbished studios and impressive library with collectable vinyl from floor to ceiling, all catalogued and stored on the new computer system.

The hard work of volunteers over the years has provided PHR with technical upgrades and donated equipment has enabled the station to move with the times.

The very vital role of Ward Visitor is an important bridge between presenters and patients and it is these visits and chats with patients on the wards that make all hospital radio programmes so personalised. If you like to talk and listen to people this could be just the role to get you involved – their stories are what make the shows so special. People have so many memories attached to music, the role of Ward Visitor can be rewarding and fun. The requests and stories are then relayed back to the presenters and broadcast that evening at a selected time – great teamwork and great personalised entertainment.

PHR relies entirely on fundraising and sponsors to keep going. The volunteers are always looking for ways to raise money and hold various events throughout the year. Their open weekends are always a big part of this. By helping local events, such as the Seabank Marathon, they are also given donations from the organisers. They have collections once a year in the town, usually in June. So if you see a bright red bucket with an enthusiastic volunteer on the end smiling hopefully, please don’t ignore but stop and have a chat and even give a request if you know of someone in the hospital at the time.

Sponsors are also a large part of the way PHR is funded. For local companies, organisations, businesses etc it is a great way to get noticed locally with every show having its own sponsor. Musical jingles are tailor made for each individual sponsor and played throughout the show – a great way to get your name out there. If you are interested in sponsoring a show please contact the programme director Simon Robinson, who would be very happy to discuss things further with you.

For more information on volunteering or sponsoring or just to find out more about this great local institution please contact PHR via email on PHR@pilgrimhospitalradio.org.uk where you can also make a dedication. Visit the website www.pilgrimhospitalradio.org.uk or ring directly on 01205 351226. Of course, if you would like to come along and get involved with the station in whatever capacity you like – presenter, ward visitor, secretary – PHR are always on the lookout for new talent. Who knows, Radio One or Lincs FM could be the next step!