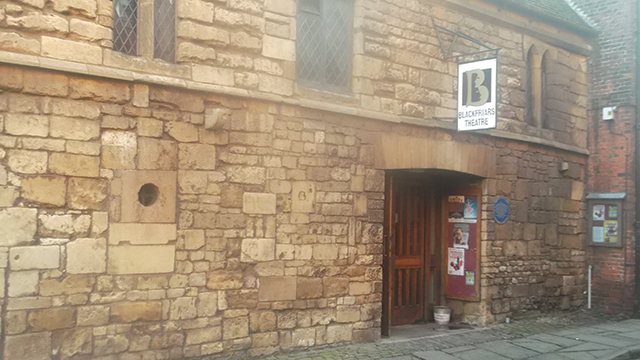 50 years of the Blackfriars Theatre

Fifty years ago, on 11th October 1966 Blackfriars Theatre in Boston opened with a grand Gala Evening with Lincoln Theatre Company presenting The Magistrate by Arthur Wing Pinero.
This was the culmination of years of hard work and planning by a group of people who realised that Boston needed a proper theatre. The amateur dramatic societies of the town had had enough of having to use small village halls and wanted something more.

Boston Preservation Trust had bought Fydell House, a grand Georgian House in Boston that was falling into disrepair. Along with it they bought some buildings in South Street and the ruins of the old Dominican Friary in Spain Lane. The Preservation Trust had suggested that the shell of the old Friary should be converted into a theatre but it was decided that it would not be able to hold more than ninety seats, which was far too few to make it economically viable. So the idea was dropped until the late 1950s.

A school teacher, Alan Blakely, had come to Boston to live. He had been a member of an amateur dramatic society in Wales where he had lived previously. They had converted an old chapel into a theatre and he was now keen to do something similar in Boston. He became friendly with Alan Champion, the warden of Pilgrim College at Fydell House. Alan Champion and his wife Winifred belonged to the Wyberton Theatrical Society. They too were anxious to find a better venue to host their productions. Playgoers joined in with the search and in 1959 all the drama groups in the town organised a meeting to discuss their plans. Alan Blakely together with local architect Alan Meldrum explored old buildings that may have been suitable but they found none that were really right. At this point Alan Champion remembered where he parked his car amongst the leaky ruins of the Old Dominican Friary. The shell of the Friary had stood forlorn and neglected for many years. Being bombed in the Second World War had not helped the situation. It was a sad end for this historic building which had once been the Refectory where the monks ate their meals. The Friary had been founded in the twelfth century, destroyed by fire in the thirteenth century and rebuilt between 1288 and 1309. It was dissolved in 1539 and was subsequently owned by the Duke of Suffolk.

It was decided that the Friary ruins were to be given a new lease of life and that they would be the ideal place to have a theatre. However there was a long road ahead and a huge amount of work to be done. The Blackfriars Trust was set up under the guidance of Mr Hoffrock Griffiths, who as well as being the town clerk was also a lawyer. An accountant called John Penny was given the job as treasurer and Alan Champion had the mammoth task of raising money for this new venture. An appeal was launched in 1961 to raise money so that the actual building work could start. To start with £20,000 was raised. Half came from local sources of all different kinds and a large sum came from the Boston Preservation Trust to commemorate Canon Cook, whose foresight had led to the purchase of the Friary. Canon Cook, who had been the vicar of Boston back in the 1930s, had been, along with a Mr Holman Sutcliffe, the founder of the Boston Preservation Trust. Members of the various dramatic societies raised money in every way possible.

Champion, Blakely and Meldrum all got heavily involved in the development and became known as “the Three Alans”. It was the inspiration of Alan Meldrum to use the Friary shell as the entrance to the theatre complete with bar and rehearsal rooms, whilst building the auditorium to the rear with the stage backing onto the walls of the Guildhall next door. The efforts of hundreds of people went into getting the project off the ground.

Finally, all the hard work and effort paid off and Nigel Abercrombie, the Secretary of the Arts Council, officially opened the theatre on 11th October 1966.

The opening of the theatre was only the first step in the development of a complete arts centre. Soon plans were drawn up to improve the facilities. The middle studio and top studio, together with the spiral staircase, the kitchen and the committee room were all added to the building and were actually built into cottages 11 and 12 in Spain Court. This extension was opened in 1974.

Through the years many drama companies have performed on the Blackfriars stage performing an eclectic mix of productions, from ballets to Chekov; from pantomimes to pop music. Local societies have been the stalwarts from the start: Boston Playgoers Society, St James Dramatic Society and Wyberton Theatrical Society with Boston Operatic Society joining in a bit later on.

Volunteers who have a passion for the venue have truly kept it going. Big thanks must go to them and the people who pulled it through the problematic months in 2008. If it wasn’t for them Blackfriars Theatre would not be here today.