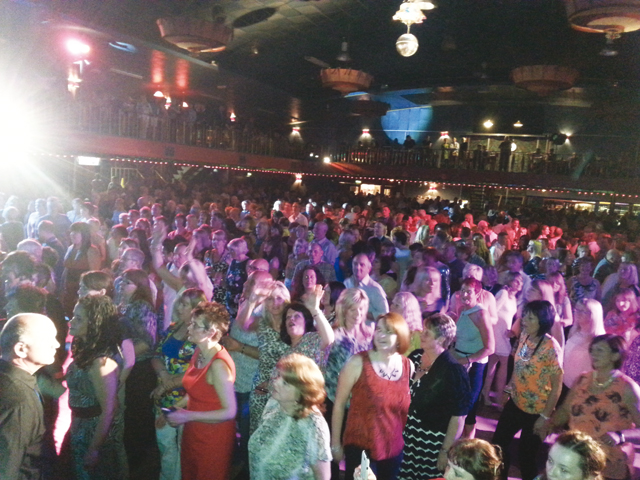 50 years of the Starlight Rooms at Boston Gliderdrome

The Gliderdrome dance hall in Boston is an amazing place. To people of a certain age, like me, walking into the Starlight Rooms takes you straight back to being sixteen again with all the heightened emotions that being a teenager brings.
The only thing that is missing is the smell; a mixture of cigarettes, beer and Brut aftershave. Also the 24,000 minute fairy lights in the ceiling that gave the Rooms their name are gone but I presume in these days of health and safety they would be considered a fire hazard.

This year the iconic Starlight Rooms celebrates its 50th birthday and what a history it has had. How did a small market town like Boston manage to have a dance hall that could attract such names as Stevie Wonder, Elton John, T Rex and Otis Redding? Ty Dalby, in his book Gliderdrome Glory Days, thinks that it did so well because of its size compared to other concert halls that were available at that time.

The story goes right back to the early 1930s when it was opened as an open-air skating rink, hence the name Gliderdrome. Whilst doing research for his book Goin’ to the Dance, author Dave Peatling found a notice in the Lincolnshire archives advertising, ‘Keep fit at the Gliderdrome, Shodfriars Lane. Open air skating every afternoon.’ This was in the Standard dated July 1939. He also found an advert for an open-air dance on Thursday 13th July from 8pm until 11, price one shilling.

The dances came about when some of the skaters asked to be allowed to dance for half an hour after the skating sessions finished. This was agreed by the management and eventually the dancing became more popular than the skating. Eventually the open-air rink was built round and a roof put on.

Dances continued during the war and some well-known and popular dance orchestras played at the Gliderdrome, including Victor Sylvester’s Ambassadors Orchestra. Joe Loss and his orchestra visited in 1949 and made several return visits. By this time the Gliderdrome was getting a reputation as a good place to play and in 1950 it was visited by many famous bands including The Johnny Dankworth Seven and Cyril Stapleton and his Orchestra. In the late 1950s rock and roll was emerging and Rory Blackwell and his Blackjacks were one of the first rock and roll groups to visit.

In May 1959 the Gliderdrome was destroyed by fire but within six months it was announced that a new Gliderdrome would open on the same site. In May 1964 came the news that a new dance hall was going to be opened called The Starlight Rooms. They opened on Thursday 19th November, when David Jacobs had the honour of declaring the hall open. After this there was no stopping the stars of the time visiting the Gliderdrome. A selection of the famous names that visited at this time included The Animals, The Kinks, Tom Jones, The Hollies, Brenda Lee and many, many more.

In the next ten years the Gliderdrome went from strength to strength, hosting a neverending list of famous stars. These incuded Jimi Hendrix, Tina Turner, Jimmy Ruffin, Lindisfarne, Slade and Wizzard. Soul and Motown groups always went down well at the Gliderdrome, as Boston is well known for its large amount of soul fans. Otis Redding only toured in this country once but he came to the Gliderdrome when he did, and was greeted by ecstatic fans, as was Stevie Wonder.

Unfortunately, one group, the biggest one of all, did not make it to the Gliderdrome. The tale goes that The Beatles were booked as unknowns and not a lot of interest was shown in them coming, so when Brian Epstein rang the management to change the date they decided to cancel the booking. The irony was that by the time the original agreed date had come around The Beatles were top of the charts and heading towards becoming superstars!

Alvin Stardust visited back in the early days when he was known as Shane Fenton and then again many more times after he had changed his name.

Roy Wood visited the Gliderdrome with three different groups. First of all with the Move, then with the Electric Light Orchestra and finally with Wizzard.

Local author Ty Dalby tells an interesting story about the night that The Jeff Beck Group played. Their lead singer, then unknown, was Rod Stewart – Dalby saw him kicking a ball about on the neighbouring Boston United field before going on to perform later.

Another tale he tells is how friendly and down to earth Tom Jones was when he visited the Gliderdrome, and how he popped round to the owner of the Gliderdrome’s house for a cup of tea!

The era of glam rock came and the Gliderdrome welcomed T Rex, Elton John, Slade and many others. The night that T Rex played was like no other that the Gliderdrome had seen and 5,000 fans were crammed into the Starlight Rooms. Reports said that there were sixty policemen on duty and thirty-three girls fainted. It was also filmed for an ATV documentary called Whatever Happened to Tin Pan Alley?

Unfortunately the ‘Glory Days’ of the Gliderdrome came to an end on 25th May 1973. The management issued a statement that ‘audiences are unwilling to accept reasonable disciplinary rules and ordinary standards of behaviour’ and the Gliderdrome became a bingo hall. As you can imagine, the youth of Boston were not happy with this decision and letters were written to the local papers to plead with the management to change their mind. However, this was to no avail and for many years it was solely a bingo hall.

However in the last couple of years, due to the dedication of Steve Greenhough and with the kind permission of the management, regular dances have started up again. A very good mixture of tribute bands interspersed with great soul stars such as Jimmy James and the Vagabonds and Clem Curtis and the Foundations are tempting people back to this iconic venue. Some nights there are four generations happily dancing away together; some reliving their lost youth and others experiencing the magic of the Gliderdrome for the very first time. Long may it last!

Recently the 50th birthday party was held and a good time was had by all.

The books I mentioned by Dave Peatling and Ty Dalby are unfortunately out of print but Boston library has copies of them if you would like to read more about this interesting subject: Goin’ to the Dance by Dave Peatling; Gliderdrome Glory Days by Ty Dalby.

Archive images of T Rex and Elton John are courtesy of the Boston Standard.