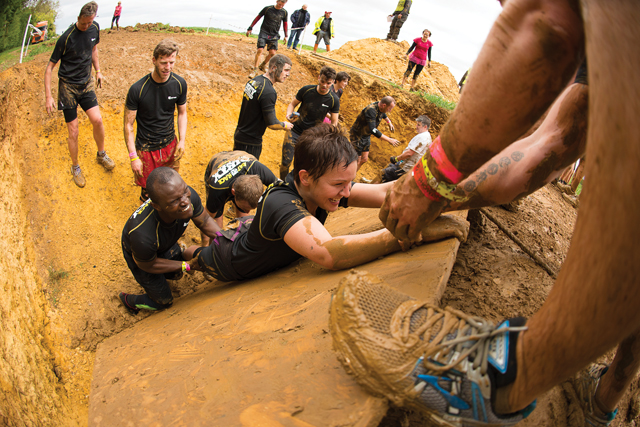 A busy year ahead at Burghley House – and something for everyone

As many are discovering Burghley Park is now much more than just the wonderful venue for The Land Rover Burghley Horse Trials.
Stamford’s famous Elizabethan stately home and its historic parkland now hosts a myriad of events throughout the year and there is something for everyone, whatever their interest or age; from gardening, music, food and film to Easter egg hunts, spooky house tours or getting very wet and muddy while conquering what is ‘the World’s largest assault course’.

An assault course may not be to everyone’s taste but plenty of people clearly relish the challenge. Last year’s inaugural Burghley Rat Race – an option of either a thirteen or twenty mile run or walk around the Park whilst climbing, jumping and crawling through huge man-made obstacles – was so successful, attracting over 5,000 competitors and their supporters to the Park, that the so called ‘Dirty Weekend’ is to be repeated this year, on 10th May.

“It was quite surprising how many came and took part and where they came from, but also it was brilliant fun with the most amazing and happy atmosphere,” said Burghley estate director, David Pennell, whose team started planning for this year’s event almost as soon as last year’s ended. They have already built some new super-sized obstacles to add to the course.

“We learnt a lot from the event last year and we intend to build on that, especially as we hope to attract an even bigger crowd this year,” said Pennell.

Another 2013 first that will be repeated is the Burghley Film Festival, an idea that grew out of the successful Olympic Garden Party. Like the Rat Race, it is intended that this year’s Film Festival will also be bigger and better – not only by adding an extra day but also a more impressive, high definition screen.

The family-friendly outdoor event aims to screen films suitable for all ages; those for children during the day, young people in the early evening and those for the more mature cinema goer later in the day. It is hoped that for anyone with nostalgia for the ‘Golden Age of cinema’ there will be a Classics night, screening favourite black and white films.

“We were delighted by the reception of last year’s festival especially as it encouraged a wide variety of people from the surrounding areas, of all age ranges, to visit the Park which is great,” said Pennell.

Many local families and young people also enjoyed April’s Easter Egg Hunt, October’s Pumpkin Trail and the ‘Beastly Boring’ Burghley House Tours – all of which will be repeated this year. Bigger events this summer include the Living Heritage Game and Country Fair and, in July, the Battle Proms Concert, an evening that combines stirring traditional music with old planes, cannons, cavalry and fireworks.

It is therefore not surprising that, with so much happening, the Park’s calendar is full.

Pennell said: “This year will be the largest number of events we’ve ever managed and it will be a full-on season leading up to what is our major event of the year, the Horse Trials – we can’t do any more!”

It is, however, not simply just an issue of availability. There is another reason.

Pennell explained: “Our first priority is to protect Burghley Park which is a Grade II listed Park. It is a great asset but it must be looked after and preserved.”

Recent projects in the Park include the rebuilding of the 300-metre Ha-Ha, which took ten years to complete, the planting of 25,000 trees to create a fifty-acre wood and last year the re-landscaping around the lake to return the views and vistas to those that were intended when landscape architect Capability Brown, created the twenty-five-acre lake 235 years ago. Maintaining the Parks’ trees and fourteen miles of walls are ongoing projects.

“The Park needs looking after but it comes at a massive cost,” said Pennell. “Therefore all our events are important to us as they go towards generating the income to do that – but there is always a fine balance not only in the number of events we can hold but also the mix, with something for everyone – hopefully we have got it right on all accounts.”

For more information on all the events to be held at Burghley this year go to http://www.burghley.co.uk/events-diary/