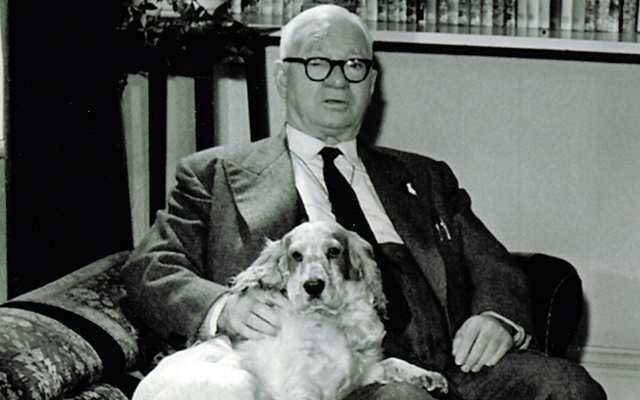 A caring home for every dog

Jerry Green Dog Rescue, founded in Broughton in 1961 celebrates its Golden Jubilee, this year.
Fifty years ago, in a Lincolnshire police station, a young black Labrador lay in a kennel on ‘death row’. No-one had claimed him and he was due to be put to sleep the following day.

But his luck was about to change. Just down the road, not far from the market town of Brigg, the first Jerry Green Dog Rescue Centre was almost ready to open its doors.

“The paint was hardly dry on the kennels when the police called us that day, asking if we could take this stray dog,” recalls Peggy Dornom, the charity’s treasurer. “And what did we call him? Lucky, of course!”

Peggy, who has been associated with Jerry Green Dog Rescue since its inception and is still an active member of the board of trustees, remembers how the story began and how a twelve acre field in Wressle, near Broughton, was transformed into one of the first ever purpose-built centres for strays.

“It all came about because of a dog called Rusty,” explained Peggy. “When Rusty – a rescued spaniel – died, his owner Jerry Green decided to create a lasting memorial to the dog who had been his faithful companion for fourteen years.”

More than 50,000 people have adopted a Jerry Green dog over the last half century and more centres have opened throughout the region, including one at Algarkirk near Boston. By a happy co-incidence, the manager of this South Lincolnshire Centre, Lynne Vincent, is also reaching a personal milestone this year: her 50th birthday. To mark the occasion and to raise much-needed funds, Lynne has decided to take on a huge challenge – a fifty-mile sponsored walk from the North Lincolnshire head office to her own centre. She aims to set off on 9th April, arriving on her birthday the following day.

Lynne has been in training since last summer and the dogs are helping with her programme. She takes five or six different dogs with her on her walks, covering up to eighteen miles a day.

Another event planned during the charity’s anniversary year is a special outing for dogs and their owners as part of the Lincolnshire Wolds Walking Festival. “Walkies” will take place on Bank Holiday Monday, 30th May, starting at South Thoresby, near Louth.

Each centre is planning events throughout the year and the annual Open Day at the North Lincolnshire Centre on 10th July promises to pull in the crowds, as it is always a fun day out for all ages. Jerry Green Dog Rescue’s chief executive, David Foulds, is particularly looking forward to this. “Our fiftieth anniversary provides a great opportunity to celebrate the charity’s achievements. We have many challenges to face in the coming years and finding the money is a constant headache, particularly as the banking crisis has significantly depressed our income from investment.

“We hope our Golden Jubilee will be a bumper year, both for fund raising – it would be great if local groups and societies would adopt us as their special charity in 2011 – and for rehoming dogs. People who take on one of our dogs often find their lives are turned around. I think of us as a people rescue organisation too!”

Stories abound to support David’s view: the husband of an Alzheimer’s sufferer who is supported in his wife’s care because she adores the dog they adopted from Jerry Green’s. Or the lady who says quite simply: “My dog gives me a reason to get up in the morning.”

None of the charity’s income comes from state aid or Lottery funding. “We are very grateful for the contributions of our supporters, who are generous with their time and their donations,” added David. “We need them to help us manage the unending tide of unwanted dogs. Four or five dogs arrive at our centres each day, every day. They are brought here because of changing family circumstances or perhaps because the owners have lost interest in their pet. Sometimes we don’t know the history because the dogs are left tied to the gates, which is tragic.”

Whatever the reason, Jerry Green Dog Rescue staff and volunteers are there to provide love and hope. Every night, hundreds of dogs are tucked up in their beds, warm and well fed and, thanks to Jerry Green, tomorrow they may even find a new home.

For more information about Jerry Green Dog Rescue, including how to make a donation, please visit their website www.jerrygreendogs.org.uk or call 01652 657820.

WHO WAS JERRY GREEN?
A personal fiftieth anniversary tribute from Peggy Dornom of Wrawby, near Brigg, who knew and worked with Lincolnshire’s greatest canine benefactor:

‘Born into an ordinary working class family on 8th October, 1886, Jerry Green grew up to be a successful businessman. But it is in the field of animal welfare, particularly dogs, that he made a lasting impact, ensuring his name will be remembered for generations.

When still a young man, he went to London and entered the building trade. Property held a fascination for him and, with the first few pounds he saved, he decided to enter the market in a small way. Gradually his interests grew and he soon became recognised as an astute businessman and investor.

Always a dog lover, he was especially fond of his spaniel, Rusty. It was the loss of this faithful friend which prompted the idea of a charity to be formed for rescue dogs like Rusty. So, in 1961, The Jerry Green Foundation Trust was set up and, of all his achievements, this is the one which gave Jerry Green the most pleasure and pride.

He gave £300,000 of his own money to build the first centre, or sanctuary as it was then called, and it is sad that this was the only one to be built in his lifetime.

Jerry Green was a man with high principles; a man who did not suffer fools gladly. He had a strong determination to fight for what he thought was right. I am proud to have known him.’