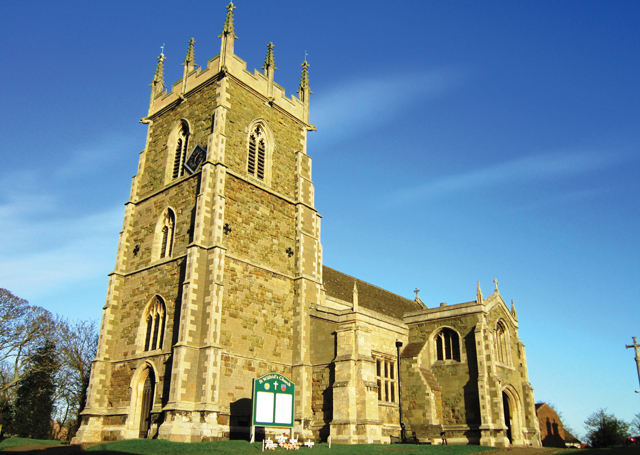 A centre for crafts

Alford is known for its craft market, fine working windmill and its connections to American history. The market town is also home to what is reputedly the largest thatched house in England. Alison Sandilands had a look around…
I stopped off for a hearty Lincolnshire breakfast at a quaint cafe in the Market Place before taking the short walk out of town to find Alford’s famous five-sailed windmill. As somebody who was visiting this market town for the first time, I must have stood out like a sore thumb when I asked a dumbfounded local for directions to the windmill. When they replied, ‘Which windmill?’ it became apparent that I needed to be more specific. You see, there are a lot of windmills in Alford. Not literally, I soon learned. There is the actual windmill, the one I was looking for, and then there is the Windmill Hotel and a whole host of other places with ‘Windmill’ in the name.

Thankfully, I was pointed in the right direction and made my way to East Street in search of one of the few working windmills left in Lincolnshire. While I cannot pretend to get overly excited about the inner workings of mills, I am a soft touch for pretty things. And this windmill is definitely pleasant to look at. I was not surprised to hear that it is often referred to as the finest windmill in England.

Visiting first thing in the New Year, the windmill and its premises were still and silent. Instead of spinning majestically, the sails were having a rest before the year gets into full swing. The onsite tea room, Millstones, was also closed meaning I was unable to sample the delights of delicious home-made scones with jam and clotted cream. But I enjoyed the peaceful location and took in different viewpoints of the picturesque windmill which was gleaming on this cold, blue sky day.

While the windmill is a rarity today, it was once joined by three others. As new modes of engineering were born, the traditional method of milling largely died out along with the majority of these structures. This one, however, has managed to find its place in modern times, having being restored to its former glory after Lincolnshire County Council took it on in the 1970s. It was originally built by local millwright, John Oxley in 1837 and passed on to a number of owners over the years, before falling into the hands of the county council. Today it is run by Ian Shepherd, who took on the lease two years ago and has gradually made improvements to the Grade I listed building.

“It is essentially three businesses in one,” explained Ian. “There is the milling, the mill shop and the tea room. I decided to acquire the lease as the mill is a destination for holidaymakers and I thought that a high street coffee shop was less likely to succeed.”

Ian said it had been challenging carrying out all of the necessary work, which included replacing the rotten sails last year after they had been out of action for eighteen months. “We are working hard to get everything back in working order and will then be in a position to mill our own flour again,” he said. “In the meantime, we have been selling flour from local mills at Sibsey and Boston.” Alford Mill is open to visitors and the sails turn whenever the wind is sufficient.

After the windmill, I followed the tree-lined road back into town and spotted St Wilfrid’s Church. Originally built in the fourteenth century, this attractive church has features from different periods, including a Jacobean pulpit, sixteenth century glass and a seventeenth century tomb in the chancel. In the latter years of the sixteenth century, the minister here was the Rev Francis Marbury. His daughter Anne, born in Alford in 1591, would go on to become one of the most important women in early colonial America.

Although the family moved to London in 1605, Anne returned to the town years later after marrying Alford tailor, William Hutchinson. They lived in the town for more than twenty years and had fourteen children. Like many puritans looking to escape the religious persecution of the times, they decided to chance the treacherous ship journey to the new shores of Boston, America. In 1634, they boarded ‘The Griffin’ and travelled 3,000 miles overseas. But instead of the freedom sought, Anne was met with much resistance from the religious leaders of the Massachusetts Bay Colony.

There was a lot of inequality and female preachers were forbidden. Anne went against this rule by setting up meetings at her home. She built up a large following from both men and women and was seen as a threat by the authorities who eventually labelled her as a heretic, took her to trial and banished her from the colony. Anne, along with her family and followers, found a new home at Aquidneck Island and also went on to establish the settlement of Portsmouth – both now part of Rhode Island. After William’s death in 1642, Anne moved to a Dutch colony of New Netherland, in New York. A year later, she and five of her children got caught up in a raid and were slaughtered by Natives Americans, who were retaliating following inhumane treatment by the Dutch.

Anne is remembered today in America with a memorial statue outside Massachusetts State House. At home in Alford, a memorial stone can be found in the garden behind Alford Manor House. This was sent ‘from the women of Aquidneck Island, Rhode Island’ and describes Anne as ‘spiritual leader and caregiver to women in colonial America’. Since Anne was well known for her work helping the sick, this memorial is suitably located near a plot of plants known for their healing properties.

Anne was not the only person with connections to the town who made a stamp in America around this time. Captain John Smith, who founded the first permanent English settlement of Jamestown, Virginia, in 1607, was educated in Alford. Thomas Paine, who played an integral part in the American Revolution, worked in Alford as an excise officer in 1764, at a time when smuggling was rife in the town. He was famous for publishing prominent books such as ‘The Rights of Man’ and held positions of government office, such the US Secretary for Foreign Affairs.

A rustic looking white door on West Street marks the entrance to what was formerly Anne’s home. Today it houses the Town and Country Antiques Centre. Directly opposite here stands Alford Manor House, which is believed to be the largest thatched house in England. This unique house, built in 1611, opened to the public in 2006 following a £1.7 million restoration project. The manor house has been looked after by Alford and District Civic Trust since the 1960s. In 2010, it was the turn of the gardens to be spruced up. New features included an orchard of Lincolnshire apples, pergolas and vegetable gardens. Produce from here finds its way into the tea room inside the Manor House. If you want to discover the interesting history of the house, it is due to open for the season on Valentine’s Day (14th February). Furniture and wall hangings from a seventeenth-century bed chamber will be among the items on display as part of the ‘Good Night, Sleep Tight’ exhibition. Fascinating artefacts from Alford’s past are also available to view in the Hackett Barn Museum, on the site of the Manor House, with bygone farming equipment and other nostalgic items.

While the town has an interesting history, an important part of its present is Alford Craft Market. At Easter, bank holidays, throughout the summer months and at Christmas, the Corn Exchange in the Market Place is filled with creative people for this staple event, which has become synonymous with Alford. A creative face of the town worth exploring is Alford Pottery in Commercial Road who are celebrating their fortieth anniversary.