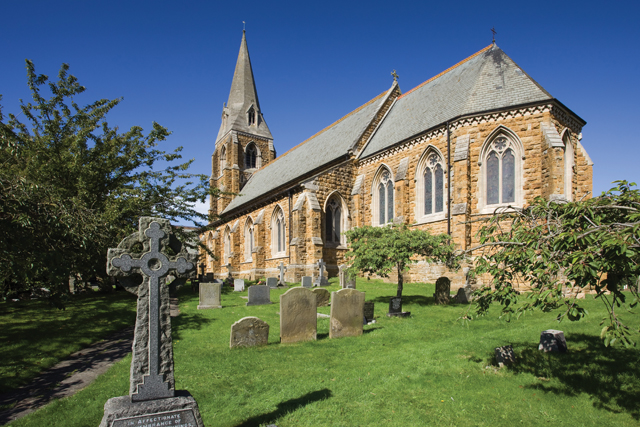 Drive through Binbrook on your way to visit the coast or an inland Lincolnshire market town and you miss the true character and strength of community that lies below the surface.
Binbrook is not only home to a population of about 750 people, with a vibrant community spirit; hundreds more people live in its ‘sister’ village of Brookenby, which was created out of the former RAF Binbrook site.

Binbrook itself comprises an interesting mix of buildings, from old cottages through to newer twenty-first-century properties. Many people have lived in the village for most of their lives, but its delightfully unspoilt nature has attracted younger families too.

Consequently, it is great to discover that this village – which lies ten miles from Grimsby and eight miles from Market Rasen – has maintained many of its essential everyday services.

These include the pub, doctors’ surgery, two shops, hairdressing salon, garage, a butcher’s shop, Chinese takeaway and a post office.

In addition, there is the Binbrook Church of England Primary School and the village still has its own fire station.

All are highly valued by locals and families in nearby hamlets, because the nearest larger centres are Grimsby and Market Rasen.

There is a wealth of community groups offering something for everyone, whatever their interest. From art to photography, gardening to bingo, villagers are well catered for.

The Binbrook WI meets regularly and there is a Binbrook Activity Night Club. Places to meet include the Village Hall and village Reading Room.

Binbrook also has its own Wolds Community Minibus, which is available for hire by local groups.

Parish Clerk, Bev Preston said: “What is special about Binbrook is its community spirit. The fact that the village still has many of its own services means that we can serve local families and also catch passing trade.

“My husband, Frank, and I have run Preston’s Butchers since 1984, when we took over from Frank’s parents. The business has been in the family for about forty-five years.”

Situated overlooking the Market Place, Preston’s is ideally placed to see the comings and goings in the centre of the village, but in addition to providing locals with quality cuts of meat (plus fresh bakery items, vegetables and even bird food!) Frank also does deliveries in the area and is even known to drop off medicines and other essentials to people living in the outlying villages.

Binbrook businesses and firms based on the Brookenby Industrial Estate help to provide local employment.

The village used to have two pubs, The Marquis of Granby, which closed and was converted to a house some years ago, and The Plough. It re-opened about eighteen months ago, after being shut for roughly eighteen months.

“During that time the Village Hall Committee took action and set up its own volunteer-staffed pub Ye Mended Drum. This ensured we could still enjoy a pub-style facility and it enabled money to be raised towards the upkeep of the village hall and to provide activities for young people, such as the Wednesday KidsClub and Youth Drop-in Centre, as well as various other good causes throughout the village,” said Mrs Preston.

“The Binbrook Church of England School includes a Children’s Centre, catering for tots from birth through to the age of four, who then move into the school’s reception and other classes, staying there until they are eleven years old. We are proud that the school recently received a ‘good’ Ofsted report.”

The village lies in an Area of Outstanding Natural Beauty (AONB), so it is no surprise to learn that it is popular with walkers and cyclists. However, Binbrook no longer has a tearoom, so the Parish Council is looking at creative ways of offering an alternative.

“As a progressive village, we want to maintain and build up the community involvement in meeting the needs of our visitors, whether they arrive by bike, on foot or by car,” said Mrs Preston.

The Government is eager to encourage mutual support between local armed forces personnel and civilian communities to promote a better understanding of the issues faced by people working within the services.

The Community Covenant Scheme makes grants available to assist with this and this is also being explored by the Parish Council.

RAF Binbrook was once home to 460 Squadron Royal Australian Air Force and Australians and New Zealanders often visit the village.

“We would like to get the Remembrance Book relating to this squadron housed in St Mary’s and St Gabriel’s Church, where there is an appropriate chapel. An exhibition could also be staged in the chapel,” said Mrs Preston.

Interestingly today’s church is an amalgamation of Binbrook’s earlier churches. When the village was a large market town the community was based in two parishes and each had its own church – both sited very close to each other.

By the 1840s St Gabriel’s was a ruin and sadly St Mary’s was not much better. Subsequently, the two parishes became one, resulting in today’s St Mary’s and St Gabriel’s, which was built on the site of the former St Mary’s. Designed by James Fowler, and consecrated in 1869, it is referred to as the ‘Cathedral of the Wolds’.

A close relationship between the parish and RAF Binbrook led to a window being dedicated to the church when the RAF Station closed in 1898. This stained glass piece was designed and made by Lincoln artist, Glenn Carter.

Parish Councillor, Pauline Bacon has ensured that an iconic example of British architecture in Binbrook, a telephone box, has been given a listing by English Heritage.

After a fairly lengthy procedure, the K6 telephone box in the Market Place is now ‘listed’ and will remain standing proudly in the middle of the village. The K6 phone kiosk was designed by Sir Giles Gilbert Scott in 1935 and is synonymous with telephone calls of a bygone age.

Cllr Bacon said: “The phone box where we lived previously was listed. When I saw this one wasn’t, I thought it was important to apply.”

English Heritage said the Grade II listing was given as the box is ‘an iconic C20 industrial design’ and it has ‘a strong visual relationship with two Grade II listed buildings – the village pump and Manor House wall and gate piers.’

PLENTY GAINED FOR NEW VILLAGE
Brookenby came into being in the 1980s and is based around the former RAF Binbrook station. Most of its residents live in former aircrew housing.

However, there the similarity ends as this village is up and coming and developing a character all of its own.

The name of Brookenby is believed to be the name of an abandoned or plague village, which once stood close to the present site. So from plague village to RAF Station and now home to a ‘new’ community, it is clear that history abounds in this part of the Lincolnshire Wolds.

RAF Binbrook opened as a Bomber Command station in June 1940 and was home to 12 and 142 Squadrons from July 1940 to December 1942. Then it closed for the installation of three concrete runways, re-opening in 1943, as the home of No 460 squadron, Royal Australian Air Force (RAAF 460).

The RAAF 460 squadron went on to fly more missions and drop more bombs than any other branch in Bomber Command but sadly also paid the price, tragically suffering some of the heaviest losses.

Obviously, this new allocation brought in a large influx of Australian airmen into the small village of Binbrook but this amalgamation of communities worked and to this day a special bond remains.

Early post-war saw the base being used by others, including 9, 101 and 617 squadrons.

RAF Binbrook closed as an operational base in the late 1980s – but amongst its many claims to fame are its use as the backdrop for the 1989 version of the famous film Memphis Belle.

However, its historical importance lives on today, thanks to the RAF Binbrook Heritage Centre, a two-acre site in private ownership, which provides a fitting memorial to the bomber crews lost during the wartime years.

Ray served for seven years in the Royal Observer Corps and became the Chief Observer for Lincoln 17 Post with Royal Air Force Station Binbrook being his ‘home’ station.

Ray acknowledges that having a passion for preserving one’s heritage – whether that be a castle, stately home or RAF memorabilia – is hard work.

He also feels that everything found on a site is part of its history and, in the case of RAF Binbrook, that includes a pair of 1961 wellingtons! So, there’s no question about how passionate Ray is about this area.

Work is still underway, but people are very welcome to visit and they will be rewarded with the sight of two Lightning jets and a small museum display housed in a portable building.

“It has been a long, hard struggle, often against impossible odds, to get this far but a sheer pleasure to save and preserve such a great part of our aviation heritage. The future of these historic aircraft must be preserved at all costs,” said Ray.

Recently, visitors have travelled to the Heritage Centre from London, Manchester and Southend. Other people travelling large distances may like to contact Ray first on 01472 398739 or 07580 884536.