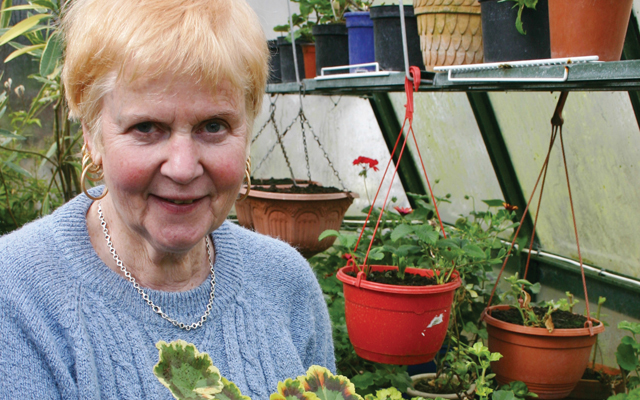 A hobby which started when she was just a tiny tot has led to a fantastic career as a gardening expert spanning more than forty years, but Daphne Ledward still insists she doesn’t have ‘green fingers’.
A regular on Gardeners’ Question Time and numerous other television and radio shows, Daphne now concentrates her time on her own gardens, in Surfleet, near Spalding, while spending what few hours she has left writing for magazines and newspapers, looking after her beloved dogs and undertaking charity work.

It was after forays into several different careers, including jobs as a quantity surveyor and social worker, that she decided to take the plunge and start up her own landscape gardening business.

The great outdoors and gardening have always played a part in Daphne’s life; she recalls her interest started as young as three years old, when her father returned home one day with an assortment of flower and vegetable seeds and involved her in the preparation and planting of a small bed.

After her parents separated, a young Daphne took responsibility for looking after her mother’s house and garden in Stamford while she was out at work, and is adamant that it all boils down to a bit of common sense and a basic biological knowledge.

She said: “My mother worked all the hours God sent and all the other, necessary, stuff was left to me. But even now gardening is still my hobby and my passion; I still enjoy tending to my own patch. I was always quite happy to get home from work and then go out and get stuck into my own.

“It’s just the satisfaction get from seeing things grow. But to be honest, I don’t think there’s any such thing as green fingers; if you’ve had a decent biological education at school, and understand botany, you’re well on your way. If you go and stick a house plant on top of a television where it’s hot, it’s not going to thrive – and a lot of people do not think about how these things work.”

Daphne really broke into her new career after undertaking a correspondence course and several holidays working at local nurseries.

Her original intention was to design gardens for her clients to construct and plant themselves, but she soon found that most people wanted the whole job done from start to finish, and it wasn’t long before she became proficient in demolition, paving, turfing, rotovating, concreting and all the other things involved in landscaping and maintenance.

“There was just no future in the social work I was doing at the time – so I decided to make my hobby pay,” she added. “At the time it was a sort of relaxation.

“It was hard work, especially since I didn’t want to take on any staff, in case I couldn’t afford to pay them.”

Her television and radio career began in 1980, quite by accident when Daphne joined the newly opened BBC Radio Lincolnshire voluntarily as a gardening expert and ended up working as a presenter when she was put forward for Gardeners’ Question Time, where she was the first female panellist.

This was followed up by regular appearances on other television and radio shows including The Jimmy Young Show and Classic Gardening Forum and it was from here that she picked up some high-profile clients including cricketing legend, Geoffrey Boycott.

In 2001 Daphne presented her own television series, Garden Hopping, which she describes as the gardening equivalent of Antiques Roadshow and Gardeners’ Question Time, where she and husband John, accompanied by their dog, would travel around the country in a caravan stopping along the way to answer gardening queries. The programme is still regularly shown on BBC2, UKTV and is also being screened in America.

Her presenting work put Daphne in great demand as a magazine writer and over the years she has also penned numerous books, including many titles for Readers’ Digest and Ask – a collection of the 1,000 most asked questions about gardening, with answers clearly spelled out in her own no-nonsense style for both the experienced gardener and beginner. It looks at everything from identifying soil types to choosing tools and dealing with pests, the latter of which she is most frequently questioned about.

“I always seemed to get asked a lot of unsolvable problems – the main one being how to deal with moles, and also slugs,” she said. “The truth is you’ll never totally get rid of them and it’s bad for moles this year because of all the rain, the ground is so moist, and they’re causing havoc in people’s gardens.

“The other thing is questions relating to pruning; people think they’ve got to do it and they get concerned about how much etc. But in truth, when in doubt, don’t do it!”

Daphne’s lifetime passion for gardening has not diminished since she turned her hobby into her career and she still takes enormous pleasure from her own cottage garden and another five-acre field, where a few miles away she has an orchard, greenhouses, experimental vegetable garden and where she’s also establishing a native wood, small wildflower field and arboretum.

At present Daphne’s time is spent on various writing projects, including a weekly newspaper column, and lectures to clubs and societies on a wide range of gardening issues, although once the weather improves she will be back full-time in the garden, which she has previously opened up to the public for charity.

Having raised thousands of pounds for various causes over the years including Boston’s Pilgrim Hospital and Cancer Research, Daphne is holding a Teddy Bears’ Picnic at her woodland area, The Patch, on 8th June, where visitors can go along, take their own picnic, enjoy the surroundings and help raise money for Fen Bank Greyhound Sanctuary, another cause close to her heart.

Despite her aspirations to become a vet being thwarted during her teens, Daphne still loves to be involved with animals and is patron of the centre, based at Friskney, near Skegness, which rescues, rehabilitates and re-homes ex-racing greyhounds.

Daphne and John currently have five, including Mr Muffin, who recently hit the headlines for saving the life of another dog in Switzerland, at the end of last year.

Three of Daphne’s pets regularly give blood through the Pet Blood Bank UK, which is the UK’s first national canine blood donation charity collecting, processing and storing blood products used to save the lives of hundreds of dogs every year through transfusions and operations.

Thanks to his donation, Mr Muffin was able to save the life of Blackie, who was critically ill with kidney and liver failure caused by deadly Weil’s disease.

* To find out more about Daphne, her work and fundraising efforts, visit her website at www.daphneledward.com