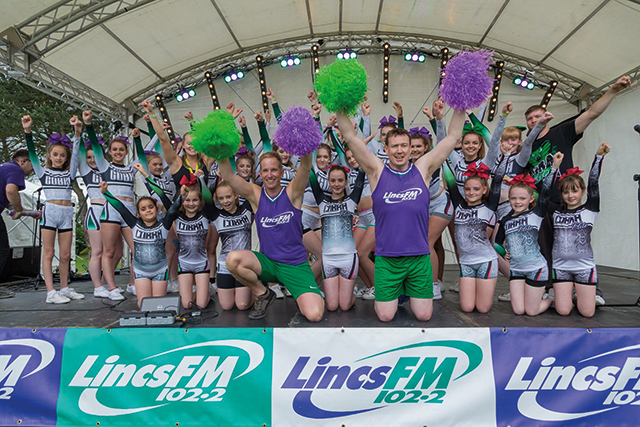 A dash for cash

Showstopping summer ahead for Lincolnshire and Newark’s most listened to radio station.
Summer’s here and although you can’t rely on the weather, you can rely on Lincs FM to put a smile on listeners’ faces over the coming weeks.

The station has launched its latest competition, aptly named Cash Dash – giving cash to those who dash, literally! Every Wednesday, until early July, the team are out across the area turning up and surprising those of you who have registered to play. The Lincs FM Cash Dash car could park just around the corner from your home or place of work – or even the bingo hall, if that’s where you go on a Wednesday – and, once the car’s location and your name are mentioned on the radio, you’ll have just ten minutes to dash for the cash. Get to the car in time and you win the £100. If you haven’t registered yet, there’s still time, by visiting the Win page of the Lincs FM website.

The Cash Dash follows on from last summer’s successful Spread A Little Sunshine, in which listeners were surprised by the station’s presenters, buying them lunch, paying for their entrance to tourist attractions and even their train ticket.

Lincs FM programme manager Sam Heywood told Lincolnshire Life: “We love surprising our listeners and we know our listeners love a surprise. Last year’s Spread A Little Sunshine proved hugely popular and we wanted to do something like it again this year but, rather than us just tapping you on your shoulder and giving you a treat, we wanted to make you work for it this year. Obviously, we won’t park the Cash Dash Car too far away – we don’t want you too out of breath. Just far enough away to make you feel you’ve earned the money.”

June’s a busy month for Lincs FM, as ever, with the Lincolnshire Show also taking place. The station is again hosting its annual Showstopper events on the Lincs FM Stage, near the Countryside Area at the showground. Last year a Michael Jackson impersonator, choirs, singers and dancing dogs were among the highlights.

Sam has joked: “This year, we’d like a dog, dancing to Michael Jackson!” To find whether her wish comes true, you’ll have to visit the stage during the two-day event at the Grange De Lings Showground. The Lincs FM presenters are also planning to take to the stage again as well, though at the time of going to press, were still considering their options. Previously, they’ve played in their own band, have been cheerleaders, and joined the Butlin’s Red Coats so who knows what they’ll have up their sleeves for this year’s Show.