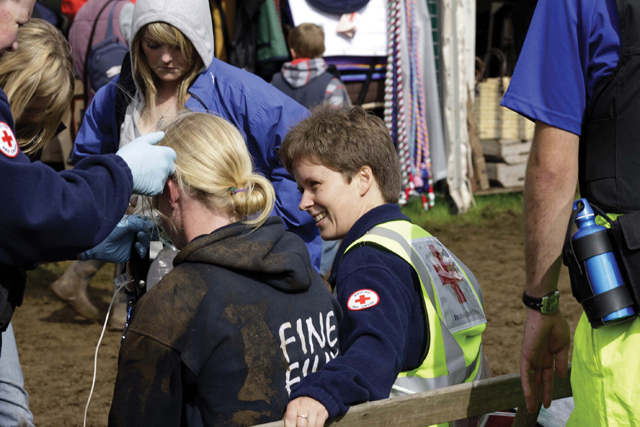 Dr John Inman, Chief Medical Officer (CMO) at The Land Rover Burghley Horse Trials initially worked at Burghley when he was a student, selling programmes in the car park. “In those days there were girls in red and gold uniforms promoting Gold Leaf cigarettes – totally unimaginable now, as then was the thought that I’d come back to Burghley,” said Dr Inman.
Not only did he come back – he stayed and this year was his twenty-fifth as CMO, responsible for the co-ordination of all medical services at the event.

“There are two obvious big things going on: the competition and the crowd but we are also responsible for trade stands, the stables and the caravan park, all of which amounts to quite a large residential population for the week,” said Dr Inman whose regular day job is being a practising GP in the Leicestershire village of Syston.

His usual population of patients is a fraction of that of Burghley, where the number of spectators alone was equivalent to a small town. Attending to their medical requirements was the largest aspect of the job and the doctors were supported by The Red Cross and St John’s Ambulance which provided the main First Aid cover and ambulance support.

Dr Inman said: “Many of these volunteers already have substantive NHS posts such as Accident and Emergency nurses or paramedics and we had a range of trauma specialists on site meaning there was a high level of skill mix and people could be confident that, should they have needed it, they would get first class treatment.”

The types of problems usually dealt with were weather related. “If it’s hot the most common problem is dehydration, if it’s wet then people tend to slip over and subsequently we see more strains and bruises,” explained Dr Inman, whose team had to be prepared for very different medical challenges out on the cross-country course. The combination of galloping horses and solid obstacles can, if it goes wrong, have serious consequences for the rider. Four mobile units, each with a full set of skills, tended immediately to any incident and a helicopter was on standby – Burghley was the first to deploy a helicopter and it is a now a requirement for any major event – as is an NHS specification ambulance.

“We have the facilities to deal with all eventualities – however, most riders had clear rounds and despite some awful looking falls the helicopter stayed on the ground,” added Dr Inman.

The job of CMO takes more than just a week at Burghley however. Over the year Dr Inman recruits doctors from local practices as well as Peterborough, Leicester and Nottingham hospitals although those with particular equestrian medicine skills come from further afield. The week before the event the doctors attended a training day to familiarise themselves with equipment.

“Field medicine is constantly changing and the event benefits from many techniques and doctors that have come out of Afghanistan which have made a valuable contribution to trauma medicine,” said Dr Inman who places great importance in the planning and on-site preparation. “Everything had to be in place well before the event started especially as once there were crowds, moving about was complex as well as potentially hazardous,” said Dr Inman. Fortunately he knows the park well, not only due to being in post for many years but as a child he grew up in Stamford and played in the park with his sister Elizabeth – now the director of the trials.

Although Dr Inman was made CMO at Burghley by former director Bill Henson it was, however, Elizabeth who originally enlisted her brother as an events doctor when he returned to the area after ten years spent working in Yorkshire.

“As she was interested in all things equestrian, she got me involved at the local point-to-points,” explained Dr Inman who doesn’t share his sister’s love of horses. “I don’t ride, as basically I’m terrified. I did it once for a while as I do believe you need to experience what it’s about but I just felt so ill at ease that it was short lived – I prefer cycling and sailing.”

Having a sister heading the event does have advantages: “It is useful to have direct line to the top and vice versa although I have to watch I don’t overstep the mark. But I have now been there so long, as have so many others, that for me and my team much of the job is second nature to us – and my connections aside, Burghley always has a real family atmosphere.”