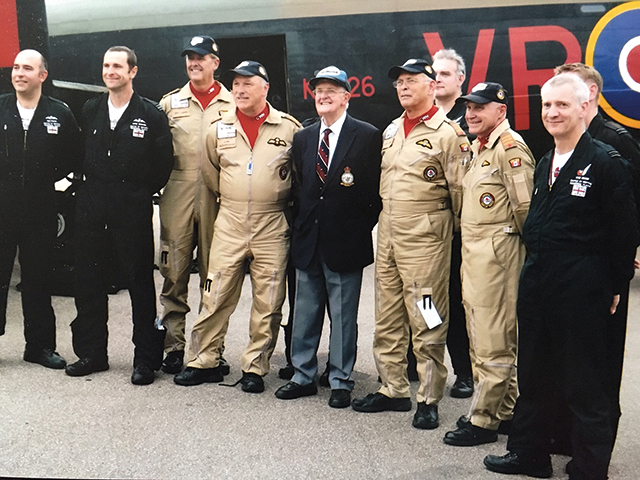 Flight Engineer Sergeant Syd Marshall, one of Lincolnshire’s ‘Bomber Boys’, sadly died in December 2017, just before the opening of the International Bomber Command Centre. His family talked to Penny Wainwright to share their father’s remarkable story.
Syd Marshall was born in Boston on 25th March 1924. As a young boy he loved finding out how things worked and making model aeroplanes with elastic band propellers. With an interest in planes he joined the Air Training Corps at the age of 12. Leaving school at 14, Syd became an agricultural engineering apprentice in Boston. By 18 Syd began to wonder why he had not been called up, but he was in a reserved occupation and was exempt from service.

Syd decided to volunteer and was accepted for aircrew duties. Although Syd hoped to be a pilot, he became a flight engineer because of his experience. Syd went to London in January 1944, to the Aircrew Reception Centre at Lords Cricket Ground and once enlisted spent three weeks training in London.

Initial training in wintry Bridlington involved getting fit on the beach and doing drills along the seafront. Lectures in the Spa were with Corporal Horrocks. Syd told his family, “You can guess what we called him!”

Flight Engineer training took place in St Athan, South Wales for seven intensive months. On 12th July 1944 Syd qualified as a Flight Engineer and was promoted to Sergeant. Looking at his training notes his daughter Frances commented: “When I look at these I can’t believe my dad wrote this and had to learn all of it at only 18.”

A Lancaster crew consisted of seven men. Syd described how he joined his crew at Boston Spa: “I saw a man sitting at the side and went across to him asking ‘You ok?’. He replied ‘Yeh, you? I’m looking for a crew, what are your skills?’ When I told him he said, ‘You’re the man for me. I’m the pilot, come and meet the rest of the crew.’”

This was Syd’s first and only crew. The three Canadians and four British men became very close. The pilot, Luke Morgan, Lou, was like a brother to Syd and and they kept in touch every Christmas.

In 2008 the BBC’s Inside Out programme heard about Syd and Lou and wanted to film their reunion, so Lou was flown 4,000 miles from Calgary to Coningsby. They spent a few days together visiting Elsham Wolds, Scunthorpe and Coningsby. When they flew together in a Dakota alongside a Lancaster over Lincolnshire, Syd said: “If I live to be 100 I’ll never forget it.”

The crew were posted to 103 Squadron Elsham Wolds, near Scunthorpe. Their first operation was on 14th October 1944 to Duisberg. Their Lancaster was one of the 1,005 planes taking part. Over the target their plane was hit and the port inner engine caught fire. They all followed the fire drill and got home on three engines. As Syd told his family, “Well it was the last thing we learnt so we knew what to do and did it.”

After thirty-six operations they had completed their tour, having flown for 226 hours day and night.

Syd returned to his old job in 1947 and married Marion in 1949. Syd later worked on a farm in Old Leake. Sundays were spent with his wife and five daughters, Sherrin, Shirley, Lesley, Frances and Patricia going on picnics, to the seaside or to East Kirkby airfield to fly model aeroplanes which the girls ran after.

Once retired in 1991, Syd became a volunteer at the Battle of Britain Memorial Flight at RAF Coningsby. As Syd’s daughter Lesley says: “Dad was an amazing guide at the BBMF.” He showed people round and shared stories of his RAF experiences for twenty-eight years.

Syd and daughter Frances went to London in June 2012 for the dedication of the Bomber Command Memorial. Frances told me: “He was thrilled that Bomber Command had been recognised at last. He said, ‘It’s all there, every fitting detail, true to life, it’s wonderful.’”

The BBMF arranged for Syd to fly in the Canadian Lancaster VRA, or Vera, when it came across in September 2014. Syd wore Lou’s Canadian Warplane Mynarski cap on the flight in memory of his good friend. The British and Canadian Lancasters flew side by side over the Derwent dams before landing at RAF Coningsby.

Frances said: “Dad didn’t know why he had been chosen but my goodness he was glad to fly in that Lancaster sixty-nine years after his last operation and to see dad’s smile when he climbed down those steps from the Lancaster was a sight to behold.”

Syd took his log book with him containing a record of all his training flights and operations, to have this flight added by the crew of Vera. For Syd, receiving his Bomber Command Clasp added to the memories of the day.

Hearing of an International Bomber Command Memorial in Lincoln, Syd was excited to become involved. Nicky Barr, chief executive of IBBC, spoke of his involvement saying: “Syd played a really important part in the history of the project. He spoke at the launch in May 2013 and unveiled the Spire design for the memorial.”

At the launch he talked about being in Bomber Command and in the Lancaster as a Flight Engineer. His daughter Patsy said her Dad likened flying at night to driving on a motorway at night with no headlights on the cars (“It was quite exciting and ruddy dangerous”).

The family of Syd Marshall will be attending the opening ceremony of the International Bomber Command Centre, as it meant so much to Syd. Money collected at his funeral has gone to the centre and the family are hoping to buy a stone in his memory, which will be on the avenue to the centre. Syd’s collection of memorabilia, which the family hold, will be recorded in the archives at the International Bomber Command Centre, along with a digital archive of the history project interview. All of his family are proud of him and honoured to have had him as their Dad, Grandad and Great Grandad.