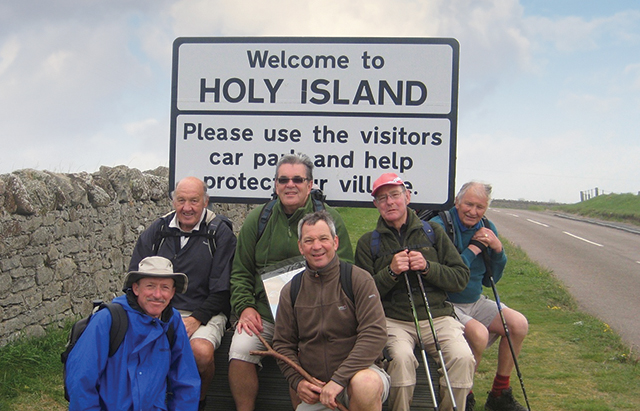 A flock of ‘wild’ walkers

When John Thorpe invited a few companions to walk the coastline of Menorca with him, he could never have imagined what an impact it would have on their friendships, or that they would still be planning walking adventures together some 20 years later, as he explains to Kate Chapman.
The group of fifteen, who mostly live in Lincoln and its surrounding villages, are all friends and acquaintances made through activities including tennis, rugby and cycling – and who all have a common passion for rambling.

Hailing from all walks of life, the group, who range in age from mid-60s up to 81, have nicknamed themselves the Wild Geese – in homage to the Richard Burton and Roger Moore film about a group of mercenaries who come out of retirement for one last mission.

Since 2000, their travels have taken them across Great Britain, as well as into Europe where they have walked through areas of France, Portugal, Ireland and Corsica, cementing their friendships along the way.

“We have a great time,” says retired dentist John, “we have lots of laughs – especially when things don’t always go as smoothly as we would like.

“Some of us are a little creakier now, but the walking is great exercise and spending this quality time together has really made our friendships stronger.”

John, who owns a holiday home in Menorca, set the ball rolling back in May 2000 when he decided he wanted to walk the circumference of the island before waymarks were put in place by the local authorities.

Although he’d travelled around Menorca many times by motorboat, appreciating its rugged and varied 216km long coastline, he had never tackled it by foot.

He invited five friends to join him on the route which was planned out with hotels and villas to stop in each night. The group had such a good time that they, along with a few more comrades, returned the following year to take on the island’s more challenging northern coastline too.

“I knew that once signs were in place, walkers would come to the island in great numbers to follow what would quickly become well-defined paths,” said John, recalling the Wild Geese’s first walk.

“We set off from my house on the south coast and although I’d already done a recce of the first 20km we did get lost a few times, as keeping the sea on our right-hand side was not always an option!

“We came across farmland and a military establishment that made us head inland, and at this point we didn’t have Henry Denchfield who is trained in navigation with us, nor a compass.

“So we did get ourselves lost, in fact one day we ended up walking 24 miles and arrived at our hotel at around 8pm absolutely shattered.

“But all my friends thoroughly enjoyed it, so we decided to return the following year to do the north coastline, which we found very tough in comparison; there were no hotels and it was difficult to get supplies. We started to run out of water and were getting dehydrated.

“In the end we had to call the schooner which was collecting us to ask if it could come a day earlier as we were suffering. The experience didn’t put us off though.”

The annual hike soon grew in popularity among John’s friends, and as the group became bigger, members started tapping into each other’s knowledge of good walking destinations both at home and abroad.

Bill Thompson, who took part in the original walk, picks up the story: “Some of the other lads also had holiday homes in France, Portugal, Ireland and Norfolk and were kind enough to offer these as bases and their local knowledge.

“I was a member of a rambling club that had hostel accommodation in North West Wales and Cumbria, so these were chosen as other destinations, while another member had holidayed regularly in Corsica, so we went there as well.

“We have great camaraderie and some of the walks have been very educational too, it’s great exploring all these other wonderful places together.

“A favourite of mine was the whiskey trail through Speyside, when a number of distillery visits were included in our itinerary, while following St Cuthbert’s Way to Holy Island was another memorable trip; here we had to reach the coast before the tide came in and blocked our crossing to the island.”

The group’s UK jaunts tend to last four or five days and have included the Dales Way and the Cleveland Way. Some of the Wild Geese are also members of a Lincolnshire based rambling group and often walk the pathways and trails around the Wolds, particularly Tealby, Tetford, Bradley and Ashby as part of their training for their other expeditions together.

“Of course, not everything has always gone smoothly,” adds Bill. “In Majorca, local police impounded our illegally parked hire cars one year, so that proved an expensive trip.

“Another unfortunate mishap occurred in Menorca when one of the team lost his false teeth while water skiing – this was on the first day of the trip, so he had to go without them for the rest of the week, which meant he ended up missing out on some very good steaks!

“And Corsica was interesting too – we caught the train to take us up through mountains to our hotel. At the outset, we were in shorts and T-shirts but an hour later, after passing through a long tunnel, we disembarked in a snow blizzard – looking very under dressed!”

The Wild Geese visited the Spanish Alpujarras in 2019 to tackle its formidable heights of up to 1,200m, with further trips to Spain planned for this year when they are hoping to visit Valencia.

“We are an ageing group, but we just want to keep on going – we walk a fair way, we’re not just sitting in bars,” adds Bill. “Obviously some of us are getting older, but we look at the routes beforehand and everyone knows their capabilities.

“We have to be fair to our families too – that’s why we tend to have just one main trip a year, but we do have some fun together and it’s all good for the mind and the body.”