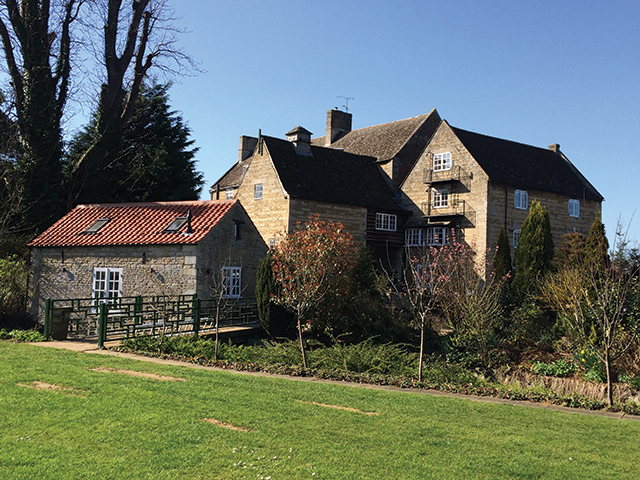 A getaway retreat in a heritage home

County buildings with a fascinating history have always been featured in Lincolnshire Life.
Molecey Mill, a historic landmark in the village of West Deeping, first appeared in our pages in 1966.

Last month we told the story of the Molecey family. This month we are featuring The Granary and the recent renovations which have transformed that part of the mill into a country retreat ideal for family get togethers, weddings and tranquil breaks.

The stone in the gable end of The Granary inscribed with the date of 1773 is clearly visible from the Stamford Road and Canal which pass the house. This was the year in which trade was so prosperous that John and Eleanor Molecey added the large granary store over four floors to adjoin their water mill. Huge oak beams were used to support the first two storeys serving as a warehouse and working building feeding grain to the millstones via a chute on the third floor.

Current owners, Graham Magee and Glenn Fuller, bought The Granary in 2015, partly as a weekend retreat from their busy working lives in London but also as a project to restore a heritage property.

“We came back several times to view The Granary,” said Graham. “The mill had been split into two properties in the 1980s. The interior had a series of partitioned rooms and very much an interior scheme of that time. We could certainly see the potential and the scale of the work was going to be huge but we kept being drawn back to this wonderful rural setting of the mill pond and water courses.”

The Granary is positioned with water on two sides; the River Wellend and the banks of the Stamford Canal with the grounds and gardens extending across twelve acres, intersected with footbridges, streams and a small magical island.

Graham has researched not only the family history but also through documentation and anecdotes the evolution of the property from commercial enterprise to family home.

“When Mr and Mrs John Van Geest owned the mill from the 1960s to the 1980s, Mrs Van Geest used part of what is now our dining room as a garage. There is a description in a magazine of her parking her 1922 Wolselsey and TVR there.”

The mill pond, with a pair of resident swans, is on the doorstep of The Granary linked by a wide terrace to the water wheel, old mill house and disused dovecote which belong to the neighbouring house, close to the kitchen entrance.

The vision that Graham and Glenn had for The Granary was to restore the property’s links to its industrial past while engaging as many local artisans and craftspeople to undertake the work.

The kitchen is spacious and dominated by one of the huge oak beams inscribed with the name Thos. Edfis 1781, the carpenter who worked on the original building, now picked out in gold. “We have revealed several more inscriptions as the restoration was progressing. Some are casual graffiti etched by idle hands but others have more intent. We believe one may be a protective mark against witches.”

In the kitchen there is a large range cooker and a large American style fridge freezer, both suitable for a house which can accommodate up to fourteen guests in its six bedrooms. Next to the kitchen is the large dining room with exposed beams, an extending large refectory table which can seat up to sixteen and views to what would have been the landing dock for the barges and boats delivering and collecting from the mill. A former doorway was revealed when stonework began to be exposed.

An elegant, contemporary staircase with glazed panels has been installed between the floors. “We removed the partitioning on the first floor to open up the original width of the space. The glazed staircase gives an uninterrupted view across the loft style sitting room we have designed.”

This is an ideal space for hunkering down into the comfortable sofas and enjoying the wide screen and surround sound Glenn and Graham have installed. Throughout, the décor is country house meets ski lodge with a mixture of vintage artefacts and furniture which Graham sourced from local sale rooms and auctions during the last couple of years.

Five of the bedrooms have king sized beds while the twin bunk room is ideal for children. There are also two pull out single beds in one of the double rooms which make a perfect family room. In addition there are four bathrooms, three with showers and the fourth with a bath and shower.

Each room has an individual theme and name to complement its styling. St Andrews is named after Glenn’s former university while Graham’s alma mater is acknowledged with Cambridge, a room in a Farrow and Ball soft blue and rowing theme.

Local designers and makers such as Sophie Allport and Creative Touch Upholstery have added luxury and country inspired motifs to soft furnishings and furniture. Glenn and Graham run an art gallery in London so the walls of The Granary are hung with eye catching pictures and artworks. One area in the sitting room features framed historical maps and documents relating to the mill.

As you walk up through the building, the babbling water of the mill stream can still be heard through open windows and makes a relaxing backing track to the luxurious interior.

On the third floor are two bedrooms built into the sloping timbers of the eaves. In one room a chimney breast (well sealed) is still home to a nest of bees, a location recorded as far back as the first half of the last century. In the bathroom on this floor the top of the grain chute was hidden behind a wall panel but is now revealed and featured, lit behind glass.

Outside, the Granary is a playground for wildlife and humans alike. The waterways and gardens lend themselves to pond dipping, kayaking, bird watching or a game of cricket. “The events which could be accommodated here range from weddings and private family gathering to corporate days or photoshoots. It would also make a captivating film location.”

Glenn and Graham have certainly brought The Granary firmly into the 21st century while still enhancing it glorious industrial heritage.