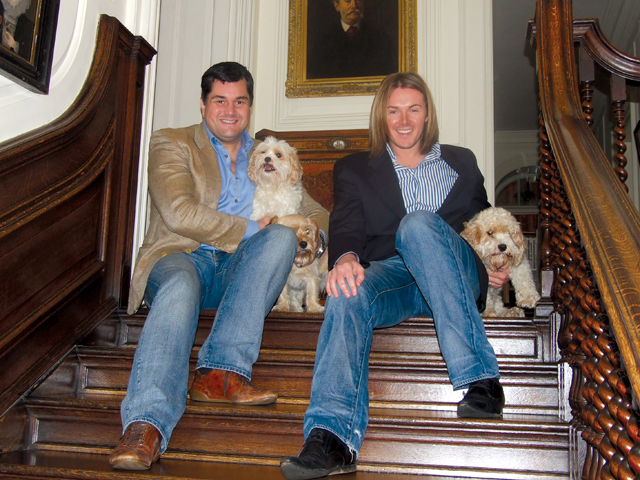 A handsome town house… in the country

Gunby Hall has new residents who already feel the house has become their home. Caroline Bingham went to meet them to hear about their exciting plans for one of the county’s finest country houses.
Colin Shenton and Gareth Harold are both successful businessmen but they knew that their commitment to become the new residents at Gunby Hall was not to be undertaken lightly.

I met them in the elegant drawing room overlooked by family portraits, works by Sir Joshua Reynolds and many pieces from the house’s fine collections, by other famous names including Tennyson, Kipling, Samuel Johnson and William Morris.

“I first saw the house in Country Life,” said Colin, “and I immediately contacted the National Trust to book a viewing. It would have been easy to have said yes as soon as I saw Gunby Hall but I held back because I know it is something that you really want to do when you accept this type of long-term commitment.”

Both Colin and Gareth are from the north west, have business interests in property and HR respectively, but had rarely been inside Lincolnshire prior to their first visit to Gunby.

Now very much the Shenton family’s private home, the earliest parts of the house date from 1700 but was gently extended and added to over the next 150 years and the beautiful gardens were laid down predominantly in the 1920s. The house is still closely associated with the Massingberd family, who lived on and farmed the adjoining estate from the fifteenth century until 1967. Gunby Hall came under the ownership of the National Trust in 1944 and has since been handsomely maintained by successive long-term tenants.

Despite its grand town house façade, the interior has the warmth and charm of a genuine home rather than a draughty, stately mansion and the nine acres of grounds and walled gardens offer a different perspective every month of the year.

The selection process, which saw Colin and Gareth chosen from a final shortlist of three couples, lasted more than six months. But with an inventory of over 7000 items and an estate that has never been self-sufficient it was necessary to find new leaseholders with deep enough pockets and secondly an ambitious business plan that will put Gunby Hall on a sound and sustainable footing. I asked them more about those plans.

“We took the approach that this was to be very much a joint venture with the Trust,” explained Gareth, “and we undertook detailed research of the locality, the house and its potential so that we could identify how we can make the house pay its own way.”

Since signing in April this year, their innovations have already shown positive results. They told me that they have worked to raise awareness of the house among local holiday providers and opened the house, gardens and tea room more frequently. Fresh cakes, soups, scones and produce are proving very popular and their visitor count will already exceed last year’s.

The Hall came with an existing brigade of staff but this has been bolstered by a new general manager and an events manager. The business plan included opening the house for civil wedding ceremonies, receptions and events and Gunby will be holding their first Wedding Fair on September 11th. The first wedding is already booked and they will welcome the couple later this year. The house is available to use until 6pm in the evening after which celebrations can continue in a marquee on the lawn, or in the future in the coach and carriage house, for which plans are underway to be converted into a function room.

Two full-time gardeners are supported by seventeen volunteers and Colin and Gareth would like to recruit more. “The gardens have a different story to tell throughout the year and we want to recruit another full-time gardener who will run working gardening holidays at Gunby,” Colin explained as we started our walk around the grounds with their three dogs bounding along beside us. There are extensive stable and carriage blocks around the Hall’s courtyard and plans are in place to renovate their existing accommodation so that there will be holidays held at least one week each month. Details of holidays which are currently available can be found on the National Trust website and it is hoped that by going on the RHS approved list the national profile of Gunby will be raised.

The gardens are stunning, from the elegant borders brimming with specimen plants, to the walled Victorian garden and the carp pond and orchards, which stock over forty-eight varieties of apple trees and twenty-one of pear.

Later in the autumn, filming will also begin at Gunby for an episode of the television series Country House Rescue, which advises country home owners on how to make their properties more viable. Colin and Gareth have already got their plans rolling so I asked why they had volunteered to be part of this series which will be shown between March and May 2012. “Hopefully, it will be another way of making people aware of the house and who knows, they may come up with a dynamic idea that we haven’t thought of which we will readily embrace if it is right for helping to secure the long-term future of Gunby,” Colin concluded.

“Meanwhile, we are really enjoying this as our country home and sharing it with our visitors during the day. When they have all left we can sit, entertain and relax in these elegant and peaceful surroundings and feel really content that I booked that viewing.”