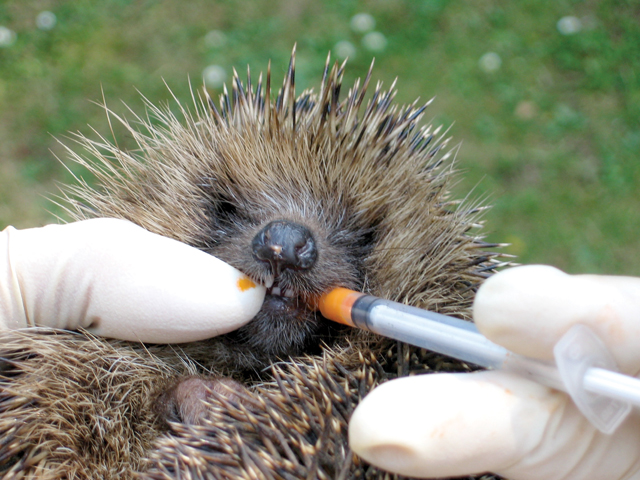 A hospital and home for hedgehogs

In a bid to help ensure their survival, Lincolnshire woman Angela Smith devotes her time to nurturing sick and injured hedgehogs at the special rehabilitation and retirement centre she runs from her home in Old Leake, near Boston.

Since launching Caddington Hedgehog Hospital in 2003 she has taken in more than 2,000 poorly hedgehogs – releasing more than half back into the wild – and has also written a book about caring for them.

“I’ve got a real fondness for wildlife, and I find working with the hedgehogs challenging,” explains Angela, who had very little knowledge of the creatures when she first started.

“Problem solving is a challenge, with a limited time to react. I enjoy working with them. It’s great fun and there’s a real sense of achievement when these animals trust you.

“It’s amazing that they let you handle them; there’s no reason they should, as they have never been touched by a human before.

“When I first started, I contacted my local vet, who shadowed what I was doing with each new casualty and as the years progressed I did an awful lot of procedures and treated the animals myself.

“We were a very good team but after five years working in the shadow of the vets, I felt confident in dealing with most problems myself,” she adds.

Originally the hospital was in Bedfordshire, but on moving to Lincolnshire in 2009 Angela re-established it at her new home, which has a walled garden where the animals that can’t be released back into the wild can spend their twilight years.

“If anyone finds a hedgehog and has concerns about it, they just need to ring the house and bring them in, contact their local vet or call the British Hedgehog Protection Society,” says Angela. “If a hedgehog is seen out during the day there’s a ninety-five per cent chance something is wrong with it. They’re typically nocturnal.

“A hedgehog sunbathing is a common description I get, which I know means something is critical. From January through to April I find it’s mainly adults coming in with conditions like lungworm which can kill. Another common one is ringworm – you can tell this as the spines start falling out and there are abscesses under the skin. They may also look rat-like if the fur has gone from the face.

“A baby admitted in around June or July is usually dehydrated and hypothermic, orphaned or the runt of the litter,” says Angela.

From November to March Angela has around sixty hedgehogs in her care and this sheer volume of work has led to her giving up her job to devote all her time to hedgehog preservation.

“I can spend all day on two animals or get sixty done within six hours; it all depends on the problems they present,” she explains. “I do it all myself and only take on as much work as I can, but I’m pleased to say I’ve never turned a hedgehog away yet.

“The most I’ve ever had at one time was eighty when I was in Bedfordshire. I’ve got a system now that I’ve developed over the years, and I’ve learnt to streamline things so I can get everything done more efficiently.”

Angela models her centre on a cat re-homing sanctuary she once visited, which was impressive with lovely grounds, and where people felt comfortable leaving an animal.

To keep the hospital going, Angela raises all her own funds. She has her own equipment but needs to make enough to cover the cost of insurance, food, bedding, cleaning products and vets’ bills.

“It’s all done voluntarily and costs about £1,000 per year. It used to be the case that most people bringing a hedgehog made a small donation too, but now I’m finding the majority don’t; although we’ve had a few generous sums over the past couple of years.

“I have had to be more pro-active in my fundraising and so I give talks to groups. This year I’ve also started doing cream teas, where people can book in for a visit and I have craft stalls and nursery plants too. They seem to be quite popular.”

Angela has also written her own book, Hedgehog First Aid, detailing how to care for sick and injured hedgehogs, which is available priced £5.

“There are some fantastic books out there but personally I found them too detailed. They are quite technical about the kind of drugs to use etc. I took it back to basics, rather like the Delia series on how to cook an egg. It deals with the first stage, how to identify a problem and how to deal with it yourself – how to provide really good first aid care utilising foodstuffs and equipment found in your kitchen,” explains Angela.

“It’s one of those old wives tales but hedgehogs shouldn’t be given milk. They are lactose-intolerant and cannot digest it, which a lot of people don’t realise. If you do feed them, then water and dry chicken cat food is the best, or mealworms, or crushed peanuts.”

Despite the numerous cases over the years, these creatures never fail to enthral her.

“I’ve got several in the walled garden that can’t be released and they just delight me. If a hedgehog comes into your garden it’s a good benchmark of how healthy it is – you’ve got a good diversity of bugs and grub. It’s a compliment for them to come.

“Even now when a hedgehog comes into our garden I still find it exciting. But they are on the endangered list – that’s the first rung. They are not protected but it’s important people are aware there’s a potential problem and what’s going on. These animals need all the help they can get.

“If you do find an injured one, pop it in a bucket and find some help as soon as possible, whether that’s by calling me, the local vet or the Hedgehog Protection Society.”

For hedgehog advice or to make a donation, contact Caddington Hedgehog Hospital on 01205 872135. Animals are only admitted by appointment. You can follow the centre’s blog at caddingtonhedgehogs.blogspot.co.uk